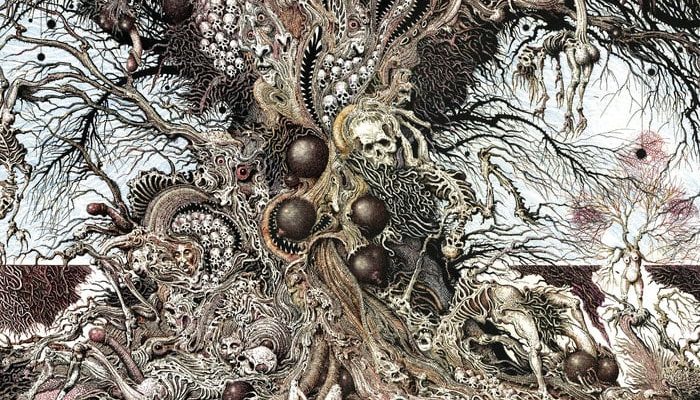 20 Buck Spin is one of the major labels that has kept a strong and constant roster. Fifteen years since establishment the growing label presented various bands that showed their devotion to old school death metal. Among the roster of these qualitative groups are California’s death/black metal outfit Ulthar who became notable with their impressive take on extreme metal in general. A few years after the release of their debut album, Ulthar returns with yet another bold release driven by the frantic tempos, frenzied screams and solid song composition. As one of the contemporary bands that formed its own musical niche, the latest effort has exceeded my expectations. Providence delivers grooves and technical progression. The current lineup includes Steve Peacock (vocals, bass guitar), Justin Ennis (drums) and Shelby Lermo (vocals, guitars) and the name of the band is named after the famous short story of H.P. Lovecraft “The Cats of Ulthar”.

Their debut album Cosmovore successfully captured the dreadful themes of grotesque but the band even went beyond that as they sprawled over the virulent attacks of the dual vocals. With such grotesque imagination, the songs are spawned by the array of primitive raw black metal. But even this description doesn’t define the direction of the band. Ulthar on their second outing will take the listener to the rudimentary stages of death and black metal. From the opening track Churn, the guitars and bludgeoning percussion create a massive wall of sound. The album is measured by the amalgamation of monster-sized riffs and repulsive guttural growls. Ulthar wraps the madness of cosmic horror throughout the eight new tracks. Providence roams across the grimy styles of old school black metal there is also emphasis on creating a spooky atmosphere.

The sophomore album has many tempo changes and the band is utterly unpredictable through the song patterns. Vocalist and guitarist Shelby Lermo (Vastum) draws his deathly guttural growls, adding more brutality to the songs. Providence is a raw and organic mixture of many elements, on the second track Undying Spear for instance they are reminiscent to Immortal. The chilling acoustic notes feel overlapped between the old school black metal. Steve Peacock’s growls are manifested by raspy growls which he’s been spewing out since Cosmovore.

Although the musical qualities here are somehow close to Necrowretch and Absu, the trio displays their technical prowess. Drummer Justin Ennis maintains the tempo and provides sonic blasts. Over the span of thirty minutes the drums become complex, not at all devoid of blast beats and heavy tempos. Ulthar showcases their unique musical expertise adding various elements from progressive death metal.

Fourth track Through Downward Dynasties opens with a mysterious sci-fi intro. After which the clear display of organic percussion and blackened rasps, including twisted riffs are brought by raw levels of aggression. From the variety of these labyrinthine song structures, Ulthar shows their technical ability in molding the song composition. Cudgel is brought by pulverizing drums and gnarly growls that constantly keep on changing from demonic rasps to deep growls. Much of the musical components on Providence are brutalized by the dissonance and injected tremolos. And it seems that the trio has achieved unprecedented levels of raw death metal on their latest effort.

Furnace Hibernation is built on the intensity of swirling riffs. Providence is combined with instant riff barrage and creates a huge impact when the songs take a furious and aggressive direction. Narcissus Drowning edges on speed and tremolo pickings. On this track, the riffs engage bizarrely at times, where Ulthar verges upon the edges of the cavernous death metal. But their blackened inclinations are quite prominent and gives the album a complex experience. Humanoid Knot is achieved by sophisticated riffing compounds whilst the drums vary from a slower tempo to blast beats.

Providence has no limits to the levels of influences as the band takes full focus to deliver each track with a striking scale. Ulthar has once again reached a high plateau blending their craft with abrasive blast beats and blackened riffs. The sophomore release has quite some originality to it but what matters the most is that Providence will likely please many fans of death/black metal.