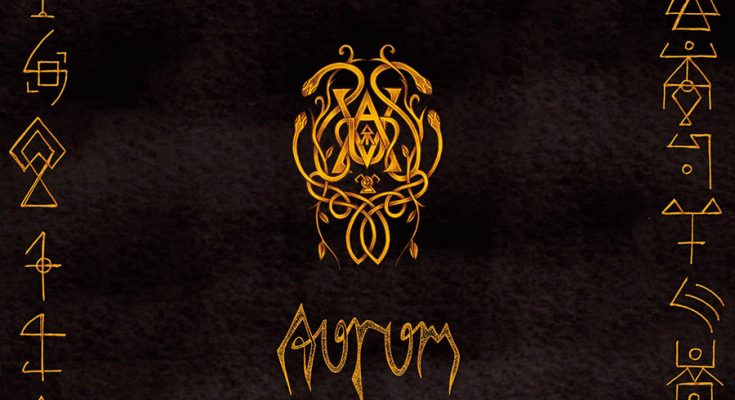 Oslo, Norway-based Urarv is set to release their debut album Aurum on the 22nd of September through Svart Records. It was the first time I heard of this band which was explained to me as being black/folk metal. The music I heard was, to say the least, not what I expected.

The album starts off with Forvitringstid. It starts off slow with a nice harmony of bass and guitar. After a while the music fades, just to get going again with the drums and vocals. The growl at the beginning of this part could have been a bit heavier though. You can tell this band is experimenting with several things, such as back vocals doing some kind of marching song and frequent uncomprehendable, untuned screaming. It does add a layer of effect but it gets a bit much. Well, it does for me at least. What I do like though, is that every time something so random happens, the mood of the song changes. Maybe it would make more sense if I actually spoke Norwegian.

The second track, Ancient DNA, is also rather weird. A cool kind of weird though. You think to yourself “What is this??” but at the same time you find yourself nodding along. There’s just so much going on in the song. From guitars that sound like they’re getting detuned while playing, to the high-pitched screams from singer Aldrahn. Although there are many different aspects to like about this song, there are as many things to dislike. In the end, it all boils down to personal taste.

Starting off the same way as Forvitringstid is song number three: The Retortion. After a few songs, I managed to finally understand what this band is singing. All be it very hard to understand since the guitars and vocals both have very high pitches. Again though, it’s a fairly catchy song despite the endless varieties within it. What else is there to say about the next song Broken Wand? Nothing really, more of the same, only different. It may seem controversial but you’ll only truly understand if you give the album a listen.

Guru, the fifth song is in my opinion the best track on here. Why? It seems more consistent than the other songs. There are a few small experimental pieces but they don’t stand out as much. To me this is one of the most purely black songs you’ll find here and probably the only song I wouldn’t mind watching live.

Following is Valens Temple. It’s kind of refreshing to have no singing for over 2 minutes. But, of course all good things come to an end and this is not much different. I know Aldrahn is trying to create an atmosphere with his vocals and in some aspects he succeeds. But for me the intensity and regularity in Valens Tempel is too much to bare. It’s a shame because in the beginning I thought this could make a worthy second favourite. And then: Fancy Daggers. A pretty fast song which has a chance to get a crowd going. The vocals aren’t that bad either… up until the whistling that is. But hey, at least it fits in better with the rest of what’s going on here.

Last (and longest) track of the album is Red Circle. With its unusual sounding intro, I have to say: I like this song. Not in a way that I would put it on repeat. More in the sense of not skipping it if it were to end up playing in my car. The things they do actually fit and don’t seem random like in many of their other songs. There’s a bit of chaos but it’s organized and isn’t overpowering. Although the nine minute mark is a bit high, this was a fairly nice ending to an otherwise interesting album.

In short, a lot of this album reminds me of Death‘s zombie ritual, with effects. It’s okay for one or two songs but after that it gets pretty boring, pretty quickly. I will hand it to the band that they manage to put out a decent amount of variation to keep it partially interesting. It’s just not the kind of variation many people out there are looking for. While looking these guys up, I came by a quote by the singer that explains why this music is how it is.

The ideas and visions for Urarv started actually back in 2003 during a stay that I had at the local mental institution where I live. It began dawning on me one evening as I was locked out on to the perimeter of the facilities to have a stroll.

Now, I don’t know what it’s like to be in a mental hospital but I can imagine that it would feel something like Urarv‘s music. Which, in turn is why I would suggest it to people that like black metal and don’t mind it getting mixed with an exceptionally high, eerie “what the fuck”-factor. I would however not suggest it to people that, like me, were informed this was a folk metal band.