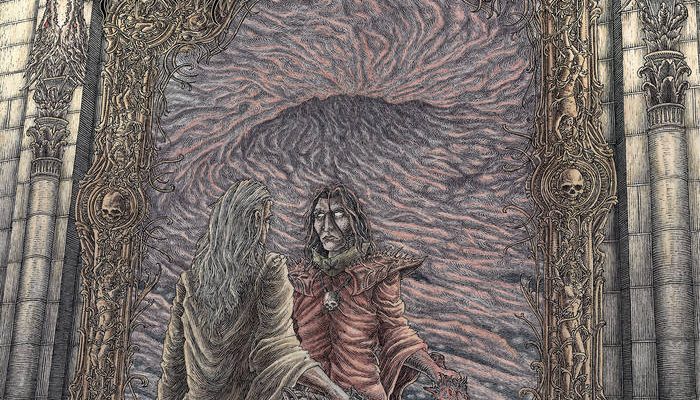 Hailing from Cincinnati USA, Valdrin is a trio piece band that plays a dynamic kind of black metal with melodic semblance. While it’s wrong to judge a band from the album cover I was somehow curious to give this band a listen since the album artwork is very artistic and deals with mystical drawings. Two Carrion Talismans is the band’s second album and broods over haunting melodies while it builds into a stronger attachment to the second wave of black metal.

Junnatox begins with aggressive guitars and spooky keyboards that spawn an obscure sound. The mixture of blackened metal with synth to add dark passages to the songs is what the band attempts to do on this album, even though Valdrin isn’t a symphonic black metal band but somehow they lean towards the use of an abundant usage of synth.

Nex – The Barren Sculptor is straight black metal song laden with tremolo pickings, the vocals are very typical in the sense of the blackish growls. In the past the American black metal scene has brought many bands that become widely recognized today like Absu, Black Funeral and Vesperian Sorrow. With the rise of newer bands like Nightbringer, Uada, and Wolves in the Throne Room, it’s likely to come across many musical groups who have left an impression upon the fans. The early 90’s era was very influential on the American scene but it seems the newer generation of bands has developed by time and this is to say that Valdrin is one of those bands that has all the required qualities which qualifies them to be more recognized.

Two Carrion Talismans ignites the flames of melody, there are many creative elements which makes songs like Sinews of Blood and Vein a perfect soundtrack to a horror movie. Valdrin blends the brutality of death metal with the melodic aspects of black metal, the guitars and keyboards are played to manifest the dreadful soundscapes along with the blackish shrieks. And if I would compare their style to any band then I can only think of the Carach Angren’s debut album “Lammendam“. The twist of sweeping  melodies and the heavy riffage swells with energy, while the lyrics are related to ancient mythologies and occult the music itself provides a gloomy experience to the listener.

Funeral Tides of Orcus is dominated with aggressive guitars, the production is very clear and the song combines some fast entwining solos with powerful execution and memorability. The transition from one track to another feels more linked than a sudden halt. Tempest Torn Asunder is a robust track where the scorching riffs sound powerful and pushed upfront. As for the drums they are very intense, yet upon reaching halfway to the album I must admit that Valdrin has shaped there newer album with more darker and melodic approach however the melodies here are not uplifting but more focused on created haunting atmosphere and Vesper in the Animus Liar is a another great example to such paradigm.

Yet their most epic and darkest track is Crimson Blades In The Ausadjur Wake which has an epic feel and performed outstandingly, in my opinion this track can be picked out as a dark fantasy soundtrack. The fanciful and surreal qualities are very catchy, from the ominous synth, the powerful amplified guitars with the addition of spoken passages and the serpentine solos that adds another glorious feel to this dramatic song. So finally I can say that Valdrin has crafted a unique and important album in the band’s musical career, this is surely a great album!!