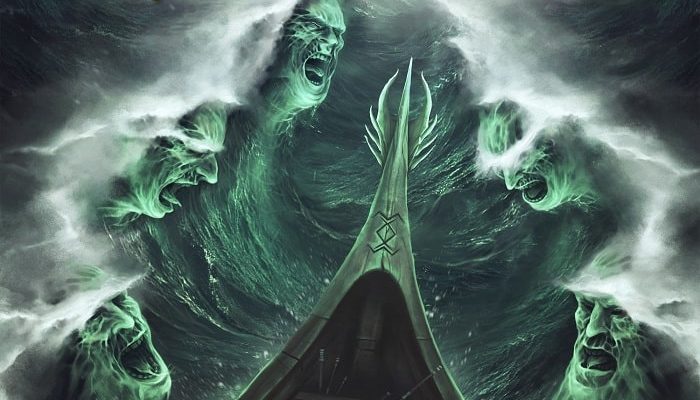 Discovering new music has become a challenge since Covid-19 broke out and there are no concerts or festivals going on. So I decided to write a review about a band I haven’t heard of before. Vexillum is an Italian folk/heavy/power metal band. An interesting combination of metal styles, but that’s what triggered me to have a listen to their latest album ‘When Good Men Go To War’. The cover of this digipack cd shows us a ship sailing through a rough sea, an image that fits the title.

This album knows a great, yet odd start with ‘Enlight The Bivouac’. It has a folky intro with in the first part a nice, danceable rhythm. Dario is a strong vocalist with a wide vocal range. His singing style is a bit similar to Bruce Dickinson‘s, with high energy and a lot of intonation. The backing vocals of the other band members makes the vocal impact of ‘When Good Men Go To War’ even stronger. A great start as I said, but this song also knows a second part, which is completely different. It’s more epic and vocally more symphonic and it even made me think I was already at the second song.

Apparently it’s the outro of the first song that leads us to the second song ‘Sons Of A Wolf’ with grunting, running and howling sounds. This song starts with epic guitars and it knows heavy, powerful parts and calmer parts. In every song there’s a typical power metal guitar solo in the bridge, but in this one the solo consists of a guitar duet between Francesco and Michele. They also do this kind of duet in ‘Voluntary Slaves Army’. They sound great together and those duets make the bridges even better than with a classic solo.

As I mentioned before, Vexillum brings an interesting combination of folk and power metal. There are some typical folk songs like ‘The Deep Breath Before The Dive’ and ‘The Tale Of The Three Hawks’, both lively and danceable. The band uses instruments like the Irish flute and bagpipes. There are also typical power metal songs like ‘Prodigal Son’ and ‘When A Good Man Goes To War’. They’re as epic and heroic as can be and the guitar solos add the finishing touch.

I like both styles, but in some songs Vexillum tried to combine both and I’m not sure whether I like it or not. ‘Flaming Bagpipes’ is the best example I can give. The song begins as a folk song with bagpipes, but it doesn’t take long before it turns into a power metal song where the bagpipes are brought to the background. It gave me the feeling the only reason the bagpipes are used in that song is the title.

Vexillum is both musically and vocally a strong band. All the members are high skilled musicians and they play very well together. ‘When Good Men Go To War’ is a very varied album because of the combination of folk and power metal, yet I missed the right balance between the two styles. This album sounds more like a symphonic power metal album with some folk songs in it. Vexillum is without any doubt not afraid of experimenting with music, but I think this band is still searching its sound. But I’ve got the feeling once they find it, their musical stories will sound amazing.