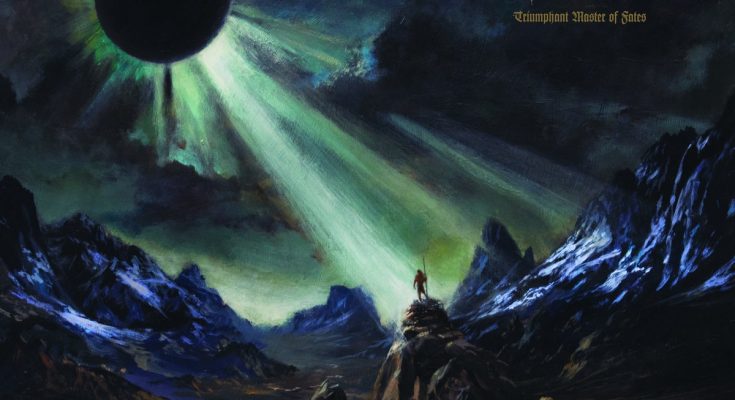 In the Norse mythology Vimur is the largest Elivagar Rivers that were created before the beginning of the world. Superlative black metal outfit Vimur is one of the matured and modern paradigm of the U.S. black metal evolution. As a result of their high talents their second album would certainly appeal to many fans as an above standard black metal. This quartet exhibits some recognizable guitar tonality “Triumphant Master of Fate“, is a raw black metal album which has a natural sound of progression.

This is not a traditional black metal that romanticized about the ideologies of black metal. Yet it has a splendid modern quality, Vimur have earned a certain criteria which many U.S. black metal bands should have obtained such class in presenting their music. Not to say that other U.S. black metal bands lack that level of quality. What attracted me the most about the album was the artistic and the epic picturesque album cover art of mountainous scenery colored with vividness. Vimur is comprised of guitarist/vocalist Vaedis Eosphorus, bassist Kiehül Hesperos, drummer Ætheous and the guitarist Australis.

The musical texture of the second album is filled by the exuberant melodic tunes and they are nicely inserted into the tracks. Now the musical style comes close to the Scandinavian black metal bands such as Naglfar and Dawn. Opening track Seditious Apertures veers into shimmering melodic portions, and high pitched vocals which have the signature vocals of the most renowned black metal bands. Strong guitar lines embodying aggression and hyper blast beats performed, every musical element of the total seven tracks have its own style.

The second track Consumed by the Source is an epic black metal track and designed with potent riffs, the album includes many tempos and induced by rapid tremolos. But it doesn’t get any better than the following track Adversarial Impetus Ignition which in my opinion is their most powerful track on the record. It begins with catchy melodies that are burrowed from post metal techniques and creates, a shuddering melodic sensation and throbbing blast beats played in full intensity.

Riffs are utilized powerfully with rapid tremolo pickings allowing the music to shift at breakneck speed. Triumphant Master of Fate is soaked in melodic patterns, and these kind of harmonies are akin to bands such as Naglfar, and Dissection. While I insist that Vimur do have their own signature style, most of the tracks accelerate at high speed. Drums are unleashed by sonic velocity, the riff engagement is staggering and well crafted. Each department is remarkably diverse including the drums that cause catastrophic vibrations. One of their fastest and staggering tracks is the mid-tempo Nuclear Desecration which portrays the Nordic black metal style in every nuance.

The vocals on this track are highly pitched and reverberates with piercing screams. What I like about the band is how they create a spectacular atmosphere, the slow and doomy guitar dirges on Our Dearest Hopes Lie Buried Here is where the vocals shines the most. The riff work is beautiful ranging from raw black metal to aggression, yet diversity might be the key which the band holds. The epic closer Supreme Preemption of the Lightless Empire begins with ultra-fast blast beats and raw guitar riffing.

There is a good balance between the contrasting melodies and aggression, and the band still offers a plenty of rhythmic riffs including the surprising parts of the clean guitars. Though the tracks are confined within the domains of mid tempo, but as in whole it seems that every idea was successfully implanted into the song structures. Vimur‘s sophomore album possesses the quality of raw black metal, this is a very good album from the U.S. quartet.