Home Black Metal Vitriol – To Bathe From The Throat Of Cowardice 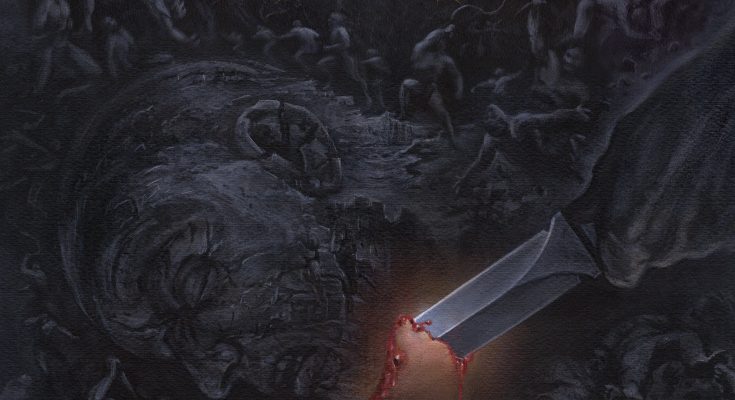 North-American death metal band Vitriol hasn’t been around for very long yet, but they put themselves on the map in no time. With their 2017 EP Pain Will Define Their Death, they gave the underground a new level of brutality. And it seems that it won’t be too long before they break through to the bigger audience.

The Parting of a Neck is the first of 10 tracks, all with titles that fire one’s imagination. Though the death metal dominates the entirety of the album, the black metal influence can’t be missed. This first track has a part that features the classic black metal formula with the screeching guitar and bass playing the same fill. The Rope Calls You Brother is another example of one of those song titles that gives you cold shivers. The slower heavy part (Is this the chorus? We’ll never know.) makes this one of the most catchy tracks of the record. Right next up is A Gentle Gift. Marching drums introduce the song, followed up to the grooviest riff on the album, matched with almost Dimebag-like guitar work, yet the guitars in Hive Lungs have more of a Kerry King-like vibe to it.

The album reaches it climax with the final song Pain Will Define Their Death, the title track of their 2017 EP. Though the sound of this album is not exactly to be called anywhere near ‘clean’, their EP has more of a rawer edge. Because they recorded a song again for this album, it is to be debated which version is the better one. But one thing is sure: the lovely disgusting vocal break in the middle of the song sounds even more raw and nasty on the EP. Though the new version fits better with the totality of this full-length.

The black metal influence together with the blast beats sometimes give off an early-Behemoth vibe. Then again Crowned in Retaliation‘s opening riff is reminding of Morbid Angel‘s Where the Slime Live, about 10 times more chaotic that is. A touch of Slayer, and obviously the technical aspect of this album can’t go unnoticed. All these kinds of death metal are mashed together into this piece of perfectly structured chaos. What a way this is to kick off your career! Keep an eye on this band, Vitriol is certainly not done with us yet.