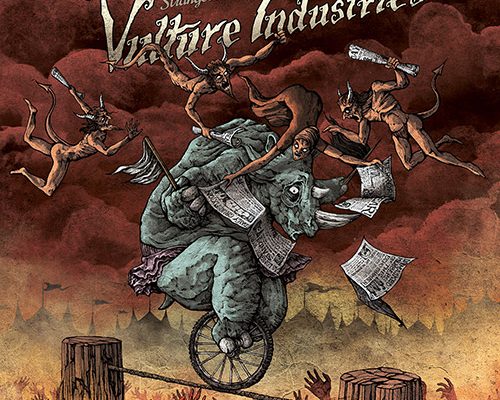 Norway will forever be associated with the rise of so called true Black Metal, yet it is also the place where a lot of the more progressive, experimental and avant-garde oriented bands have been born. Ved Bues Ende, Bak de Syv fjell, Arcturus, Mysticum, Solefald etc. are all bands who found their foundations in Black Metal but who were also the initiators of some entirely new subdivisions and experimentations within the genre. Vulture Industries can also be somewhat placed in this succession though again in a completely different way. In 2007 they released their debute called The dystopia journals, which still had some remnants of the post-Satan worshipping bands in it. Now we’re 10 years and 3 albums later and their sound has completely transcended into the realm of progressive metal cleansed of every resemblance to Black Metal.

It is safe to say that this is their most accessible record to date. It is possible that some people never listened to the compositions of this quintet because of their vague link to the bands from the past but unfortunately they missed out bigtime and hopefully they reconsider and let this band into their lives. Even though this is not a plea against rooting out all presumptions against certain genres it is a call for people to expand their horizons beyond the point of labels that people put on music since the origin of the bands or some of their members.

It is even so that Stranger Times is actually quite a catchy and sometimes even poppy album but this is certainly not meant as a degrading remark since its compositions are very intricate and versatile. The clean vocals of Bjørnar Nilsen can be very warm and soothing, it can be ominous and threatening at the same time. The raw vocals and screaming that were used as an interlude in their previous work have completely disappeared but this is not a bad thing since they are not missed at all and would even be somewhat misplaced in this record. The subject matter has been preserved and even though the previous remarks about the vocals dystopia, the fall of civilisation and mankind are still the focal point of Stranger Times.

It is very remarkable how Vulture Industries have been able to preserve the steampunk and even fin de sciecle feeling throughout their discography, even the strange references to late 18th century circuses have been a recurring theme in their career. This can’t be compared to any other band and is what really makes them stick out, even within the avant-garde and progressive scene. In some kind of way you could say that this has become their trademark just like the pirate theme is for other bands but with the important difference that this one is unique within the whole band spectrum that is out there.

The music in itself is more slow and less exciting than some of their previous work but this makes it only more captivating and mesmerizing to the listener. This doesn’t mean that it is more directed towards doom metal but more in a sense like the direction Enslaved has took in their latest endeavours. The combined guitar riffs of øyvind Madsen and Eivind Huse makes for some very intricate and virtues melodies. The backing vocals of Eivind are also more pronounced than they used to be which makes the music more into a whole and very pleasant to daydream to. That this is the perfect food for dreams can be noticed in their last video for the song Something Vile. All in all this is a very nice album which illustrates the fact how a band can evolve and how genres can drift apart into something completely new and beautiful.