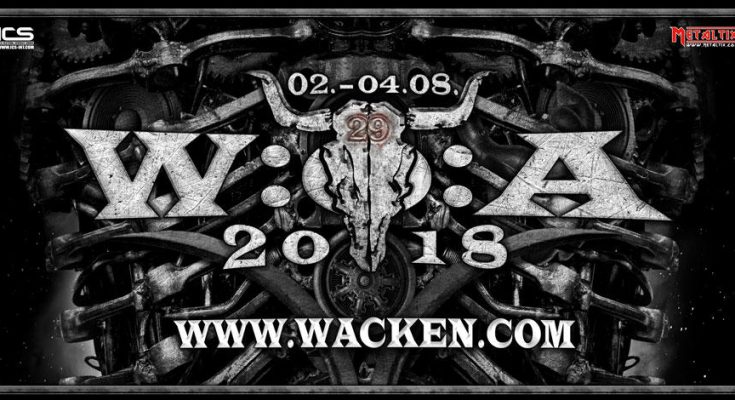 Saturday Started of with Betontod (***1/2). A German band that knows how to party in the early hours. Even though my German is crap, I managed to sing (or rather hum) along with a couple of their songs like ‘Kuss Mich’ and ‘Keine Popsongs’. Pretty much everybody who was already up and on the infield sang and danced along.

The Charm the Fury (***1/2) set the W:E:T stage on fire. With songs from older albums and songs form their last one ‘The Sick Dumb and Happy’, moshing and circle pits were a fact. Also here became clear that the crowd is so important. I have seen them live before, but if the crowd is dead, the band can try as hard as they want, but the show will not feel the same. Luckily, Wacken knows how to party and, as this was the biggest show The Charm the Fury has done yet, it was one awesome show. Unfortunately their signing session got cancelled. I still have no idea why, but nothing we can do about it. We did get some cards though. You know, the cards where you usually let the bands sign but then without the signatures…

ALESTORM! (****1/2) Alestorm is amazing. I have talked about partying before, but I had never seen Alestorm before. This band easily doubles the amount of beer that’s consumed in that hour that they played. I’m talking about crowd surfers, many many crowd surfers. Even crowd surfers on top of crowd surfers that are literally surfing on the crowd. I’m talking about sitting on the floor and rowing with a bunch of people. I’m talking about a rubber ducky that was safe and sound on stage and then got thrown into the pit and bounced around before it got devoured. Also, gay dolphins, just don’t ask why. Ah yeah, and I’m talking about singing in dog on their second to last song ‘Wenches and Mead’. Why? Because pirates (and dogs) are awesome. Lead singer Christopher Bowes ended the show by telling us how he really felt about us with the song ‘Fucked With an Anchor’. Listen to it, you’ll understand. 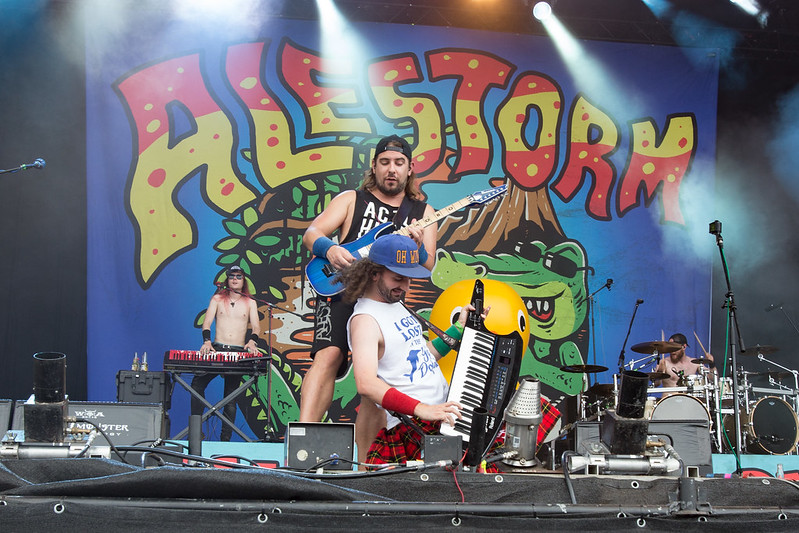 Steel Panther (***) was sexy as always. A lot of talking and not so much of playing songs, but that is Steel Panther. They are more about the show (and the naked ladies) than about the music. Nevertheless, they have a solid sound. One after the other girl started stripping and ended up topless (as people tend to do at a Steel Panther show). One of them, Jessica, got on stage. She got to sing along some parts of ‘Girl Form Oklahoma’. This was followed by a couple of dressed and a lot more topless girls (and one dude) on stage during ’17 Girls in a Row’. Security chased them of stage when they started to play the next song ‘Gloryhole’. Well, that was quite the experience for my first Steel Panther show I have to say. Although if you’ve seen one show, you’ve seen them all I think. But let me confirm or disconfirm that once I’ve seen them more often.

Arch Enemy (****) probably had the best sound quality of all the bands at Wacken. They literally blew me away. Opening up with ‘The World is Yours’ and closing with ‘Nemesis’, this was one solid performance with no flaws. Not that I heard at least. Just one overwhelming power from a band where everything just fits into place.

Helloween (*****) was the pearl of the evening, the cherry on the pie, the diamond on the ring, the… It was beautiful. Not knowing that much about Helloween beforehand, I went into this show with a blank page. As this was the “Pumpkins United” show, previous singers Kai Hansen and Michael Kiske were there too. Current lead singer Andi Deris was there as well, of course. Mostly they were playing older songs since Kai and Michael were there now, with almost no recent songs. It was a really cool throwback to the older years of Helloween and I’m sure we can enjoy the recent songs in the future as well.

We got to enjoy a 2 and a half hour show with songs like ‘Halloween’, ‘I’m Alive’, ‘Are You Metal?’, ‘Perfect Gentleman’, ‘Starlight’, ‘If I Could Fly’, ‘Pumpkins United’, ‘Sole Survivor’ and ‘I Want Out’. In between the songs there were little sketches of 2 pumpkins and at the end there were pumpkin balloons for the crowd. There was also a drum solo from drummer Ingo who sadly passed away. Their present drummer Daniel Loble drummed along with Ingo’s drum solo.