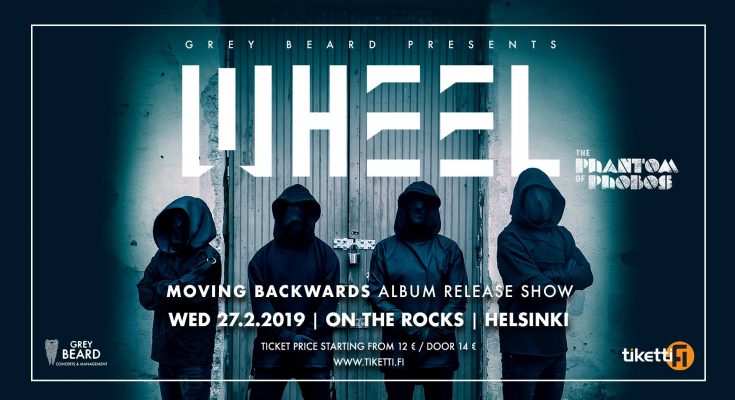 Recently I discovered my new favorite band: Wheel! Consisting of some of the top musicians you can find in the Finnish heavy music scene, they recently released their debut album ‘Moving Backwards’ and they blew me away with it. The music goes in the proggy direction of bands like Tool and Soen and is clearly painstakingly crafted into perfection. So when I got notice that they’d be having a release show at On The Rocks in Helsinki, I felt like I couldn’t miss out on a band that delivers music of this magnitude!

Before the main act took the stage, we got to enjoy the very first live show of The Phantom of Phobos (***). This Finnish prog band is getting ready to release their new album later this year and bring a more atmospheric and in a way calmer kind of heavy music. Clearly every single member are talented musicians and the vocals of their frontwoman were pretty much spot on. And while I really enjoyed the calming and almost trance-inducing songs when I checked them out before, live the same magic didn’t always seem to come across as well to me. 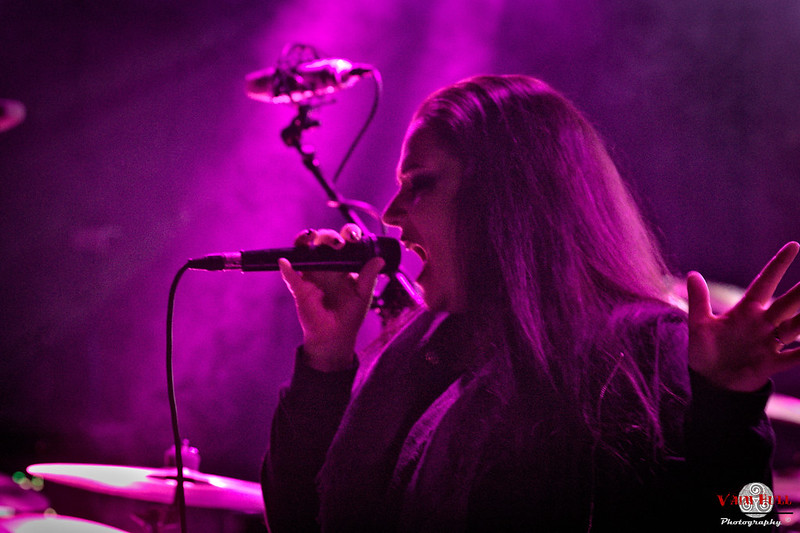 A bit of a letdown maybe was the backtrack playing, which sometimes seemed to contain even guitar melodies. Makes me wonder if they’d maybe need an extra set of hands or two to make their music really come fully alive on stage. One of the tracks also had the bass way to loud mixed in, which overpowered the atmosphere of the song. A bit of a pity, but still a very strong first show of a band with loads of potential! Which was clear from the appreciation shouted by the crowd that came closer to the stage near the end of the gig. 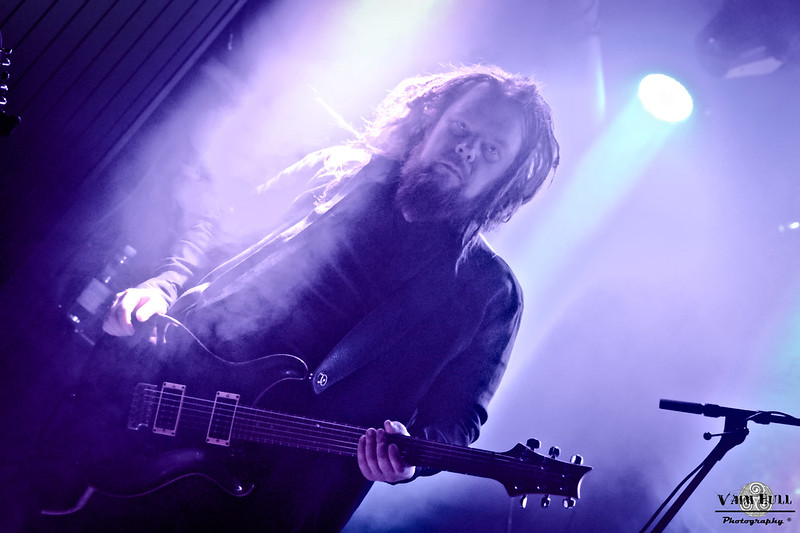 Setlist:
Phobia
Collide
Brother Mine
Them
No Signal
Made of Stone
Of The Undead

And then it was finally time for Wheel (*****)! Four hooded figures came on stage, bathed in colored light and smoke and without any introductions, they kicked off a set of mind-bending music that would blow everyone’s mind there! It being the first time ever they played the tracks from ‘Moving Backwards’ live, they managed to make it sound as groovy and organic as it did on the album itself. Shrouded in mystery, hiding any and all features they cranked out their complicated songs as if they lived and breathed the music. 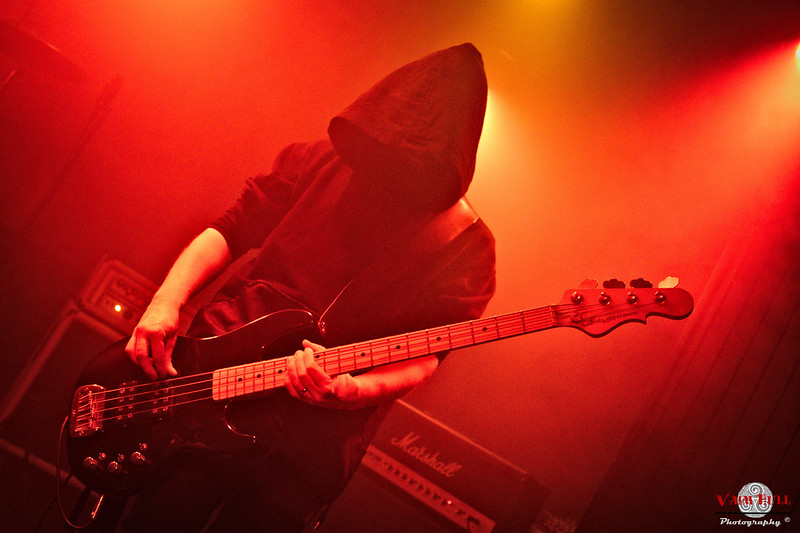 The rumbling and often bouncy bass lines keeping the groove going, the contradicting and fighting guitar rhythms that induced many heads nodding, the relentless pounding of the drums setting the rhythm and damn impressive vocals all sounded as if I was blasting the music through my headphones as I’ve done plenty of times by now. After a while, one by one the band members revealed their faces except for the bassist who stubbornly kept staring at his snares from under his oversized hood. 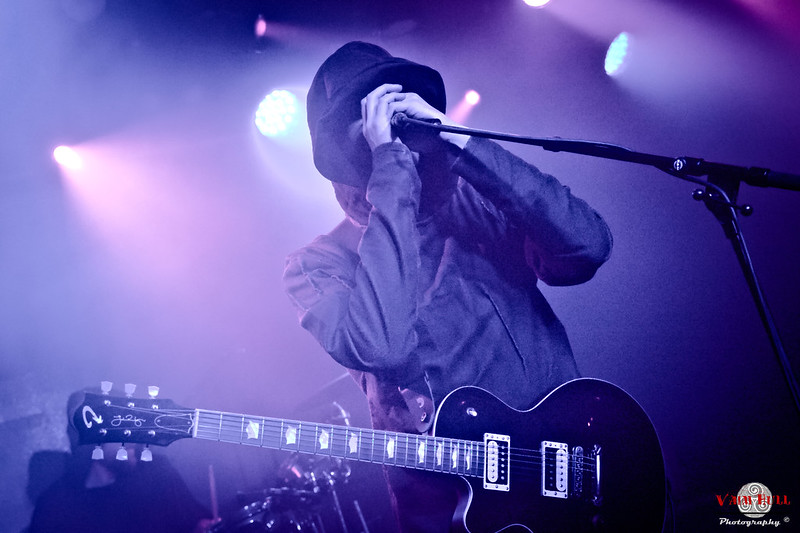 There wasn’t much interaction with the crowd, but that was not necessary at all. Rather charismatic vocalist/guitarist James promised us to try and think of something useful to say the next time they’re playing live, but for now they’d let the music talk. We didn’t ask for more. After playing ‘Moving Backwards’ from start to finish, James thanked all who were there and expressed his gratitude for the amount of people that actually showed up on a Wednesday night to see them play. Being called back still for an encore song, they played an old one under the form of ‘Please’ before they really ended the show. I can’t wait to catch them again some time in the nearby future and if you get the chance, don’t think twice! 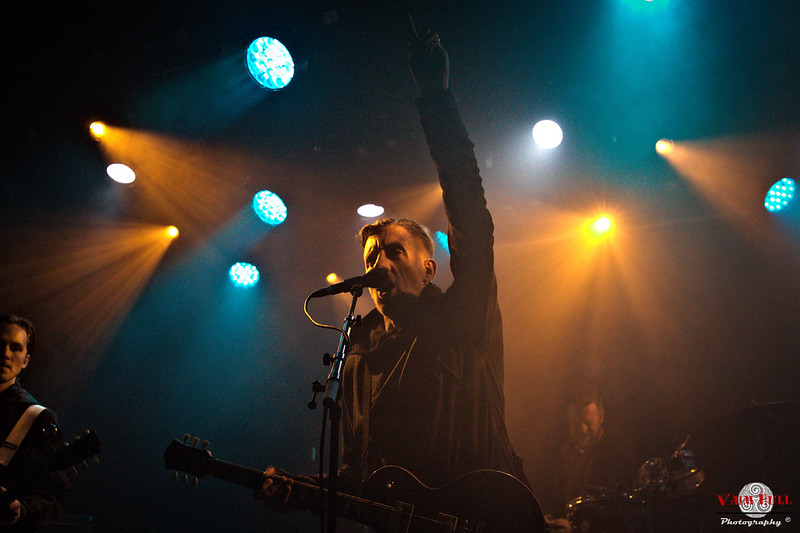 That both bands are musically highly interesting and hold a lot of promise, was very clear looking at the amount of people that showed up at the venue in the middle of the week. I’ve seen bigger and more international bands playing for not even half of what showed up this night. Besides, looking at how many familiar faces I saw popping up from the Finnish music scene just to see these two bands play, should tell you enough as well… I expect great things in the future!