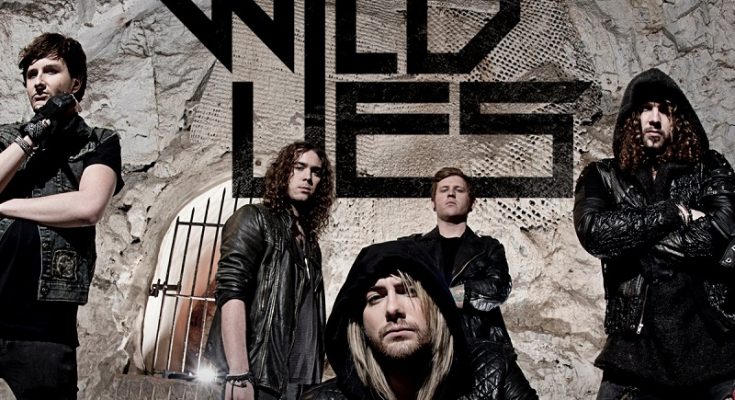 Once upon a time (with the existence of Wild Lies)…

A friendly tour manager came to me and asked “Would you like to interview Wild Lies?”. Of course I could not resist, such spontaneous and handsome men. The band members Zak (lead guitarist), Dylan (bassist) and Matthew (singer) joined us in the press area at Graspop Metal Meeting. One of the first things we talked about was the ‘Belgian dip’, started by ‘master’ Zak. When you take a sip, a micro amount of beer rests between the lips. There you have the ‘Belgian dip’, because of the fine beer in this country. ‘Take a sip he said, it will be fun he said’, and so I was presented some beer.

…We drank epically ever after. 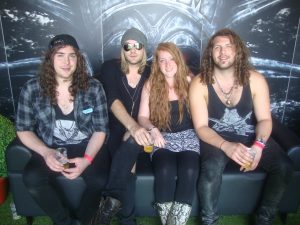 Where did you get the name ‘Wild Lies’ from?
Matthew: The name came up a few years ago. It is very hard to come up with a name that is catchy but also means something. A few years ago, my father and sister were having an argument and I was kind of listening but also not listening. I just heard my dad say “Well, that’s a wild lie” and I thought “That’s quite cool”. She was probably talking rubbish. It just kind of stuck in my head. The great thing about it, is that it can mean so many different things to different people. We have t-shirts out with a cool line on the back. It says ‘70% wild, 20% liar and 10% asshole’.

You have two EP’s out..
Matthew: We released an EP in 2013 when we first got on the scene of ‘Download Festival’. We released a single last year but we got a new EP with the new single, called The Animal. That’s just been released along side this tour we are doing now in Europe. We’re doing good, we are very happy.

How do you see the future or what would you like to achieve?
Zak: As long as we stand on our two feet… We just want to be able to make music and play it to beautiful people. We’ve done this a long time and we have a great combination of what we like to achieve.
Matthew: We are trying to marriage a mix of the great bands we grew up with. So a mix of the old school with the new school. Something that is original but has the hooks and melodies of the bands like Aerosmith, Led Zeppelin… That rock filling thing.

Earlier you said that a meaning is important. So what about the lyrics, what are they about?
Zak: We write a lot in concepts, sort of a speak-about topics. Sometimes we may be speaking about our own lives without realizing it but we always got a concept. That drives the lyrics and the writing.
(A moment of talking at the same time.)
Matthew: It could be a hook, it could be a melody or a topic. As long as you got that little bit of inspiration.
(A little small-talk and laughter with passing people.)
It could be an initial idea and you build yourself around that. Years ago somebody said one word and I liked it, so it can come from many ways. It can develop.
(At that point I was brought another beer by the tour manager, much appreciation here).
Zak: “I’ll dip to that!”

This could be the inspiration for a next song, go for it!
(A lot of laughter and joking.)

How did you experience the first time playing at Graspop?
Zak: Amazing!
Matthew: It was a bucket list thing. We were talking about it and we think the two greatest festivals of Europe are Graspop and Download. I knew about this festival and I always wanted to come. I love this country, we are staying in a beautiful village about 40 minutes from here. I already went to Passendale and Bruges, it’s a beautiful place. It is a lovely, friendly cultured festival you know. This one stays very true to it’s roots: people want to come here and listen to rock and metal which is great. They don’t give a shit about the weather.

I understand, there are bands with a more commercial vibe through time.
Matthew: I will not get into that too much but I agree.

For being such a ‘young band’, are you getting recognized often?
Matthew: We started the European tour in Germany and it’s progressing. I love touring in Europe. They treat bands very well here.
Zak: Technically we are from Europe. The UK is in Europe (laughing). We talk about Europe like it is such an other place. You’ve got the UK and the rest is everywhere else.
Matthew: We are very fortunate to explore the rest.

If you get to play in a country you can choose, which one would it be?
Matthew: Japan.
Zak: Japan yeah.
Matthew: Tokyo would be amazing. It would be very exciting. A lot of the places we’ve visited or went on a holiday, we didn’t immediately thought ‘we’d like to play in Germany’ or ‘we would like to play in Belgium’ but you think of sunny beaches.

How did you guys got together? Was it friendship, mutual interests?…
Matthew: I found them on the street (laughs).
Zak: Me and the rhythm guitarist played in the same band and these guys were with Wild Lies. We played the same gig with each other. They checked us out and we got along really well. I think four months later I was contacted on Facebook, like “Dude we just lost our guitarist and drummer. Would you be interested in getting involved?” and I said “You know what, I will.” That sonic perfection we were looking for, it seemed to work.
Matthew: The relationship was very clear, the working relationship seemed to work. We challenge each other. We all want to bring the best out of each other.
Zak: Musically and personality-wise seemed like it was going to work. It’s like a very healthy relationship. We got in touch with the same interests.

Are you performing with both bands or you stick to this one?
Zak: Just this one.
Matthew: It takes out all your time. You got to pick a band, be willing to take this as a unit and go all the way. You want to go for it ans sacrifice a lot. There are a lot of things we are aiming for. Things are starting to move forward now.
Zak: You are constantly writing, being in the studio…. We got a studio disposable. We are keeping ourselves busy and trying to make the best music we can possibly make.

If playing music was not an option, what profession would you’ve chosen?
Zak: I would be a painter. I love to paint. Or like fashion design. Being creative.

Is there some secret information you want to share already? Something special or unique?
Matthew: We are special and unique (laughs) as a band.
(Some joking).
Zak: We want to touch people’s souls.
And I’ll steal them…
(Jokes were made).
Matthew: The thing is… We have a lot of huge fans out there and that is our main focus. We have been talking about what you pull for like a world breaker. The last tour of Twisted Sister, the little aging of Black Sabbath etc, it gives room for younger bands.
Zak: We want to be out there and perform on stage.

Zak then asked me: “What sort of interview is this actually, for like a magazine?”
I gave more information about our organisation GRIMM.
We ended up on the couch for a picture, having fun and later on I got a little present.

By getting to know the guys and their music, there is a lot of potential. The music indeed sounds sort of new with the addition of recognizable elements from earlier influences. Thank you guys for the awesome and spontaneous chat, the best of luck and hopefully we’ll meet again.