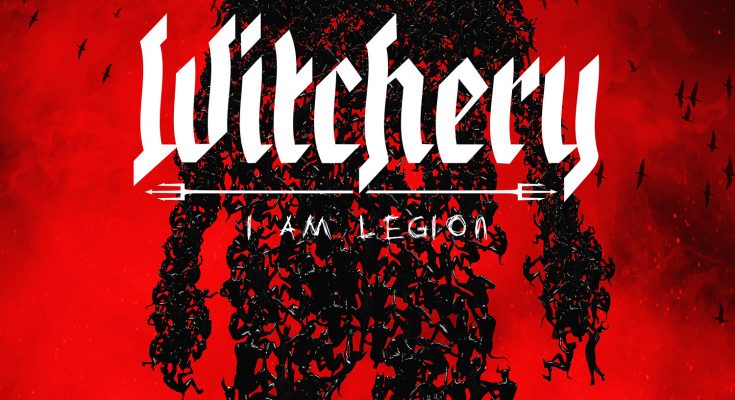 For over 2 decades the Swedish band Witchery has been tormenting the world with their mix of black and thrash metal. After a period of 6 years in which they have produced nothing new, they’ve gathered once more back in 2016 to open their black book of spells and cast the destructive spell that is “In His Infernal Majesty’s Service“. The band has done good on their break, as creativity levels got fully rebooted which resulted in this excellent album and is still very much noticeable in the new album that got released less than 1 year later. “I Am Legion” is the second record featuring new vocalist Angus Norder, who has replaced Legion (ex-Marduk) from vocal duties.

Luckily for us, their creativity does not deplete easily. The new album is filled with catchy riffs that easily get your head banging as if possessed by dark magic and the raw vocals of Norder instantly awaken all demons inside you. The short instrumental intro sounds like a legion of darkness marching to war, which is probably why it’s appropriately named “Legion“. After this build up, the song “True North” opens symphonically and soon starts with one of the most memorable riffs in the album. This song is quite a bit different from their normal style of playing as it’s slower-paced and has a bit of a pagan metal vibe to it.

Norder’s raw vocal style becomes very clear in the following song “Welcome, Night” which is also slower-paced and has the main focus on the vocals. Witchery’s thrashy side comes to the surface again with “Of Blackened Wing” and presents you with more catchy riffs mixed with marching-paced drum pounding. The album really gets up to speed after “Dry Bones” with “Amun-Ra“, where Norder shows off his vocal range again. “Dry Bones” and “Seraphic Terror” reminds me of Urgehal’s Goatcraft Torment album a lot, while “A Faustian Deal” has the black ‘n roll feel of modern Satyricon though still with the cold rawness of Witchery attached to it. Highlights on this album are “True North“, “A Faustian Deal” and “Amun-Ra“, though the entire album is truly worth every second of listening.