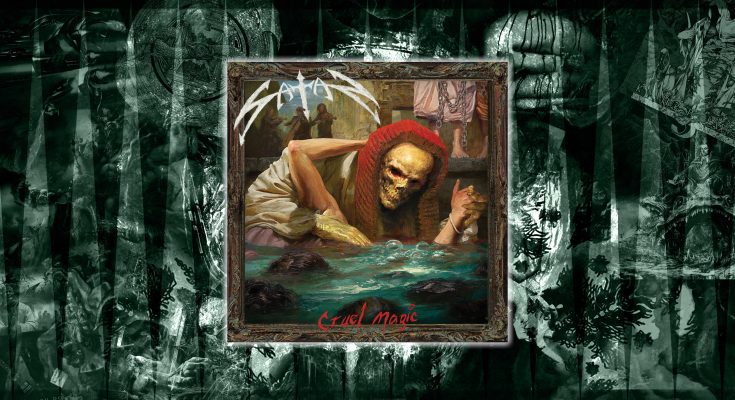 Convention dictates me to say that 2018 was a great year for metal, rock and music in general. Yet honesty dictates me to say that I don’t really know. Haunted by professional and social obligations, one person can only listen to so much music. My heart panics at the thought of all the excellent records that I have overlooked in the past year. For this I continue to believe in the value of year-end lists. Individually, they are the usual testament to personal bias and myopia. But collectively, they are an invaluable tool on the road to discovery. Every year, I discover at least a dozen worthwile bands and releases by looking at lists alone. So after careful consideration, I have selected the following 10 records for your listening pleasure.

In a year that also gave us highly enjoyable releases by Stratovarius and Mob Rules, the best “euro-power” record came, confusingly, from the USA. With their fourth full-length, a bunch of Blind Guardian enthusiasts going by the name of Judicator gave us another taste of what they do best: historically informed lyricism woven into a rich tapestry of colorful melody and bouncing rhythm.

Martyrs do not underrate the body, they allow it to be elevated on the cross. In this they are at one with their antagonists.

9. Ironflame – Tales of Splendor and Sorrow

Ironflame is the very definition of prolific. Not only did they produce two albums in two years. They also managed to sneak into my top ten for two consecutive years. That must means something, right? Jack of all trades Andrew D’Cagna makes songwriting look simple. Take some basic heavy/power metal riffs and match them with steady rhythms and catchy vocals. Top off with shredding solos and renaissance aesthetics. Ropes me in every time.

I don’t mind if my skull ends up on a shelf as long as it’s got my name on it.

If we embrace the notion of polyamory, the union of doom, traditional melodicism and modern rock ethics doesn’t seem so strange. With the help of some studio trickery, Khemmis delivered a new collection of sorrowful anthems that were strong enough to sustain the hype.

Darling, the legs aren’t so beautiful, I just know what to do with them.

How to make occult doom sound fresh again? Sometimes the best way to succeed is not to try at all. Heathen Witchcraft is a captivating genre exercise in which backwoods histrionics and understated leadwork make up for slight flaws in delivery and composition.

Although the most acute judges of the witches and even the witches themselves, were convinced of the guilt of witchery, the guilt nevertheless was non-existent. It is thus with all guilt.

Yob’s eight full-length album is a sprawling mess of jangling guitars, overstretched vocals and top-heavy rhythms. But there is a method in the madness. Instrumental balance, skillful interplay and bursts of emotional spontaneity give this record a coherent center where no could be expected. Our raw heart indeed.

The face is the mirror of the mind, and eyes without speaking confess the secrets of the heart.

At this stage of their career, Judas Priest relies on time-tested formulas. Tension-building grooves, smooth legato leadwork, crushing power chords, theatrical vocals, flashy solos . . . you’ve heard it before. But we cannot help to worship it all. May future generations look back on us with envy. Those where days when gods still walked among mortal men.

The spread of civilisation may be likened to a fire; first, a feeble spark, next a flickering flame, then a mighty blaze, ever increasing in speed and power.

From the heart of America’s rust belt come Huntsmen. Showing their love for Black Sabbath and all things Americana, this quartet released a very promising debut with imaginative songs that walk the line between pastoral folk and angsty blue-collar sludge.

It is a symbol of Irish art. The cracked looking-glass of a servant.

3. Lethean – The Waters of Death

Every year offers its new sensations: bands that come out of nowhere and completely sweep you off your feet. 2017 had Lunar Shadow. 2018 had Lethean. Coincidence or not, both acts can be found on the mighty Cruz del Sur Music label. The Waters of Death is an aesthetic triumph which injects epic doom into a more fleet-footed NWOBHM framework. On top of gorgeous guitar work, we get hauntingly beautiful female vocals. Try resisting that.

We sail within a vast sphere, ever drifting in uncertainty, driven from end to end.

So far in this top 10, you’ve been enjoying things from a safe distance. But now it’s time to move up front and start singing along. Wytch Hazel provides the perfect sound track. Molding the sounds of hard rock giants such as Kiss, Wishbone Ash and Thin Lizzy into an original whole, they play songs to please your body and soothe your soul.

I have found that hollow, which even I had relied on for solid.

More than any of their peers, Satan continue to embody the magic of the NWOBHM. Since they resurfaced in 2013, they have released three peerless album of classic heavy metal. Cruel Magic picks up where Life Sentence and Atom by Atom left off. The guitar combo of Steve Ramsey and Russ Tippins churn out riff after riff that put the competition to shame. Memorable leads and showstopping solos show their intimate familiarity with all traditions of rock guitar. Frontman Brian Ross delivers his vocal lines with an air of unadulterated masculinity, only occasionally interrupted by his trademark hysterical wail. All the while, the rhythm section hits hard, never missing a punch. The instrumental whole is skillfully wrapped up in a production that makes few concessions to popularity. This is musical excellence with no frills, exuding a spirit of craft and invention that every underground band should hope to capture.

Being an old maid is like death by drowning, a really delightful sensation after you cease to struggle.