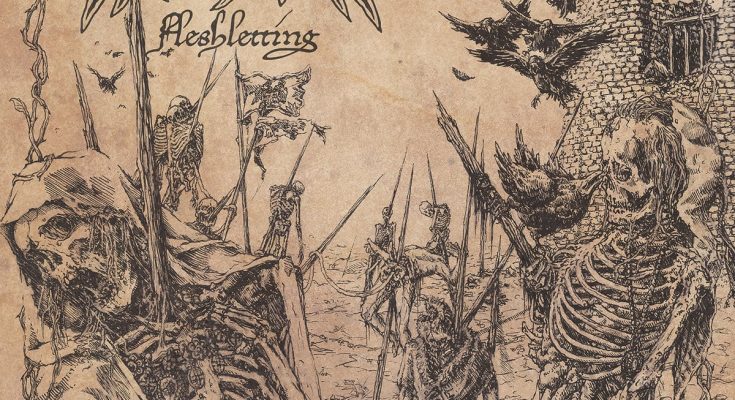 Swedish death metal bands took part in shaping up the traditional style of extreme music. Ever since Entombed, Dismember and Grave played a vital role in materializing the Swedish old school style of death metal. In the mid-nineties Sweden become a hot bed for many bands who have laid down the foundations. On the level of quality and extreme music the Swedish underground metal scene quickly became the most influential scenes in Europe. Not to neglect the Dutch and the Polish scene, the European death metal bands soon began to adopt the HM-2 pedal and this has made them sound close to the Swedish death metal acts. After the nineties wave of Swedish death metal bands which centered on bands like Unleashed, Cemetary, Carnage, Hypocrisy, Séance and etc…. a newer generation proceeded into further musical evolution and increased the use of the HM-2 pedal. Aside from the mentioned bands, the post millennium acts such as Bloodbath, and Demonical continued to expand into further brutality.

Shortly after the phase of 2010 a newer representation of other old school death metal bands like Entrails, Evocation, Lik , including Bloodbath came out with ideal techniques and evolutions. Presently there have been plenty of bands that still seem to be influenced by Entombed. The Swedish death metal band Feral for example combined variety of style from Death’n’Roll and mixed them with old school style. The progress never ceased to exist, the up growth of the recent evolution from the Swedish death metal scene lands us to a young establishment outfit known as Wretched Fate.

From Orsa, Dalarna Sweden a group of youngsters decided to design out their musical craft. Generally by melding together the Swedish death metal style of aggressive HM-2 and the American death metal. And by debuting their first studio album Fleshletting, the album expounds the onslaught of brutal death metal. The visceral sound of the debut is a classic medley of various styles from bands like Bloodbath and U.S. death metal style. Fleshletting includes 12 beastly death metal tracks, powered by boss heavy metal distortion. The aggressive overtures of the chainsaw riffs are explicitly embodied on the first track Wretched Fate. The unique thing about this quartet death metal act is the articulate vocals which are close to Mikael Akerfeldt’s growls. Vocalist Adrian Selmani maintains the nuances of his growls.

The guitar riffs on the album are gloomy and heavy as fuck, tracks like Altars of Misery and Fear Expulsiona carry a peculiar mélange of technicality. The band also includes three members from the Swedish melodic death metal act Non Divine Sun. Wretched Fate sums up all the evolutionary elements of the Swedish death metal bands like Bloodbath and pairs them all into a brutal slab of death metal. This isn’t quite a traditional style which can be affiliated to bands like Entombed or Dismember. As I said Wretched Fate is overly influenced by the post millennium wave of the Swedish death metal bands.

The most sophisticated element here is the guitar riffs, like on Taker of Souls and Writhe. The guitars on these two tracks are heavily laden with an aggressive tone, and blast beats are pounding brutally when required. The band cleverly use some gloomy orchestral samples within the tracks. Most of the tracks are configured to mid pacing, for faster tracks I suggest you to listen to Hived Mind. This track includes some excruciating solos and killer guitar segments. The power of guitar distortions provides the crude tonality, and as mentioned the orchestral sample are brilliantly contrasting with the brutal tone of the guitars.

It’s out of ordinary to encounter a death metal act that understands how to utilize their ideas. The music is generally raw, brutal and carried by baleful riffs and barbaric growls. Wretched Fate builds more to versatile approach on the 10th track Heading for Beheading which is a brutally stimulated by shredding riffs and killer guitar licks. For more melodic tones and haunting sound the eleventh track Epitaph uncovers the darker side of the band.

Wretched Fate possesses a valid professionalism from the chorales, and the wicked guitar riffs which provide the gloomy drapes as a background. This is a massive debut album that clocks at 57 minutes of death metal fury. The closing track Split Tongue Illumination creates a gloomy atmosphere and that’s where creativity lays. I highly recommend this album for fans of Bloodbath, Feral and Baest, Fleshletting is an essential death metal album of the year 2019.
Buy this!!!