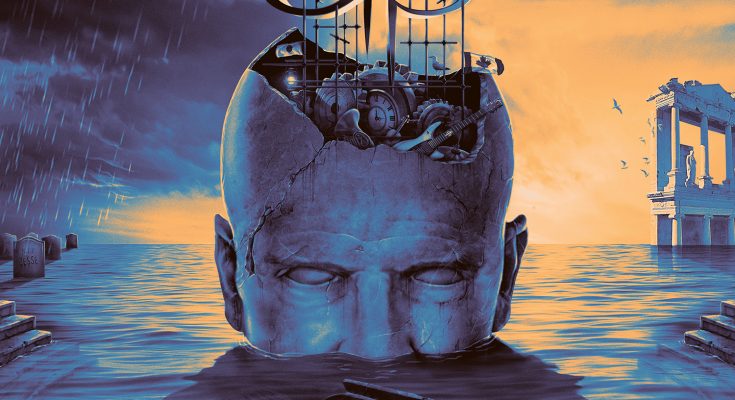 Our Canadian crazy genius mastermind Devin Townsend can be seen as the mad scientist of the progressive metal scene, not only for his incredible funny shows but also for the variation in the songs he brings, he doesn’t care what others think of him, he just does what he wants to do.  On september 22nd, 2017 he recorded a “best of” set and the celebration of the 20th anniversary of Ocean Machine at the ancient roman theatre in PlovDiv, Bulgaria supported by the Orchestra of Plovdiv State Opera.

So first up, there’s the best of of Devin Townsend Project which can be seen as a snapshot of what he has accomplished with that band. After this gig he put the DTP Project to rest, to focus on the next phase of his life and creative process. That’s who Devin is, besides being a gifted musician/creator/mad scientist he is also a emotional dude, he has to have a good feeling about what he does. For that I love him so much, maybe because I can see myself in him. The “best of” was not chosen by him or the management but he let his fans choose which songs to play, although the selection they could choose of was already brought back to a fine selection. These selection showcases what he has brought in the past years. From Transcendence, Infinity to Synchrestra and Ziltoid the Omniscnient, they get all the attention they deserves. All of the songs sounds almost as the counterparts on the disc, due to the fact that Devin already uses a lot of orchestral elements on his songs, of course to see and hear the songs by a real orchestra is a once in a lifetime experience. Fine examples are Higher, By Your Command to name a few. Here and there we can hear some extras as additional woodwinds in Gaia , where Bad Devil reaches maximum madness with some horns added to the song.

The playing of Ocean Machine in its entirety is a bit less symphonic cosmetic handled, but the power and sentimental it brings is outstanding. Devin even brings back the original bassist John ‘Squid’ Harder, who plays for the whole thing, another aspect of the human Devin is, a very noble and humble creature. And of course not to forget the evening is coloured with his charming and funny anecdotes between and during the songs, something Devin made a trademark of.

As for the Blu Ray, the concert is shot and edited very well, do not expect too much fireworks or visually stunning stuff. Devin does this for the music and that’s where the focus is on. Nevertheless some camera angles are very interesting which gives a good impression what you have missed if you weren’t there.This DVD is a must have for all Devin Townsend fans and a fine (temporary ??) closure of the Devin Townsend Project.