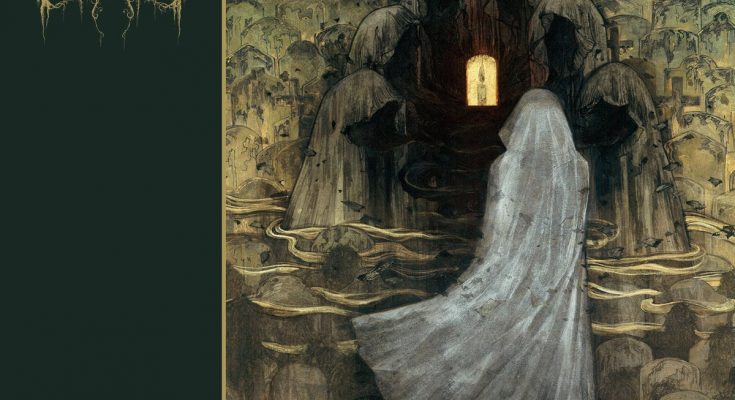 The genre of funeral doom has a special place in Finland’s musical history since many of its pioneers stem from the Land of the Thousand Lakes.
Some have all but disappeared into the annals of obscurity: illustrious names such as Thergothon or Unholy, hallowed nowadays only in hushed tongues by a select few zealous initiates.

Others are still going strong like the mighty Skepticism. Anyone who got the chance to witness them on this year’s edition of Darken The Moon will stand testament to that.

The turn of the century ignited a modest resurgence of the genre with new additions to the Finnish pantheon like Tyranny or My Shameful, but none of them seemed to come close reaching the zenith of its forebears.
The only one truly approaching the event horizon of Finnish funeral doom would be Tampere’s Profetus.

Even their very first cassette demo ‘Saturnine’ stood out amongst its peers, quickly followed up by the debut ‘Coronation of the Black Sun’. Both of these have been rereleased meanwhile, in a stunning gatefold LP that you should allow yourself the pleasure of seeking out.

The sophomore ‘To Open the Passages in Dusk’ was where the band really came into its own. It distilled their essence even further to its purest form. Inspired primarily by Skepticism, the album constituted a minimalistic undertaking carried by the sparsest of riffs and an ever present funeral organ.

‘As All Seasons Die’ perfected that setup in a work about the never-ending cycle of life and death as told through the four seasons.
It took 5 years for Anssi Mäkinen and his fellow pallbearers to write the follow up that little masterpiece.

‘The Sadness of Time Passing’-what a beautiful title that is-explores the concept of time and mortality. Nothing lasts forever, all is but fleeting. Something which some people might find an ironic thing to say about songs that generally last more than a quarter of an hour.

The intriguing cover painting is made by Yuka Yoshihara, who has created an amalgam of a romantic nineteenth century painting and traditional Japanese art.

The opening, titular track is a synthesis of funeral doom, staying true to their bare boned minimalist modus operandi.
‘Nostalgia’ is an even more solemn piece marching to its grave under pounding percussion and a droning organ.
‘Momentary Burial’ finds itself at the center and is by funeral standards a relatively short composition, stylistically a condensation of the first one.

‘Northern Crown’ starts with a spoken piece of mournful poetry over almost sacral sounding church pipes. Then out of the aether itself an eerie, angelic voice floats in that announces the arrival of more pristine burial music.

‘Tiarnia’ lays this pondering over time and death to rest with a mantra like eulogy that resonates further on as an echo, ageless, long after even the sound itself has long died out.