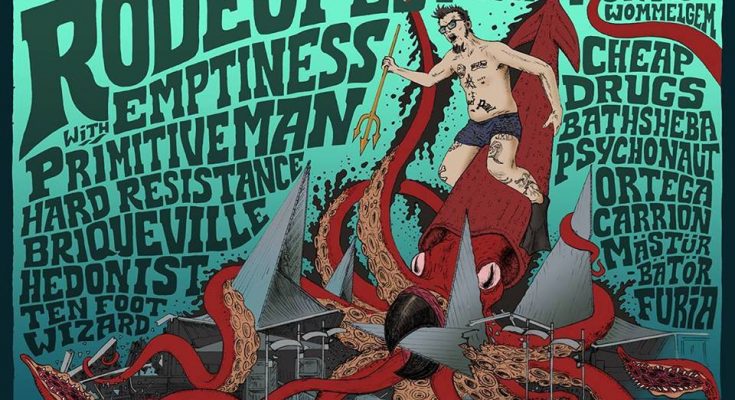 For June 24th, the “home of the Belgian underground” moved from Antwerp Music City to Fort 2 in Wommelgem. Hundreds of alternative people gathered for the 8th summer edition of Rodeofest!

Furia opened up the festival in the venue JH Wommel and played an amazing set even though it was only their second show ever! You could call their music a mix of thrash, death, black,… It’s not easy to give them a label, so let’s just go by the way the band describes themselves: “No postures, no bullshit, pure power!”. Vocalist Sergeï (Leng Tch’e, Deepshow) forms a supergroup with members from bands like Mästürbätör (who also performed a great show on the same stage that day), Bark and Diablo Blvd. This spontaneous, innovative band played without doubt the most surprising show of the day. They play their next show at Antwerp Metal Fest on Sunday and I would recommend everyone to check them out!

Carrion played right after on the mainstage. This technical death metal band from Ghent started off big. They won the Wacken Battle of 2016 and played at Wacken already! This summer they’re also playing at the Metaldays festival in Slovenia. They all master their instruments incredibly well and are getting pretty popular across Europe. It was a great opportunity to check them out on a stage this small. They still have a few upcoming shows in Belgium, so give these guys some credit and go check them out!

Psychonaut had some technical problems during the show. But this didn’t stand in their way to give an intense, psychedelic show. With only three musicians, they create an immense sludge/stoner sound with beautiful melodies that remind of Steak Number Eight sometimes.

Hedonist is a “hard rockin’, hard groovin'” power trio from Genk. You could say they play stoner, doom or sludge with a nice 70’s Black Sabbath vibe, but surely alternated with good speed! It was obvious that the band had loads of fun on stage, which made the audience also very enthusiastic.

Ten Foot Wizard -“a juggernaut of power blues stoner rock, milked from the beard of Zeus!”- is all about spandex and getting smashed. They mix up a big variety of genres like funk and stoner, which made me headbang, jump and dance at the same time. They played the show with a healthy dose of humor (and bananas), without losing the ability to still master their instruments like pros.

With their mystique, intense and dark postrock/metal, B R I Q U E V I L L E gave one of the most intriguing shows of the festival. All of the bandmembers wear masks and long robes on stage and the lightshow was also a sensation to the eye. So even though the show was amazing to watch, I enjoyed the music the most laying down and watching the clouds and the dusk.

Emptiness was the only band with their own scenery.  This combined with an amazing light- and slideshow made their concert breathtaking. With their “melancholic experimental heroic black metal”, they filled the whole field with a dark atmosphere no one in the audience will forget.

Throughout the day, photographer René Verschelde took pictures of the gigs and the audience. For some more impressions of Rodeofest besides the one we showed here already, click here, here and here!

Rodeofest is a perfect festival if you want to be introduced to the Antwerp underground scene, and also if you’re already part of it! For a fair price you’ll get a handful of worthy, passionate bands and a cozy atmosphere throughout the whole day. Support your locals! 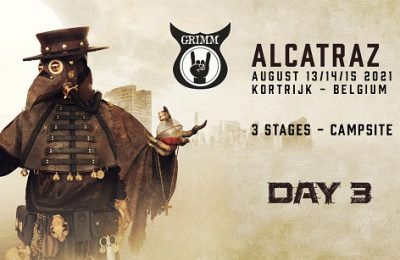