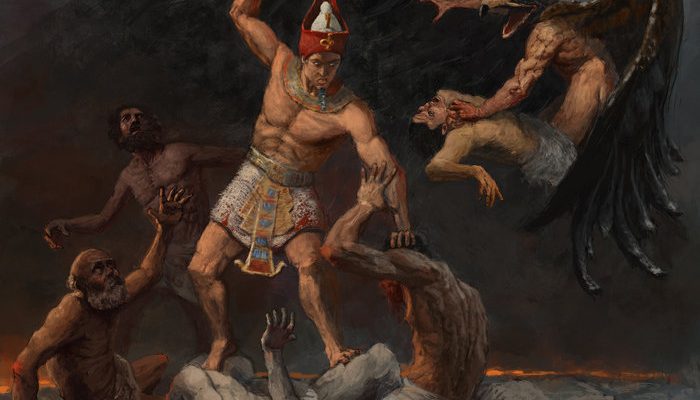 Rising like a burning phoenix from the ancient realm of Pharos, gods, and goddesses, Listenable Records presents the new epic full-length album ‘Carving the Fires of Akhet‘ of the Egyptian blackened death metal band Crescent now based in Germany. In their third chapter and most accomplished work since their formation, the band takes a profound approach to the style which they have been maintaining over the past years. Without being affected by their lineup changes, the lofty songwriting and prowess has grown with an eminent sound. Even though there are many bands that have found a muse in Egyptian-themed death metal, Crescent aptly sculpts its own tradition etching its name on the pantheon of the underworld gods. Fronted by the founding member Ismaeel Attallah (vocals, lead guitars) and Youssef Saleh (rhythm guitars, backing vocals), the third endeavor also marks the sudden departure of founding member Amr Mokhtar (drums). Hence, it provided an opportunity for new blood that came with the new members bassist Stefan Dietz (Nocte Obducta, ex-Melechesh) and drummer Julian Dietrich.

The first listen to ‘Carving the Fires of Akhet‘ already unveils their excellent musicianship. The prime aspect that should be taken to consideration is the sonic quality which seems to be elaborately modified by artistic grandeur. The album opener ‘The Fires of Akhet‘ can be described as one the most epic songs the band has ever written. The musical quality of the rich instrumentation as well as the majestic choral is quite lavish and bombastic. In every fraction of this splendid album Crescent unleashes a wide spectrum of brutality. While intricately fusing the elements of melodic blackened death metal, the obscure display of monumental riffs and the crushing drums are built on a firm foundation.

The guitars wield an extreme and powerful charge of riffs on ‘Moot Set Waas‘ whereas the drums ignite colossal tides of blast beats. There is often an excellent contrast between the excessive brutality and the boisterous tremolos that surge with an inexplicable force. The quartet exhibits its ability with a range of diversity and innovation. Considering how one-dimensional and claustrophobic the previous album was, the first half of the newest album has kept me on the edge of my seat due to the outstanding dynamics. The enthralling moments come from the vivid rhythm guitars which somehow give a distinctive texture to the songs.

‘Serpent of Avaris‘ abruptly switches to pure vehemence exuding utter aggression and brutality in your face! Crescent on their third album showcases monumental riffs, booming bass guitar and perfectly layered tremelos. The bursting blast beats are transformed into a hellish pandemonium. Each song paves the way for the next brutal entry. The roaring guttural vocals resemble a mighty beast on ‘Neb-Pehti-Ra‘ which begins with an overwhelming eruption of blazing guitars. Though the brutal energy here is on par with bands such as Nile and Behemoth, Crescent manifests high stakes of untamed savagery. As a result of this drastic modification in sound and style, the lead guitars show prospects of refinement.

The vocal textures are accompanied by a massive onslaught of grooves. Among these captivating riffs ‘Carving the Fires of Akhet‘ navigates through elongated lengths while exploring dark, hidden revelations. ‘Imprecations upon Thy Flame‘ is constructed on the accessible dynamics of death metal brutality. Albeit modern and blackened in style, Crescent reveals a new modus operandi that was never exposed in the previous albums. Throughout the duration of forty-eight minutes, the drum performance remains at a prominent and complex level. However, the tempo changes often provide awe-inspiring Middle Eastern melodies.

‘Drowned in Theban Blood‘ is noteworthy for the transition of the guitars. Everything from the cannonades of the pounding drums is attained by a groundbreaking performance. A seething escalation of melodies swirls around like divine vultures dancing over the golden pyramids. One could hear a genuine transformation that holds a powerful virtue in this spectacle of mighty Pharaonic-themed melodies. The guitars enter with a foray into the blood-shedding massacre, whereas the ambient interlude “Crimson Descension‘, composed of tabla and synth, slithers deep through the infernal regions of the underworld.

The journey to the unholy, spiritual realms of ancient deities ends with the final track ‘As Nu Enshrines Death‘ which is menacingly dark and slow. With the atonal tremolo leads and fiery eruption of the riffs, the drums provide a static rhythm. ‘Carving The Fires of Akhet‘ is an epic album constructed as a theatrical entrance to dramatic blackened death metal supremacy. The quartet has excelled in setting new musical boundaries where they have risen to a whole new echelon. Therefore, Crescent brings to light the identity of a glorious epoch. This is undeniably one of the best albums of the year, recommended for fans of Nile, Behemoth and Melechesh. 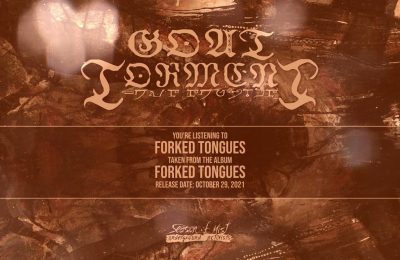 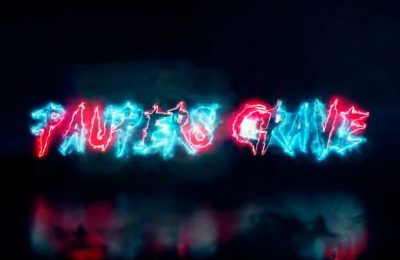