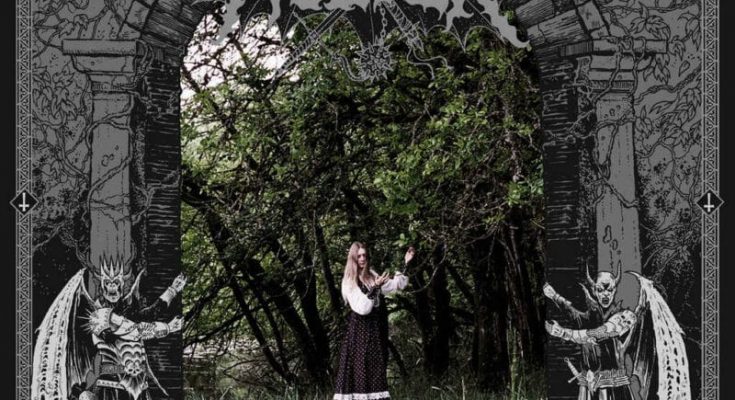 A Hulder is a seductive creature, found in ancient Scandinavian folklore. Said to be exemplary, stunning and seductive, these creatures closely resembling beautiful women are known to wander the far reaches of Scandinavia. They were keepers of mines and caves that were once beset by miners. The Hulder watched over these miners, keeping them safe. But now that mining is mostly automated and folk magik has lost its magic touch, what’s a Hulder to do? That’s right, debut a Black Metal album!

All joking aside, Hulder is one of the best kept secrets in black metal these past years. I certainly didn’t know this lady, who is Flemish but resides in Oregon, or what she brought to the table in terms of musical talent. Anyone who hears this album and delves a little deeper in the origin story of this band, will be wildly confused when they learn all this noise comes from a one-woman-band. And it’s great noise, to boot.

Whereas her former productions were all about having a tape deck-like production, seemingly strange timing and being near-incomprehensible, ‘Godslastering: Hymns of a Forlorn Peasantry’ (that’s a mouthful) is more finished, polished and overall a joy to listen to. Even though joy is not allowed in black metal. The blast beats are crisp, on time and for lack of a better word, blasting. The tempo changes are quick, sudden, but never take you out of the song and really fit well in the overall feel of this album.

I want to talk about the vocals a little more. The vocalist really pulls you in with her tortured screams, growling and rasping her way through the album. Although you might think it would get boring towards the end, it doesn’t. The inflexion, the emotion and just plain damned evil placed in her voice is chilling to the bone. Something about it just makes your skin crawl in the most perfect way.

But enough about the technicalities, let’s get to the album! ‘Godslastering: Hymns of a Forlorn Peasantry’ (yep, still a mouthful) is an eight song, 40 minutes banger of a debut album.

The first two songs, ‘Upon Frigid Winds’ and ‘Creature of Demonic Majesty’ really drive home what this album is about.  The simple, but very technical repetition, with only the slightest difference between some scores, brings us back to the first wave of black metal. Harsh screaming vocals, blast beats and mild tempo changes make it clear that what you’re listening to is not your average wannabe black metal artist. The technique and emotion behind these two first songs betray an understanding of the long-standing traditions in the black metal scene.

‘Sown in Barren Soil’ really ups the tempo, with a non-stop barrage of tremolo picks heading off into the battle, before calmly relaxing at a tranquil lake for just a moment, after which we are thrust in a clash of calm, acoustic notes blended with blast beats and shredding. All the way to the end where it all slows down to…

‘De Dijle’. The next song on this epic saga. Contrary to the other songs, this song is actually written in Flemish. The lyrics sound very strange to me (native Flemish speaker), not because it’s my language, but because at a first listen, it didn’t sound familiar in the least. That’s what gives this its eerie vibe. It has this very strange, synthy undertone, with acoustics in the front which make this song very… hypnotizing.

The next song is less so. ‘Purgations of Bodily Corruptions’ tries to marry swaying rhythms, traditional instruments and an avalanche of percussion and overdriven guitar. It does this very well. However, even if repetition is a staple in the black metal genre, I found my attention drifting at points. It doesn’t really hold the fixation like other songs on this album. Just not my cup of tea.

The title of another song on the album is ‘Lowland Famine’. Another staggering stack of very fast blast beats and killer tempo changes makes this a wild ride. Hulder herself has really put her all in this one. Her voice really brings that oh so very juicy kind of dark that you find at the bottom of a well that’s said to be cursed.

There are a few more songs to be heard in this album, but I’d rather not spoil the surprise. Go find Hulder on Bandcamp, Youtube, Facebook or maybe look in the darkest part of the forest. Something is bound to pop up if you wander deep enough with this album blaring throughs your headphones.

In short, this album is a lot of things. It’s black metal, clearly, but it’s more than that. It’s a personal journey  put into song (or scream, if you prefer). It can not be overstated how much work has been put into this, especially if you reconsider all of that was done by just one woman. It is a well-put together album, not without its flaws, but surely a grand debut! Well done Hulder, on to the next one!