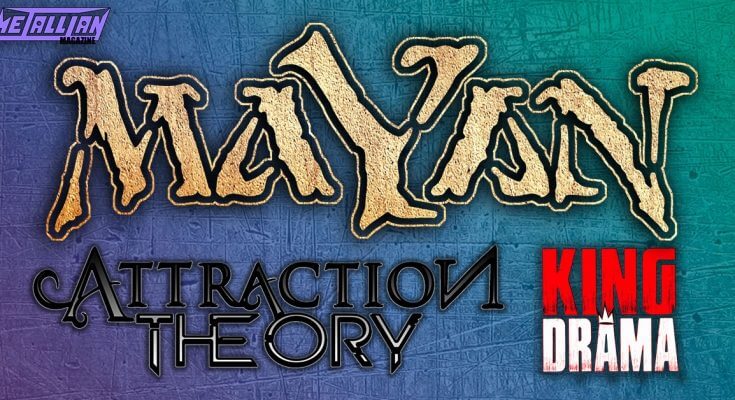 It has been since September 2018 Mayan came to play in Belgium. Their faithful friends would not have forgotten them, but for all the other people they were here to prove what they are worth. They would bring a great night with support from King Drama and Attraction Theory.

There weren’t a lot of people in the venue when King Drama opened the night. Almost half of the people in the audience were photographers. It was the first time King Drama played with these four musicians. Their bass player couldn’t make it because he was in hospital. They certainly achieved to create good music, but most of the time it was just a little bit off. Was it the bass that was missing? Was it the male and female voice that didn’t always interact well? Was it the twinning guitars that weren’t always in sync? They made a lot of fun on stage and they obviously enjoyed making music, but there is still a lot to work on.

Attraction Theory showed to be a more professional band. They had an intro track to start with a great entrance. When they came on stage with sunglasses it was like they did this every day. They created a rich sound which the center part of the crowd totally approved. The crowd became bigger and they all enjoyed the well-balanced music of Attraction Theory. Sometimes there was a lot of backing track, but this is common for modern bands. There was even a small singing lesson so we could all sing along. At the end of their set the venue was almost filled and the people in the crowd were singing along.

We had to wait a little bit until they started, but when their intro began it was immediately clear Mayan was going to smash it. They were with a lot of musicians on that little stage. And when you think the stage is full, there came an extra singer on stage. It was one orchestrated chaos of instruments and voices, but it all sounded so good. After a few songs it all calmed down and the two girls, Laura Macri (vocals) and Merel Bechtold (guitar), stayed on stage. It was time for a ballad that gave us goes goosebumps.

Before we knew it, it was all energy and power again. With even a song dedicated to Mayan’s merch god. The next small break is after Ariën van Weesenbeek (Ari the Beast) his epic drum solo. When everybody had left the stage Mark Jansen (vocals) came back on stage to MC the remounting of the other band members. They play two more incredible songs (Human Sacrifice & Bite the Bullet) and the show has ended. After the show all the band members came down to talk and have a drink with their fans.