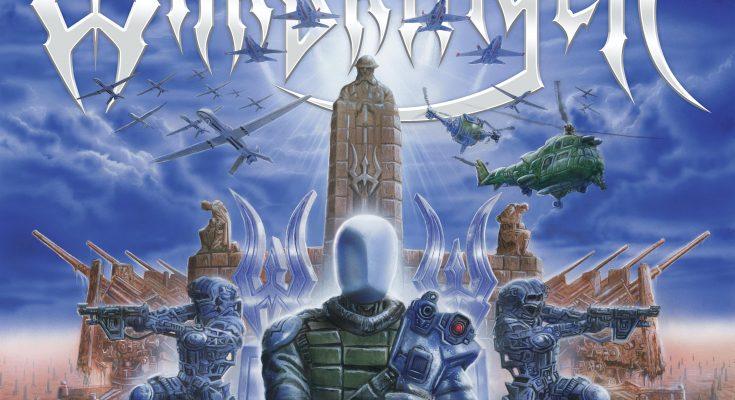 With all the shit that’s been going on in the world lately, it’s comforting to know I can still count on thrash metal bands to release awesome, new content, allowing me to channel all of my pent-up rage and frustrations. The veterans from Testament recently released their thirteenth studio album ‘Titans of Creation’ and Havok just dropped ‘V’ unto the world. In between, we have modern thrash titans Warbringer from California bringing back their distinct style of belligerent metal with the release of their sixth studio effort, ‘Weapons of Tomorrow’.

Warbringer formed back in 2004 and have since gone through multiple line-up changes, with vocalist John Kevill remaining as the sole constant member. The current line-up consists of drummer Carlos Cruz, bass player Chase Bryant and guitarists Adam Carroll and Chase Becker. With the exception of Bryant, this is the same line-up as on the excellent ‘Woe to the Vanquished’, which was released three years ago. I suspect this is why ‘Weapons of Tomorrow’ feels like such a natural and consistently strong continuation of their previous album.

‘Weapons of Tomorrow’ contains 10 tracks, alternating between shorter more straightforward thrash fare and longer more experimental tracks. This shift towards more ambitious and complex songwriting is a bit of a departure from previous albums. Sure, ‘Woe to the Vanquished’ concluded with the epic ‘When the Guns Fell Silent’ (clocking in at 11 minutes and 11 seconds!) but in general their songs usually last between 3 and 5 minutes. ‘Weapons of Tomorrow’, however, contains 4 tracks that last between 5 and 7 minutes.

Longer tracks like ‘Defiance of Fate’ and ‘Heart of Darkness’ are slower paced and contain more melodic parts. Do not mistake them for ballads though. They contain way too much ominous dread and heaviness to qualify as such. They do provide some welcome variation and breathing room after hard-hitters like ‘Firepower Kills’ and ‘Unraveling’, which move at an aggressively frenetic pace. Other tracks like ‘The Black Hand Reaches Out’ and ‘Power Unsurpassed’ are more anthem like and will most likely be part of their upcoming live shows (once those return).

Lyrically, Warbringer don’t stray from their usual subject matter of conflict and warfare. If you’re a bit of a history buff, then there’s plenty to uncover here as Kevill takes inspiration from mankind’s less-than-stellar history. ‘The Black Hand Reaches Out’ for example is about the organisation which planned the assassination of Archduke Franz Ferdinand of Austria. ‘Heart of Darkness’ takes inspiration from Joseph Conrad’s novella of the same name, which was also one of the main sources of inspiration for Francis Ford Coppola‘s war film ‘Apocalypse Now’.

The title ‘Weapons of Tomorrow’ refers to the overarching theme of technological evolution of warfare through science and the human suffering it begets. Unlike “party thrash” bands such as Municipal Waste or Insanity Alert, Warbringer have always been dead serious. You won’t find any levity on this album. Only grim storytelling. This is most noticeable on the aptly titled closing track ‘Glorious End’, which might be my favorite track on the album. It depicts a conversation between a father and his son, who eagerly goes to war seeking glory, only to discover there is none to be found. To me this song perfectly encapsulates Warbringer‘s ability to combine epic songwriting with poignant storytelling.

Honestly, the only thing I’m missing on this album is an instrumental track. Something similar to ‘Nightmare Anatomy’ or ‘Behind the Veils of Night’ from their previous albums. This is a minor nitpick, however, and Warbringer makes up for this with the melodic parts from ‘Defiance of Fate’ and ‘Notre Dame (King of Fools)’.