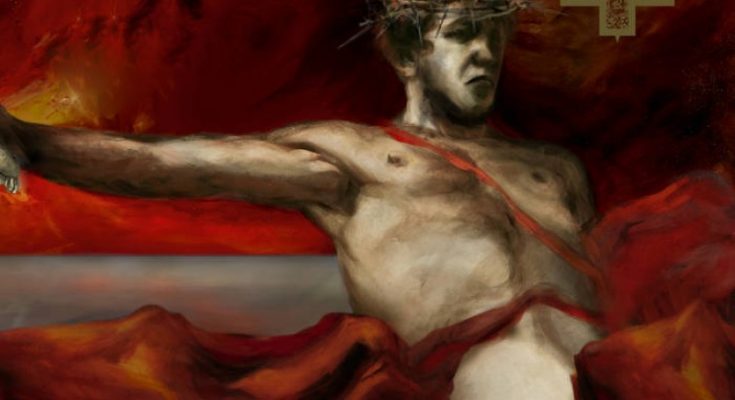 In early 1993 the Austrian black metal trio Abigor embarked on a musical journey where they would achieved high status in the European underground scene. With such a glorious history, those who are familiar with the black metal institution that is Abigor are surely cognizant of classic masterpieces such as ‘Verwüstung / Invoke the Dark Age‘ and ‘Nachthymnen (From the Twilight Kingdom)’. In the field of black metal, Abigor was among the first to introduce neo-classical elements into raw black metal. Now years after the golden age of the second wave, there is much more to uncover on their latest album ‘Totschläger (A Saint Slayer’s Songbook)’, which was released by World Terror Committee on December 8 2020. Their twelfth-studio album once again brings the classic line-up to the fold, comprised of Silenius (vocals), P.K. (guitars, bass) and T.T. (guitars, drums, and bass).

Abigor’s ‘Totschläger (A Saint Slayer’s Songbook)’ is perfectly sown into bombastic symphonies of nineties black metal, which gives the songs a majestic touch. This isn’t an iteration of what the band has presented before. In fact, they showcase a lavish technicality and imposing riffs that displays many tempos and shifts. Yet there are moments when the band channels the landmarks of classic albums such as ‘Orkblut‘ and ‘Opus IV‘ and drifts in the line between these two albums in a more diversified way. The orchestral compositions are frequently used in many tracks and they’re beautifully phrased. The songs are formed on semi-symphonic textures, but they also present some elements from later albums such as ‘Leytmotif Luzifer (The 7 Temptations of Man)’.

The opening piano notes of ‘Gomorrah Rising – Nightside Rebellion‘ proves that Abigor is on the pinnacle of its evolution. The sophisticated level of their masterful performance wields power as the band unravels intricate musical abilities. Its labyrinthine song structure and multi-dimensional nature of riffs sound potent and technical. ‘Silent Towers, Screaming Tombs‘ is an example of these complex compositions, which are here combined with flute and string arrangements. Silenius’ vocals have changed a lot from the older days. Another particularity regarding the album comes in the form of its technical riffing and the use of tremolo pickings.

The grand classical intro on ‘Orkblut (Sieg oder Tod)’ gives us a glimpse of their modern avant-garde style of black metal. ‘Totschläger (A Saint Slayer’s Songbook)’ is a bizarre manifesto assembled by frantic riffs and a pompous orchestration that becomes fully symphonic in scope. The dense and layered sound of the abrasive riffs on ‘The Saint of Murder‘ creates a thick wall of sound. There is a balance between the rhythm, the lead guitar and the solos. While the lush orchestration provides a bombastic backdrop, the drums fully excel at executing blast beats.

‘Scarlet Suite for the Devil‘ bears some comparison to ‘Nachthymnen (From the Twilight Kingdom)’. These orchestral structures are exquisitely reminiscent of what Abigor presented in the past, yet elaborately arranged and modified. P.K. and T.T. show high efficiency in handling the instrumentation. ‘La Plus Longue Nuit Du Diable – Guiding the Nameless‘ is noteworthy for the melodies that are beautifully inserted into the song. With the howling vocals and chorals providing a majestic feel, the drums are fully executed at hyper speed. Abigor captures the antique atmosphere of nineties black metal despite the songs having slow monolithic riffing. There are many aspects that are installed from the archaic fashions evoking bygone memories. ‘Tartaros Tides‘ even offers some nostalgic riffing from the band’s debut album ‘Verwüstung / Invoke the Dark Age‘. The track is full of tremolo pickings and blast beats. The grandiosity of the choral is paired with a majestic orchestration.

The outbursts of the technical riffing and the tyrannizing power of the drums on ‘Flood of Wrath‘ shows how the band can shift from old school to modern black metal. ‘Totschläger (A Saint Slayer’s Songbook)’ conveys unsettling aggression, chaos, dissonance and melodies that make the songs sound coherent and in your face! The final track ‘Terrorkommando Eligos‘ is a striking entry that begins with a fast-paced tempo structured on orchestral samples. ‘Totschläger (A Saint Slayer’s Songbook)’ is a testimony to the band’s craftsmanship and skills, proving again that Abigor’s music has always been about originality and innovation. This is an incredible piece of work, highly recommended for fans of Emperor, Deathspell Omega and Dødheimsgard.

One thought on “Abigor – Totschläger (A Saint Slayer’s Songbook)”