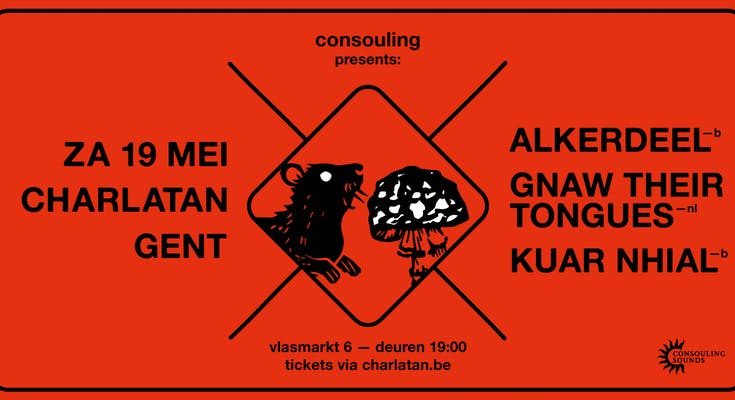 On certain occasions the lights in the Charlatan go dark and the amps are turned up. The past couple of years the Charlatan has been host to a multitude of fantastic concerts in the heavier spectrum of music. From Onmens to Esben And The Witch to Monolord, all excellent shows. The bar was set high for Kuar Nhial, Gnaw their tongues and Alkerdeel but the Charlatan’s charm might give them that extra push to make it a fantastic night nonetheless. Tonight Consouling Sounds treated us to something else than sweets.

Kuar Nhial (***) had the daunting task to start off the night. Even more so since this was their first concert as a band together. Despite all that a nice crowd had gathered to see and hear them for the first time. To start out with the evident, there were some weak points to their set. The transition between certain parts wasn’t that smooth and the consistency and coherence as a band was sometimes lost for a second or two. I say weak points but they were very minor, especially if you keep in mind that this was their first show. Seldom have I seen such a good first time performance. What they lacked in experience as a band they made up with a very interesting and appealing sound. From atmospheric riffs to sludgey doom to orthodox black. Sure, other bands have combined these genres before but this was a completely new recipe. If anything they sounded promising and refreshing, give them some more stage time and you’ll have yourself a very strong act.

Authentically disturbing. I guess that’s how you could define what just happened. The Dutch composer Maurice de Jong manages to capture the essence of the most twisted mind into his music, if you can call it that. Gnaw Their Tongues (***1/2) draws heavily from black metal when it comes to sound but it’s far from that. The drone drenched sludge makes no compromise and violates every boundary you thought to be sacred. For the live set it’s Maurice on guitar and Grietje in charge of the samples. Together they tear down your very own sanity and construct of reality one “note” at a time. Although their set in the Charlatan wasn’t as relentless as it could be it was still something to behold. Gnaw Their Tongues adds depth to their music with multiple levels of insanity and a whole range of deranged samples. Sadly in this live setting these samples were often drowned out by the instruments on the tracks. Even then it was still one hell of a ride straight into existential despair.

Death by heatstroke on the sound of filth and disturbance. That could’ve been me the last time I saw Alkerdeel (****) live. Kinky Star, Gentse Feesten 2016, 3am, it was a hot day and an even hotter night. With a crowd, double the capacity of the venue, it felt like hell, the temperature easily reached 40 to 50 degrees Celsius that night. With an infernal pit that never stopped moving and someone on constant water duty to quench our insatiable thirst. It’s a wonder nothing serious happened that night. I knew that Alkerdeel wouldn’t top this particular show but it was pleasant to see them in more bearable conditions. The lights went off, the strobes turned on and Alkerdeel played another unforgettable set of droney black doom metal. I almost take it for granted Alkerdeel delivers the same quality with every show. With enough variety in their setlist they keep it interesting and before you know it the hour is over and so is another concert of Alkerdeel. Not much to be said here other than that this was as filthy and tight as I expected it to be. I really need to see these guys more often…