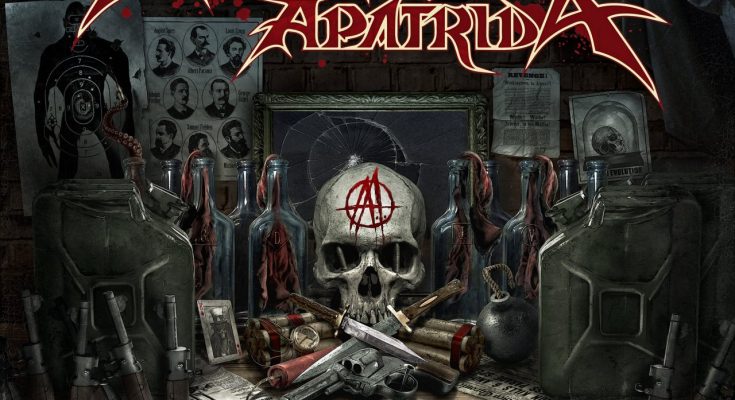 Angelus Apatrida [‘an-je-lus / a-‘pa-tri-da] is a thrash metal band that was formed 21 years ago in Spain. The band’s name is a mixture of Spanish and Latin that can be translated as renegade, fallen or stateless angels. The band is comprised of a close-knit four-man unit which has remained consistent over the past two decades. It features vocalist/guitarist Guillermo Izquierdo, bassist José J. Izquierdo, drummer Victor Valera and guitarist David G. Alvarez. While initially starting as a more traditional heavy metal/power metal-band, these fallen angels quickly transitioned to a more aggressive style of thrash metal, which they’ve been perfecting ever since. Earlier this year they released their eponymous seventh album through Century Media Records.

As the album kicks off with ‘Indoctrinate‘ it immediately sets the tone for the rest of the album. There are no acoustic intro’s or outro’s, no slower melodic parts, nor any ballads to be found here. Just 46 minutes of pure unrelenting thrashing goodness. The harsh vocals are filled with anger as they spew searing criticism. They also reminded me a bit of Chuck Billy from Testament on certain tracks such as ‘Childhood’s End‘. On the instrumental side of things, the shredding from the guitars and the percussive assault from the drums barely leave any room to breathe. There are also some well-placed and ear-piercing guitar solo’s interspersed for good measure.

Unfortunately, the album’s strengths are also part of its weaknesses in a way. While there aren’t any bad tracks present here, they all sound quite similar in tone and tempo, which makes it harder to distinguish them from one another. Even after multiple listens, I wasn’t always able to instantly pinpoint which track I was listening to. With the exception of ‘We Stand Alone‘, most tracks also lack a certain memorability or a catchiness that invites you to chant along.

The album’s cover artwork was created by Gyula Havancsák. I quite like the level of detail that is present in this cornucopia of firearms and explosives. This artist is also responsible for the artwork of bands such as Warkings and Serenity, as well as recent releases from Accept and Annihilator.