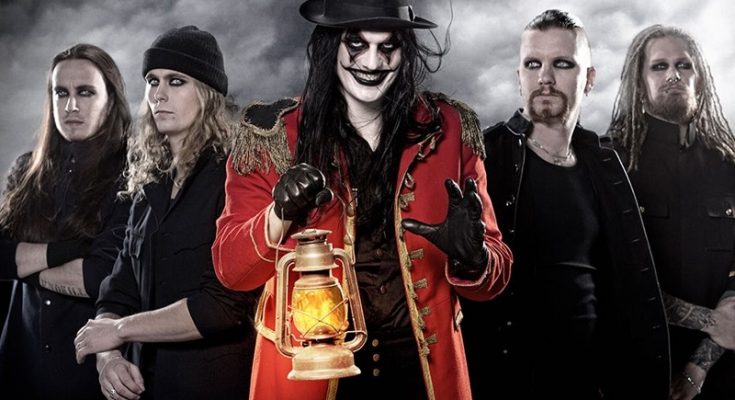 For the first time at Graspop ever: Avatar.
We had the chance to talk to lead singer Johannes Eckerström. Remarkable: we came across a man with a Hawaï like shirt, not what we expected (speaking of a fun twist). Avatar is formed in 2001. The Swedish men have 6 albums, 1 EP and 2 demo’s. Except for a change of guitarist, the members are the originals. They play Melodic death metal with a special touch. 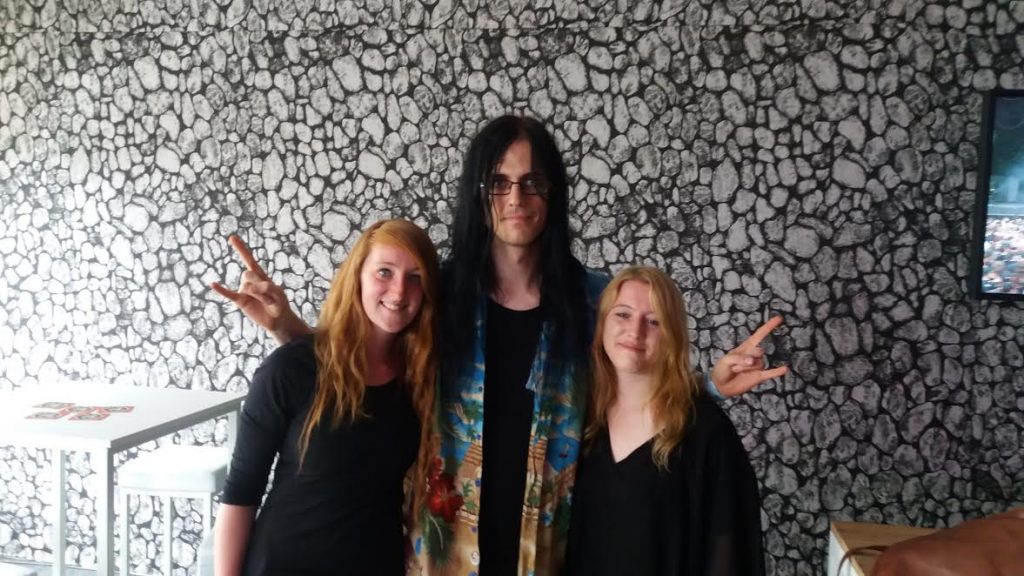 Good afternoon Johannes, how are you?
Good. We did Hellfest yesterday so we flew in very early. There was a delay at the airport, we did almost not make it to the show. But we did and the crew is amazing.

Your first time at Graspop, how are you experiencing it?
Good but again it’s been crazy. We had nothing to eat when we went up the stage you know. It was really fun. When you play this early, it’s hard to know what to expect. It’s hard to count on stage how many people there are. There were more than the fingers I could count on my hand so… It was very cool.

Playing at Graspop, was it something on your wishing list or it just came along?
We have a couple of setlists, depending on how much time we have. We switch it around a lot but it’s not like we have to do something specific at a certain place. We don’t want to change into robots so we want to turn things around. Then it feels more fresh every time. We play the stuff people know and want to surprise them sometimes.

We noticed for today, you’re the opening band and In Flames is closing. Both of you are Swedish.
That’s how we do (laughs). In a few years it will be 2 Swedish bands starting and 2 Swedish bands closing.

Is being a headliner something you want, like In Flames?
Off course. I think we send the right message today. We are not a headliner yet but at least let us play a little bit later.  I’m not complaining because it was amazing today. A memorable show for us. Now I have time to go check other bands like Devin Townsend Project.

Is being in Avatar your main thing or do you have another job?
No, this is my main job. The last few years, it’s been taking more and more. For some of us, we still do other things but I don’t see the problem in that. We are doing things our way. If we want to tour, we tour. It does not go as fast as we want to achieve some things but nowadays we get our money so that’s okay. It’s a slow and gradual change but I’m okay with that. We don’t have to have the so called ‘real jobs’.

You used to play ‘death’ metal and now you are concidered to be a heavy metal band.
Well, I think heavy metal is a good thing. I consider death metal as a part of heavy metal. As death metal fans, I know for sure we are not playing death metal. Cannibal Corpse is death metal. We are big Beatles fans, we are big Halloween fans. We are just trying to find our own little corner in the world to fit in.

You stand out from other bands…
So it seems.

…. with the make-up, the costumes, the high grade of theater.
Yes. No one has ever done that before.

I hope you don’t take this the wrong way but the way you bring your music, for me it reminds me much of Fleshgod Apocalypse.
I appreciate you say that. Because at the end of the day, we sound very different. Cause again there it is, a technical death metal thing but they are all so… I love them so much because they are so doing what I believe we are also doing. The whole idea is try to look like your music sounds. We wear costumes, it feels very historic. They look the way they sound. That is what we try to do as well and they release a type of spaghetti which is fantastic.

On the website of Graspop, we read the little biography. It said that you are a mix of Alice Cooper, Rammstein, System Of A Down…
Yes I remember that press release.

… how do you feel about that?
I think I wrote that in 2012 when the album (sneezes) was coming out in the States. When that was coming out, we needed something. Someone else wrote something and that was crap so I preferred doing it myself. In a way it made sense, a very short version of it. A band explaining another band, you can never really do that. But I had to write something.

Before getting up on stage, do you or all of the member have a little thing? Say something, do something, cheer each other up?
Yes, we gather up in a little circle and a men cries “blood noise fire metal” and then we go. We have done that for a couple of years. Actually, there was a demo band who opened for us for a special show in Gothenburg. They stood in circles and shouted “Slayer, Slayer!” and went on stage. That was very cool. If you are like us, we dress up for the party, that becomes a part of the ritual. Today there was hardly time for it before the show – we even didn’t got time to go to the dressing room. We just changed behind the stage, we used our car window as a mirror.

Does it gets you tired sometimes to wipe of and put on make-up many times in a row?
At the end of a tour, when we’re.. It doesn’t matter if our tour is two months long or two weeks long, the last show is like I’m already walking my dog and buying cereals. It’s something I have to overcome every last show. “Tonight we need everything on stage” is the thought. What I have learnt is, whatever you are doing or no matter how ordinary it looks from the other side, you get used to it or gets normal. It’s still fun and it’s cool but it’s also kind of normal. It happened before and it will happen again.

You are playing in many different countries. Do you notice a difference in the audience?
Yes and no. All and all, we are shaped by our cultures. But then also we are shaped by our sub-culture we choose to join ourselves. That’s the funny thing with metal like, it usually starts when you’re a teenager. At that age, it’s so much about identity and attaching your identity to something else. Like “I am who I am because I listen to this’. But then the thing with metal is metal grows with you I believe. Being a metalhead makes sense, when you are 40, 50 or 60. I have friends who are into hip-hop, I like some hip-hop but now they are just people. But metalheads remain metalheads. So in that opinion, in metal there aren’t any borders. In Southern Europe etc, people are more vocal about things they like. Up North, if we say “that was pretty nice”, it was “fucking awesome” in Italy. You can follow that scale from North to South. In parts of Sweden and Finland, it doesn’t matter if they saw you a hundred times or you are sold out – it’s all about the concert. It’s more like “I am having so much fun” (low voice) while again you go down South it’s like “I’ve never heard of you, I looooove you” (loud voice). But most of all, metalheads are metalheads.

If you would be in the organisation of a festival, which band would you really like to enter the stage?
I would never want to be in the organisation. The people who do that, are the people who get to see the least bands. Again, this is a very cool line-up (refering to GMM). Deep Purple is playing tonight so.. This is some good excitement. Then I would have ABBA re-united off course. Even it’s a metal-pop fest I don’t care.

Which bands do you see as your inspiration to write and play music?
There are so many. What I look at the most when it comes to writing songs, it always falls back to the Beatles and Black Sabbath. There are a thousand other things you know like Judas Priest, Blind Guardian, Crane… I might not even be a fan of something but a tiny thing can be a thing, whatever it is.

Your name Avatar has so many different meanings.
Ours is from Hinduism. Not because of a computer game (laughs). It came from religion class in eighth grade. It’s when God manifests himself on earth, in the shape of a human being or an animal, he is in disguise basically. The idea that there are powerful things inside a human being – like we are avatars you know. The idea of interviewing yourself like that, the potential to be unleashed… That is where it came from. Now suddenly 15 years later it’s many things but we didn’t know that. But now, it’s just our name.

Would you like to tell something to te readers or fill us in about new things?
Yes, I’d like thank them for reading this. To put up with all this shit, thank you very much (laughs).