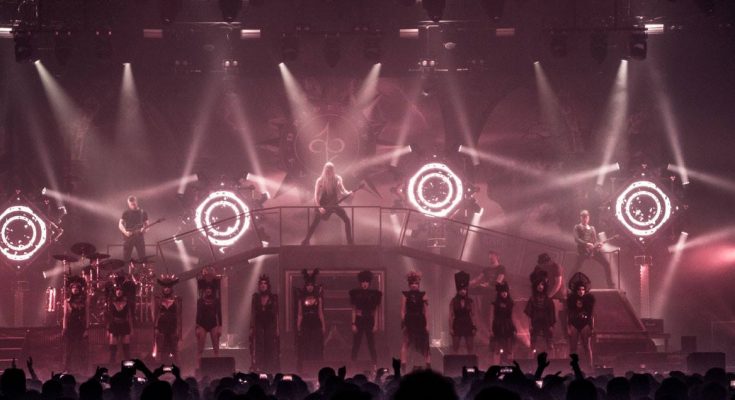 Sunday the 21st of January – Brussels, the capital city of Belgium was invaded by the Brides Of Lucifer. 13 lady’s from Scala, musically supported by Koen Buyse (Zornik), Steven Kolacny (Scala) and Ives Mergaerts. They recently made a site about their group where we can read “13 singers in custom dress creations accompanied by a group of excellent musicians”. At first before the start of the concert there was a spoken intro. A computer animated voice that was hard to understand.

13 singers: at  the beginning of the concert there was a long intro during which the ladies came on stage one by one. This took some time. And when  the 12th lady arrived on stage the concert finally began. During the third song, we started to think number 13 might have been sick. But after a few more songs, she finally came on stage as the “Queen of Brides”. The 12 singing Brides seemed to worship the 13th, not singing, Bride. After the song she disappeared. Then a few songs later she appeared again and again she did not sing. It seemed that she was only there to be worshiped by the 12 singing Scala members. In one of the last songs she came back one last time and sang the last chorus with the 12 others. So instead  of 13 singers, in my opinion there where at most 12+1 singers.

Group of excellent musicians: the musicians are musically better than me… but when Koen played the lead guitar in the first few songs we heard a couple of false notes. Koen is a great showman but in my opinion not used to perform for a real metal audience, too much commercial show elements that didn’t impress the real metalhead… later the other guitar guy played the lead solo’s, which sounded a lot better. Because we stood directly in front of the stage, the guitar (audible through the amplifier) and the drums (directly audible) didn’t sound harmonious.

At the intro and in one of the songs Ive Mergaerts plays the story teller, but sadly enough he didn’t learn his text cause it was too obvious he was miming the words.  The biggest disappointment of the evening might have been the sound in general. The guitars overwhelmed the voices of 12 talented singing ladies. Only the best know classics were recognizable because of the guitars. Such as Painkiller (Judas Priest), Chop Suey! (System of a Down) and Fear of the Dark (Iron Maiden) where the only songs sang with all our voices. There was no interaction with the public so the 12 ladies sang their songs and the band played their music, but the public could only stand and look.

But don’t be misled by the earlier criticism, I still think ‘Scala goes metal’ is a wonderful concept. I wouldn’t call it Gothic metal but a good female voice band. I was afraid the songs would be too soft and dull after a while, but that was not the case. The stage looked simple with just a bridge but it was more than just a bridge. The custom dress creations of the 12 + 1 singers were special, a few hard yelling wasted people from the back thought they were in another club I guess, but in my opinion the creations were exotic and well daring. Just as Lucifer himself would like it. The music of the band  was good and sounded, when I recognized the song, just like the real stuff so my head banged a few times…

I’m looking forward to their first cd release and I think the next gig I will be there again, it was time well spent.