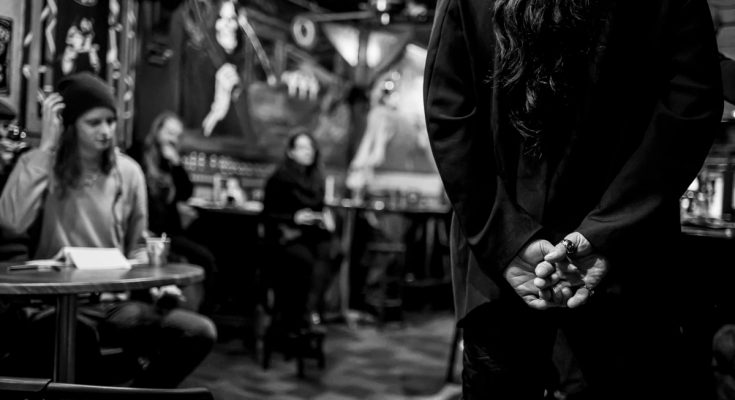 Last October we got wind that Dutch symphonic/horror metal trio Carach Angren hit the studio yet again to work on a new album. Next to no information was made public and there hasn’t been any news since then… apart from the unfortunate exit of drummer Namtar a few weeks ago. I recently got an e-mail from our dear friends at Season of Mist, who most kindly invited me to attend an exclusive listening session of Carach Angren‘s brand new record in Nijmegen’s Rockcafé Backstage. Their new epic bears the imposing name ‘Franckensteina Strataemontanus’, and believe me when I say its title is a perfect fit for the gargantuan composition that it is.

Now, the record will of course be released on Season of Mist and will hit the shelves on May 29. You’ll just have to be patient for a few months still. In the meantime let me see if I can pique your interest by telling you exactly what I thought of ‘Franckensteina Strataemontanus‘.

Before describing how the listening session went, let me start off by saying I like Carach Angren‘s music quite a lot. It always gives me the sense I’m watching a musical of some kind, ‘Phantom of the Opera‘-style. It’s got that dramatic and Gothic factor to it, yet not just in a musical sense, but also very much in storytelling and appearance. For example, I love spinning either one of their records whenever I’m in my Poe or Lovecraft moods. If you’ve had the luck of catching one of their live performances, you must know what I mean. It’s even more apparent then.

Now, these elements return on ‘Franckensteina Strataemontanus’. If you’ve listened to previous Carach Angren records, you are aware that Ardek is a master composer. He is the brains behind the orchestral layers of the music and his prowess is once again apparent on this record. He’s always been a genius, but the new album takes it even further. Every song is composed in a way that the stories unfold before your very eyes. It’s as if your surroundings suddenly shift, so that you yourself become a character in the tales. Once they hit play, the story came alive (pun intended). It’s quite theatrical, really.

I took a look around the bar in which we sat and exchanged a few impressed glances with the other reporters, who confirmed what I was thinking: this record is catchy as hell. Some tracks are still lingering in the back of my mind as I’m writing this, one week after the session. And I clearly remember singing along to a chorus or two after only one passage. And the way the songs flow into each other, not only thematically, I feel is even more coherent than on previous records, some of which were concept albums too.

Now, this is again a concept album which, at first glace, you’d expect to revolve around Mary Shelley’s Frankenstein story. While you wouldn’t be entirely wrong, you wouldn’t be quite right either. Upon delving deeper, you’ll realize it actually tells a fictional story containing very factual elements about the life of a Johann Conrad Dippel, who was born at Castle Frankenstein (which exists and which you can visit, by the way), on which Shelley’s Gothic novel is based. He is mainly known as seventeenth century mad alchemist and anatomist who, according to some sources, experimented on animals and cadavers. “Franckensteina-Strataemontanus” is actually an addendum to Dippel’s name.