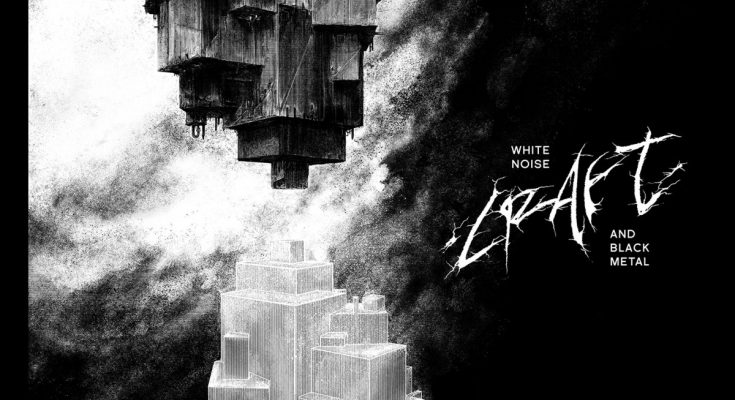 Sweden’s cult black metal band Craft has instilled their style with the acts of Darkthrone, preferring to explore deeper into heavy territories and uncanny atmosphere. Their earlier albums such as Fuck the Universe and Terror Propaganda were affiliated with the black metal school, and with a highly skilled profession. The Swedish quartet now returns with modern material that seems foolish to be overlooked. There are certain bands which somehow have diverted their musical direction from the other traditional black metal bands and formed their own sonic sphere, and become true to their style without having a parallel counterpart. It is apparent that Craft, Mysticum and Darkspace are the best examples of this primary form.

White Noise and Black Metal is clearly an unusual title for an album, but the record is a step towards evolution at least for a band like Craft. But nevertheless, its sonic contents are extremely dark and charged with robust frequencies from an alien world. The songs are based on various riffs of a morbid kind, infiltrated with bleak tremolo riffs. While the musicianship is of a quality level, the vocals are grim, cold and evil. On this fifth studio album the band has arranged several monumental riffs that are presented in a complex spectrum. The sharp guitar tones have a wide variety of rhythmic sections which are handled by Joakim Karlsson. The eerie sounds of ambience intermingle perfectly with the odious vocals of Nox. The cosmic Spheres Falls is a great opening track accompanied by rhythmic drumming that shows a crystalline coherency.

With many artful slicks that sets the motion into a sense of bleak, the second track Again is faster compared to the first track and is built on the raw guitar riffs of John Doe, while the song changes from higher tempo to blast beats. The new songs are fueled with black’n’roll and harsh vocals, as if the band stirred their musical ingredients from the outer space. Dividing their role into systematic performance the vocals are suspenseful, malefic and have a sense of domination, Daniel Moilanen acts a session drummer in employing slower beats to blast beats. Undone picks the pace back up immediately and creates a cold sense of atmosphere, tremolo picking riffs superbly executed with subterranean melodies that are utilized in concrete form. The bass guitar is strummed by Phil A. Cirone and he takes his part firmly along with the other members.

Craft has arranged various styles from black’n’roll simplicity to sophisticated principles of old school black metal. The constant mid tempo influences were obtained from Celtic Frost, as for the black’n’roll influences they are strongly affiliated to Satyricon’s latest albums. White Noise and Black Metal shows a great efficiency in terms of instrumentation, Tragedy of Pointless Games is dauntless and provoked with an eerie experimentation. Exploring different soundscapes while emitting dark, venomous riffs of amplified guitars that will bind you with the black’n’roll riffs, the drums are activated into a motion of speed. The primitive sound of black metal is repeated on Darkness Falls, with powerful and stomping riffs that transform the sound into violence. The band has been working on this album for a while and it seems that seven years of hiatus has somehow stirred their inspiration.

The album features an instrumental track Crimson which is composed of sharp tremolo riffs, YHVH’s Shadow is a grim soundtrack to space and profusely thrilling with its catchy melodies and strange growls. With the sequential tunes which are harmonized by the guitar patterns, and effective metamorphosis, the final track White Noise is catchy where the band delves into darker territory, the complex structure of this track refers to the band’s longevity in black metal.  And this is to say that Craft are capable of producing a diversified album of quality songs and varied contents which make it very amusing with every listen. White Noise and Black Metal is composed of homogenous parts of experimental elements, and it’s far from being labelled as a monotonous record of one generic flow. It’s a perfect hybrid of Void and Fuck the Universe that is alternated between bleak passages and balanced with heavy refined riffs from the modern elements of black metal style.