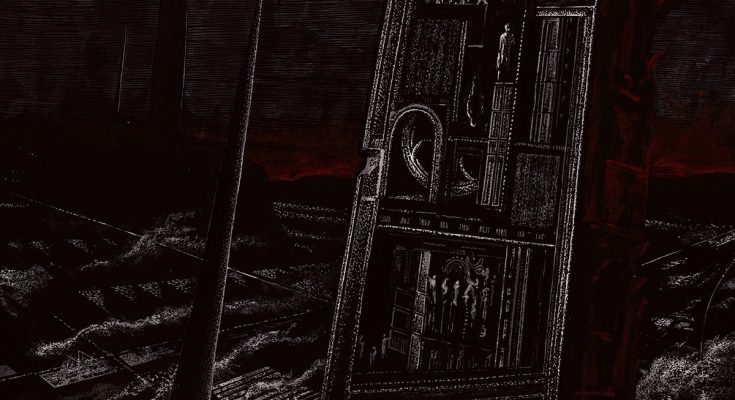 Deathspell Omega have been maintaining their style with complexity and sophisticated songwriting, the anonymous French black metal outfit has excelled at high level of achievement. ​Being one of the most innovation bands coming from Europe, the seventh full length album from the masters of dissonance and technical black metal is now upon us. The Furnaces of Palingenesia is one of the most anticipated albums of 2019, since the beginning of their formation DSO have managed to be among the most effective black metal bands alongside Mayhem, Darkthrone and many more. DSO became the paradigm of the third wave of black metal bands by their post millennium and revolutionary traditions.

Three years after the release The Synarchy of Molten Bones, DSO returns with yet another darker and hellish black metal record. The bleak opening track Neither Meaning nor Justice swerves into the refined technicality where the band uncovers the progressive elements of black metal. The songwriting of the new album consolidate on slower and disharmonious riffs and shapes into a bleak atmosphere.​ With the wicked growls of Mikko Aspa that integrates with the chaotic blast beats. Conspicuously DSO seeks to retain the signature style on every record, as they intent to push the avant-garde methods into undiscovered boundaries. Considering their technical clinches I can say that none of the newer track resembles their older albums, on the other hand the dexterity of dissonance on Fires of Frustration is heavily laden with jarring and inharmonious riffs.

The high efficiency of the guitar technique and the avalanche of the blast beats are incredibly powerful on the new record. Also the level of skillfulness became one of the main attributes of the band, DSO constantly morphs between the slower paces. The intricate songwriting is mainly fused into the bleak and progressive black metal flair. There are many desolate soundscapes and dark melodies which are brilliantly woven into the song texture.

Ad Arma! Ad Arma! morphs into the eerie atmosphere and the degree of dissonance is skillfully performed. From the beginning DSO have developed a certain method and over the years they have reached to the pinnacle of their songwriting class. ​Splinters from your Mother’s Spine is approached by the unique standards and processed by the amalgamation of the sharp jarring riffs. Which integrates with Mikko Aspa’s grim snarls, the drums doesn’t follow the typical course of black metal blast beats. As they are more jazzy and varied than most of the black metal acts. DSO experimental take on music is approached by the technical extremity and the plethora to dissonant riffs.

The Furnaces of Palingenesia is a complex album and generates from the aural style of previous album. But despite of the chaotic parts and highly refined guitar sound you can hear the jazzy influences which are beautifully integrated with the disharmonious elements. Imitatio Dei is a perfect example of the band’s latest progression, as there are plenty of energetic jazz rhythms on this track. The obscuring tonality on 1523 are elaborate by the slow guitar progression and grim whispers. And this shows us the fascinating creativity and the innovative ideas, DSO still sound primitive and raw their style is authenticated within the spectrum of black metal.

The Furnaces of Palingenesia covers eleven tracks with calculated short tracks of average three to four minutes long. The fast moments of Sacrificial Theopathy are specified by the fast tempos and blistering blast beats. Every guitar tone has a fine selective note, especially the snarling growls that captures the signature style of the band. Other outstanding tracks like Standing on the Work of Slaves contains many experimental details from the fine guitar performance that boost the dark and refined melodies, this is nothing but a marvelous work of art. The technical foray resulted into another monumental album with Renegade Ashes shows more of a balanced song structures, where the melodic elements have an ideal atmosphere along with the progressive sections.

DSO eerie experimentation is modified by technical brilliance, that requires specific skills when it comes to progression. All this evolution was due to their most enigmatic puzzle “Paracletus” that has defined their innovative experimentation. ​With the unique formula of injecting chaotic velocity and twisted riffage, the traditional cliché of polyphony style which the band have infused them to the song composition. DSO became the masters of cacophony techniques, so intensely ferocious but highly leveled at technical eligibility, and the new album is another bizarre piece of black metal dexterity.

2 thoughts on “Deathspell Omega – The Furnaces of Palingenesia”