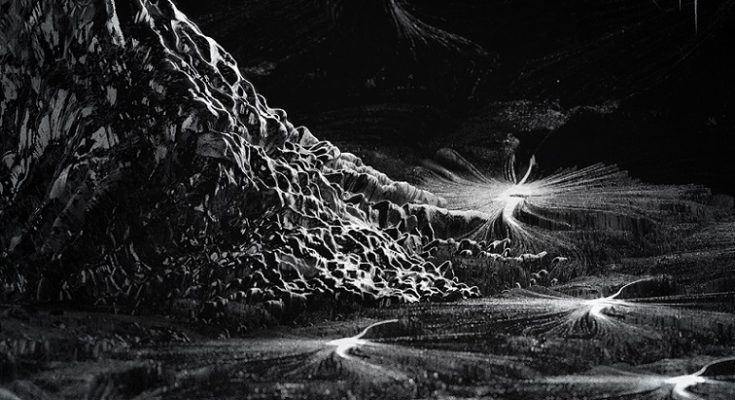 Druon Antigon is the solo project of Lennart Janssen, and right of the bat I can say I am absolutely amazed at the songwriting and craftsmanship being shown on this record. While “cosmic” black metal isn’t anything new (think of Darkspace), I am rarely surprised by a band that actually pulls it off this well. The record isn’t just black metal though, there are a lot of electronic influences present here and not only in the background. Ice cold black metal pieces are mixed with parts that remind me of dubstep and even triphop.

Let’s start with the first track. ‘Zinloos’ begins with howling ambient sounds and synths slowly building up intensity towards a wall of sound consisting of fierce blast beats and razor-sharp riffs. While this is pretty typical black metal, even with the subtle synths, the switch to pure glitchy triphop is sure to catch you off guard. It is unreal how naturally the genres shift and play with each other without losing atmosphere, if anything, it only enhances the image of a spaceship floating through the vast and lonely emptiness of space.

The second track ‘Herrijzenis’ is a more subtle combination of genres. While it does start with heavy synths and a catchy beat it is more traditional in it’s structure and doesn’t hit the listener with a sudden genre shift, like the one witnessed on ‘Zinloos’. After the ominous intro the beautiful haunting tremolo-picked melodies are supported by almost industrial beating and an ambient break in the chaos gives room to the conclusion of the song that right until the end only grows in intensity.

‘Like Gods’, like the previous songs, opens with glitchy beats, ambient waves and weird static but this time for almost half of the track. The general feeling here is more threatening than what we just experienced. While the previous tracks felt like an exploration, this one feels like an attack. Besides the ambient buildup, the speed is kept up and the melodies cut like knives in your ear, getting more chaotic and frightening but definitely not losing its beauty.

Observe ye everything that takes place in the heaven, and the luminaries which are in the heaven, how they do not change their orbits, how they all rise and set in order each in its season, and transgress not against their appointed order. Behold ye the earth, and give heed to the things which take place upon it from first to last, how steadfast they are.
‘The book of Enoch (Chapter II)’

With this famous quote, the tone is set for the last track of this macro cosmic album. A twelve minute epic story which for me combines the different aspects almost into a perfect blend. Faster and slower pieces compliment each other, the melodies drag the listener down while the synths on the background pull him or her back up again. Around halfway you get some room to breath with some nice and quiet melodies, another electronic beat and trippy sounds. This break was truly needed as the last part is incredibly intense. Black metal starts to rage again with a beautiful dragging and dramatic melody that on the first listen immediately caught my attention.

It is absolutely amazing how black metal and electronic elements from other genres are interwoven on this record. While Druon Antigon aren’t the first to do it, it definitely is one of the best examples of how you should. The ambient and electronic parts truly serve as a world-building element which, combined with the thick yet clear production, transform this into a record that is almost like an audible version of the movie Event Horizon. I would also like to mention the awesome artwork that perfectly encapsulates the atmosphere of the album.

Fans of Darkspace and Mysticum should check this out for sure, it is one of the most original black metal albums of this year and I personally can’t wait for a follow up to this epos.