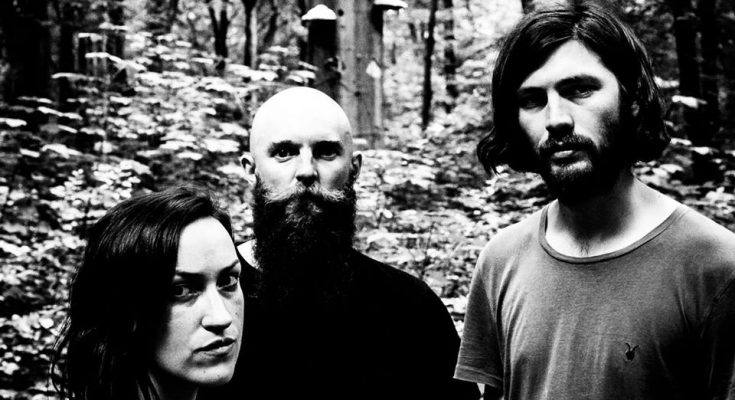 Once in a while you encounter bands you wish you had known for ages. This was the case when I read that Season Of Mist had signed British dark atmospheric rock band Esben And The Witch(*****) in July of 2016. Not having heard anything from this band, I was intrigued by their name. Result? It turns out the name is derived from a grim fairytale, and the music they play is at least equally haunting. Esben And The Witch released their latest opus, Older Terrors (a title that bears a huge Lovecraftian influence), at the end of 2016. On Thursday, February 23th, they performed at Charlatan to conclude the first leg of their European tour. Credit due where credit’s due, we wouldn’t have been able to witness this without the Ghent organisation Scratch+Snuff.

After withstanding some of the coldest and strongest wind I’ve felt in ages, we could enter the quite legendary pub. I can easily summarize the concert in only three words: “What a voice”. Always when I go see bands with fragile, clean vocals, I tend to get a bit anxious. If the vocalist can’t get his or her voice really clear and steady, it’s easy to disappoint. Especially when the vocals on the album versions set such high expectations. But let’s be clear: Rachel Davies’ voice was ‘on point’. After the first minute of Sylvan, the first track of the latest album, Davies proved herself. After a few notes she dragged the crowd into a dreamy, yet sometimes gloomy mood. Just when you fear the singer and also bass player will reach the limits of her capacities, she gently abolishes all your expectations and drags you further into her dissociative world. Vocal-wise, this concert proved to be a very enchanting 90 minutes, since Davies’ voice didn’t weaken at any time.

What Esben And The Witch showed us is that beauty can hide in dark places, and the sometimes ominous drum patterns proved this. Long build ups combined with sometimes explosive, post-rock sounding climaxes (listen to Marking The Heart Of A Serpent) support the haunting vocals. Again, in a live setting, without missing one hit. At the same time the guitar tunes make me think of Pink Floyd-esque psychedelic music and post-punk such as Les Discrets, while at the same time evoking the weirdly attracting emotions I would normally feel at an atmospheric black metal gig. Esben And The Witch provided a wall of sound, fragile yet immersing.

In the end Esben And The Witch played about 8 songs. They started with the first two songs of Older Terrors, namely Sylvan and Marking The Heart Of A Serpent. From previous works, The Jungle was performed. Next to all this, we were also presented with a new song, sparking my curiosity for future releases. But in the end, it actually doesn’t matter which exact songs they played. The longer extent of the newer songs allows the listener to drift away from reality, but in conclusion it’s Davies’ voice guiding most of your experience. I’m not the journalist to throw around superlatives and meaningless compliments, but this concert was truly astounding. When you can close your eyes and just drift away, you know you can’t say a bad thing about a concert.