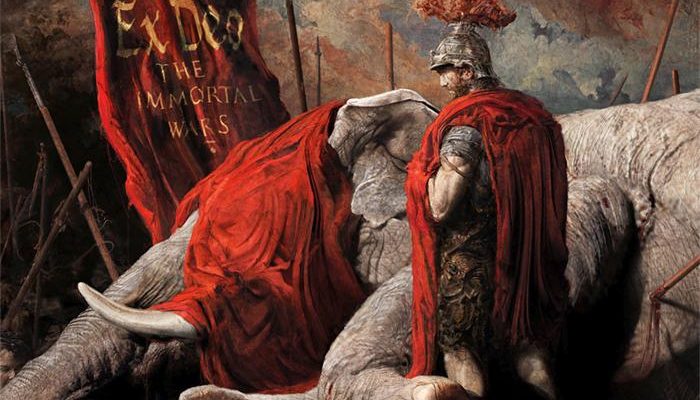 The Immortal Wars is the third feat of Kataklysm’s Maurizio Iacondo’s heroic campaign to ancient Rome under the name of Ex Deo. From debut album Romulus over successor Caligula, this album continues the pattern of increasing attention to the symphonic components of the music. Earlier, choirs and harmonies were subservient to the brutal stampede of guitars and Maurizio’s roaring voice. Throughout The Immortal Wars though, it becomes more and more clear that the symphonic elements have taken over the role of main carrier of Ex Deo’s music. The symphonies are more sophisticated and well considered. Clearly, inviting Carach Angren’s Dutch composer Ardek has proven a very fruitful idea. The music has a very theatrical touch to it and at certain points, comparisons with the more recent symphonic work of Nightwish and Dimmu Borgir are not out of place.  Do not be mistaken though: despite this raised attention to symphonic composition, this album has a killer bass tune and is still brutal as fuck!

As always, this album tells of the history and culture of ancient Rome. Again, the concept is built around an inspiring personality: Hannibal Barcas, the Carthaginian general who came close to bringing the mighty Roman Empire to its knees (for historical analysis, see below). The first three songs (The Rise Of Hannibal, Hispania (Siege Of Saguntum) and Crossing the Alps) are sung from Hannibal’s perspective and are generally somewhat softer than the second half of the album, which represents the Roman perspective. They are rather accessible, calm and somewhat nostalgic songs , probably telling of the great future Hannibal saw for his nation and the hardship he sent his men through to achieve this feverish dream.

The largely instrumental, theatrical intermezzo Suavetaurilia separates Hannibal’s perspective from the Roman part, which starts at Cato Major – Carthago Delenda Est. Immediately, we notice that the music gets a lot heavier and harder, reminding more of Romulus. This is a good thing, for if they had kept the same tone, it could have got boring after a while. Nevertheless, orchestra and some cool oriental sounds remain present and even increase toward the end of the album. Ad Victoriam (The Battle Of Zama) doesn’t really bring much new to the show. The best songs of the album are The Spoils Of War and red lantern The Roman, which are both brutally up tempo and incredibly orchestral at the same time.

At the start of the album and the first couple of songs, I feared a mere repetition of Ex Deo’s previous work. The truth proved to be quite the opposite: there is a lot of variety and a good balance between heavy Death Metal and Symphonic Metal and the songs keep getting better and more sophisticated. In this respect, Ex Deo is more comparable to Fleshgod Apocalypse and Oracle, presenting a comfortable level of steady predictable composure, rather than more Brutal Death Metal oriented symphonic bands like Winds of Plague (a lot of unpredictability there). The respect for and eminence of these past civilizations is literally dripping from this album and it has been a very epic journey. This makes The Immortal Wars a very mature album, in my opinion their best piece so far.

Ex Deo stays pretty loyal to the traditional story of the Second Punic War (218-201 B.C.), but doesn’t shun some romanticizing. The Rise Of Hannibal explains Hannibal’s hatred for Rome (the defeat of his father Hamilcar and Carthage in the First Punic War). Hannibal was not, as is suggested however, some kind of king or dictator who assumed the throne: he was a general fighting for the Carthaginian Senate, nothing more. Hispania (The Siege Of Saguntum) tells of the casus belli: Hannibal’s conquest of the Hispanic city saguntum, allied to Rome but in the Carthaginian sphere of influence. It is an exaggeration though to state that Hannibal did or wanted to conquer the whole of the Iberic peninsula. Rather, he bribed the existing tribes to gain passage on his way to Rome. This got him as far as the Alps. Crossing them was a very hard endeavor and cost Hannibal a lot of men and elephants doing so (as audible in trumpeting elephants and lashing whips). The desperation Hannibal must have felt, as well as his determination and hope to achieve his glorious goal, is clearly felt throughout the feverish Crossing The Alps.

The intermezzo Suavetaurilia (sic) is a very interesting element and proves that a fair share of research went into the creation of this album. Despite some errors in Latin, Ex Deo recited an entire ritual phrase quite correctly. It also makes sense that a Suovetaurilium sacrifice would have taken place. This sacrificial rite, consisting of the slaughter of a pig (sus), a sheep (ovis) and a bull (taurus) took place to consecrate new lands or symbolically reinstate the integrity of soiled land (in this case, the Roman territory). It was also held to purify troops at the start of an important military campaign. The introduction of the eastern cult of the Magna Mater (the Great Mother goddess) proves that Rome, in its desperation, went through several ritual reinforcements and having a Suovetaurilium could have been one of them.

Cato Major – Carthago Delenda Est is about the Roman answer to Hannibal’s attack on Saguntum and the Roman empire. Cato the Elder was a writer and senator – not a soldier! – who deemed Carthage such a threat that he would end each and every of his speeches, no matter the actual subject, by the phrase “furthermore, I really think Carthage should be destroyed”. The song also introduces the Roman hero Publius Cornelius Scipio, who was sent to Africa by the Senate to suit the action to these ominous words. The song advocates the virtue and fighting spirits of the Romans and their dedication to the ideal of Rome as the Free City.

A strange gap follows. The years between Hannibal’s arrival in Italy in 217 and his defeat in Zama Regia in 202, are barely touched. One would have expected at least a song about this intriguing game of cat and mouse, which almost led to the fall of Rome. Instead, we skip to the final battle between Scipio and Hannibal, the latter of which ending up horribly defeated. Scipio’s determination is felt in phrases like “This time, we end it all // Hannibal, face your nemesis // I am the general you cannot kill // I am Roma Invicta // Bring me the head of the Lion“. The Spoils Of War is the conclusion of the story of the Second Punic War, nicely touching Hannibal’s solitary flight to the east. Carthage did not get destroyed after this war, as is briefly stated in the song: this only happened after a Third Punic War.

As usual, much attention went to recreating the epic sphere of Roman greatness. This can also be seen in the keen yet very romantic album artwork design. All of this does not at all represent the actual thoughts of the Romans (if they would ever attend an Ex Deo show, Maurizio and his friends would instantly be thrown off the cliffs for being an ominous prodigium), but is is a suiting portrait of how the common audience likes to remember them.  Spatial and temporal distance is also successfully created by the introduction of war samples and some odd oriental tunes from instruments long lost. As a final comment, it is nice to hear how Ex Deo got in some eastern sounds, depicting the oriental civilization both Rome and Carthage were. Overall: Ex Deo, I salute you!