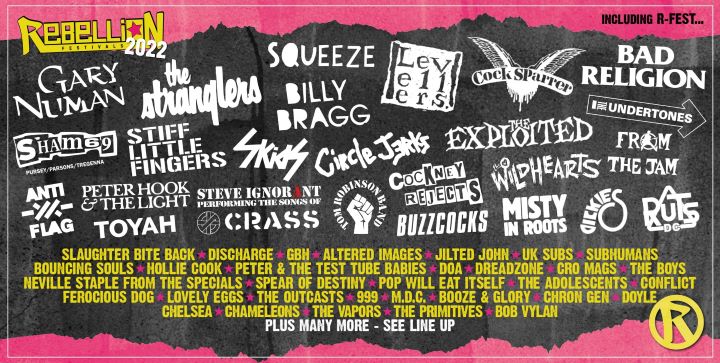 Day 4 and the end is in sight, just a few more hours to go!

Time to take stock -this festival has been brilliant for a number of reasons;

a) The organisation has been superb. I have had no problems getting in or out of either the main building or the smaller venues inside. In most cases the bands have gone onstage and finished at the advertised times.  It has also been good that you can come and go as you please, food and drink is obviously cheaper outside the venue.

b) No problems with security at all that I have seen. I know that some people are moaning about it but I think security has been great.

c) Blackpool itself, not a great place, but any locals I have come into contact with have been really nice

d) The people attending have been so good natured. Everyone is just here for the music and a great time. I did think the majority of attendees would bold men, but there are all sorts attending. Good to see so many South Americans that punk really means something to.

I decided on a quiet day today as I am exhausted and start off back at the library for a talk by Jeff Turner of the Cockney Rejects. I attended this on the strength of his performance last night and was intrigued by what he would have to say.

This wasn’t an interview, this was Jeff Turner talking to us for 2 hours straight, and what a memorable 2 hours it was! I have never heard anyone say “fuck”, “cunt” and my own personal favourite, “saucy cunt” as many times as this in my life.

We got an open and honest account of Jeff‘s life and of course that of the Rejects. Jeff pulled no punches, he admitted that some of the band’s actions only hastened their demise. But he was not bitter as they had risen again to become what they are today. We get the details of various fights that occurred at gigs and what it was like to be 14 years old and in a (in)famous punk band. He tells us why Jimmy Pursey is not his most favourite person and tells a story about his encounter with Ricky Hatton to illustrate why you should never meet your heroes.

The 2 hours absolutely flew by and was utterly spellbinding. Jeff came across as a totally honest, emotional guy who it would be a pleasure to have a pint with. His description of the last night at West Hams old ground before they left it was incredibly moving and reduced Jeff (and many of the audience) to tears as did his appreciation of the fans who come to see the band now.

A very humble man, if you get the chance to see him do this, take it, you won’t regret it. A true highlight of the festival.

After that it’s off to the outside to see the Buzzcocks. This was desperately sad and the only thing I would like to say about it is: Steve, you should have given it up when Pete died.

I would love to know what idiot scheduled UK Subs against Maid Of Ace, both terrific bands. UK Subs won out because let’s face it Charlie Harper is 78 and you never know if you’ll see him again, whereas MOA will be around a few more years yet!

Charlie really does look good for his age and always puts on a good show. Tonight was everything you would want or expect from a Subs show. Lot of old numbers tonight including ‘Party In Paris’, ‘Down On The Farm’, ‘Emotional Blackmail’, ‘Rockers’, ‘Warhead’, ‘Riot’, ‘Stranglehold’, ‘Tomorrows Girls’ and ‘CID’.

Long may Charlie keep going, I can only hope that I make it to 78!

Managed to catch about half of the Maid Of Ace set in the Pavillion. These 4 sisters from Hastings are some machine and absolutely brilliant live. Their playing is so ferocious, it could blister paint. The Pavillion was absolutely heaving with people who were all having a great time, the band deserved to be on a much bigger stage.

So, I come to the last band that I saw at Rebellion, and what a band indeed, hardcore legends from NYC the Cro Mags.

I had expected a bigger audience for this as the band were appearing in Club Casbah rather than the Ballroom. But those that were there made up for the lack of numbers with their enthusiasm. Right from the off  of ‘We Gotta Know’, a circle pit formed and the people within it were as every bit brutal as the music.

Harley cut a menacing figure on the stage, bare chested and heavily tattooed. You could see what he meant when he said the music was his release as he really put his all into it. He gets particularly emotional when he tells us the story of his good friend and band drummer Garry who suffered a cardiac arrest in Italy and died for 5 minutes before coming back to life. This was on July 28th and 5 days later he discharged himself from hospital and is back playing the drums!

The Cro Mags were a great band to bring my Rebellion to a finish, I consider myself lucky to have been here and had the experiences I did.

Everyone’s experience of Rebellion will be different, we all watched different bands and have different views as to how well they performed. That is only part of the experience though, there is also the people you meet in the pubs, the nightly punk sing a long in The Rose & Crown, the stagger back to where you are staying and then waking up the next day to do it all again. That’s what it’s all about!