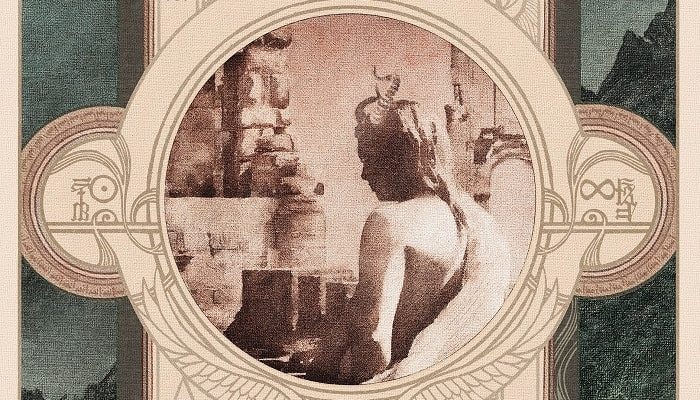 Vàn Records proudly presents the fourth studio album ‘VII Kenoma‘ of the German black metal outfit Fyrnask out since April 30th 2021. The ensemble of five brings black metal music to new standards where they channel their superior form of ritualism. The lyrical themes of the album are based on the conceptual theocracy of Sufism penned by the Persian poet Fariddudin Attar. While these inspirations invoke a sense of mysticism in their voyage through the infinite darkness to light, Fyrnask reaches a high virtue by utilizing the elements of ambient/drone soundscapes. By combining the influences of the second wave of black metal, they present an intricate method of songwriting.

Fyrnask is one of the very few unique bands that has its own, ineffable sound. ‘VII Kenoma‘ demonstrates captivating and instrumental settings throughout a full hour of ritualistic contemplation. The latest craft is reminiscent of Icelandic black metal where it delves into the dark atmospheric spectrum. The songs range from the metallic discharge of the blazing riffs to eerie synth textures that requires your full awareness. However, the songs grow in depth and leave you in some kind of bewilderment.

The opening track ‘Hraevathefr‘ takes a paradigm shift to the modern aesthetics of black metal. Although the music is quite elevated and diversified in its most complex structure, they somehow proceed slowly but gradually. The atmosphere is mostly created by dark-hewn riffs and sprawling ambient textures. Fyrnask has a very characteristic method of building the tempo. At the same time the instrumentation is intricately layered. The contemplative synth alongside the tremolo-picked riffs is richly textured and while broadening from downtempo to mid-tempo pace, the guitars orchestrate a bizarre atmosphere. Featuring six prolonged tracks that are often backdropped by harsh vocalization and distorted riffs, the drums are the centerpiece of the music that brings other instruments to order.

At times the ambient synth subdues the silence. ‘Sjodhandi blodh‘ conveys an air of atmospheric wonderment and begins with a slow drum cadence, then suddenly unleashes a wall of cacophony. The powerful effect of the blast beats and echoing rasps induces a significant use of the lead guitars. However, it is noteworthy that Fyrnask emphasizes the droning guitars to create slow, ambient passages. For instance, ‘Niðamyrkr‘ takes a slow tempo and moves with the dense currents of the thick guitars. The thudding beats of the drums mingle with the otherworldly growls as the rattling becomes raucously loud. What gives the album a unique tone is a ritualistic quality that feels deeply rooted in the psyche of the individuals. The songs reveal spiritual themes carried by hoarse throats, each lapsing minute encountered with unnerving moments.

Although I wouldn’t label Fyrnask as a direct black metal band ‘VII Kenoma‘ brims with unwordly eeriness and frightening ambient soundscapes. Another song‘Helreginn‘ is easily distinguished by its solemn choral arrangement. Backed by powerful riffs, the song has a mystical aura that feels like an intonation of a divine melody. The blast beats are utilized when needed. Therefore, the song is replete with psychedelic noise. Often the rhythm guitars are brought to focus as each instrument is harnessed to fill in the void. The musical originality on this album is delivered by high innovative art. Songs like ‘Daudhvana‘ show a unique introspection and surrealism that is beyond the traditional black metal sound.

The German ensemble depicts the art of ritualistic fantasy, full of cinematic elements that showcase ethereal textures and melodies. By conducting the methods of slow tempos, they allow the instrumentation to shine. The final track ‘Blotgudh‘ explores the epic, ambient themes that remind me of darkwave artists Dead Can Dance and Dargaard. It begins with an epic, female voice that resembles some kind of a religious chant. Its mesmerizing quality builds on faint drumming and meditative themes. Fyrnask‘s well-established sonic art makes them a rare artifact in the modern hierarchy of black metal. Like the previous output the latest album transcends the German ensemble far and beyond. ‘VII Kenoma‘ is recommended for fans of Wolves In The Throne Room, Haxandraok and Urfaust.