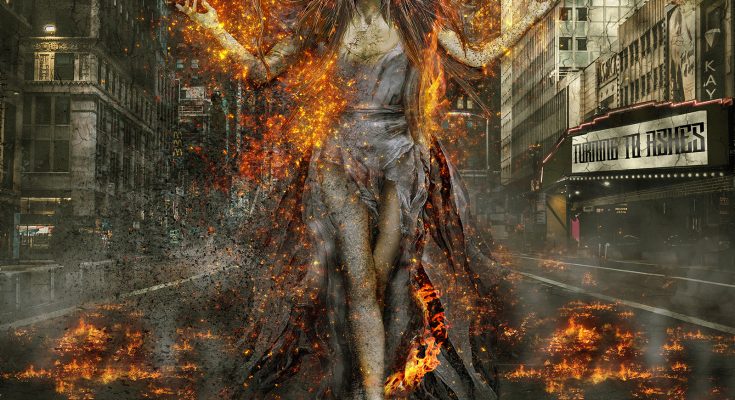 After being a cover band since 2012 and making lots of fame in upstate New York, Hearts & Hand Grenades supported the Goo Goo dolls at the Variety Kids Telethon charity event in 2019. Robby Takac ( Goo Goo dolls vocalist/bassist) was so impressed by their performance that he invited them to record at his GCR Studios. Time to work hard and write/record original songs.

The title track ‘Turning to Ashes’ is a great way to be thrown into this hard rock album. It is immediately clear what this band is about: a lot of shredding guitars and a strong female voice. After hearing the song just twice, it already gets stuck in your head.

The next songs continue with the same memorable rock energy. Everybody would want to shout along to “Raise your fist and (Hail!)” on ‘For the Weakened‘. Still going hard with ‘Daggers‘, it calms down a little bit for the power ballad ‘I Hide‘, even though it still hits harder than the usual fare. Nothing wrong with that. Back to full throttle with a shot of ‘Adrenaline‘.

The next song ‘Nothing Left’ is the very first single of the album. A great way to demonstrate this band does not mess around with this breakup song about ending toxic relationships.

‘The In Crowd’ is something different. On half tempo the almost jazzy intro and verses alternate with speedy rock refrains and solos. It’s a funny and refreshing in between the rest of the songs. Very classy.

‘Turning To Ashes’ is a very good debut album. I’m curious how they would bring it live and how much power they would bring to a live crowd. I can’t wait to hear more of Hearts & Hand Grenades.

One thought on “Hearts & Hand Grenades -Turning To Ashes”