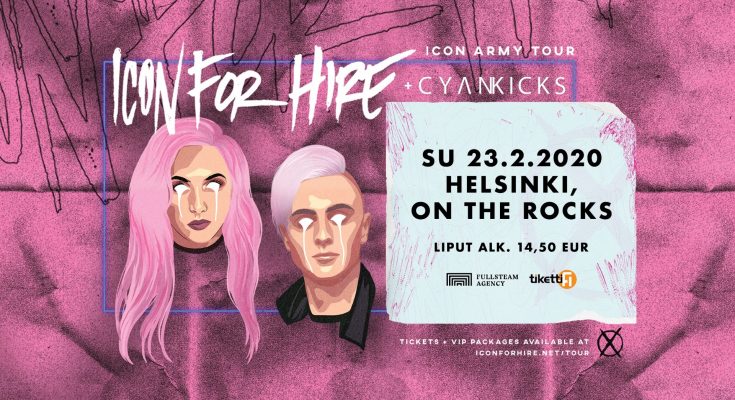 The American Icon For Hire came back to Finland after an absence of about 6 years! Their fans were thus eagerly awaiting their return. The very lovable Ariel Bloomer and Shawn Jump are all about supporting each other and sticking to your guns, staying true to oneself no matter what. And we all love them for that! So I was eagerly looking forward to see how their catchy, energetic and often poppy rock would come across on a stage in Helsinki on a dark Sunday night.

First up, to warm up the crowd as well as possible, the Finnish Cyan Kicks took over the stage. Admittedly, their music isn’t necessarily my kind of thing, but they were the perfect choice to open up for a band like Icon For Hire. They have the same poppy melodies and hooks, and they really bring quite the energy to the stage, especially the neon yellow haired frontlady Susanna Aleksandra kicked quite some butt. And quite a few of their songs like, for instance, ‘Satellite’ and ‘Gasoline’ were sang along to by the already gathered crowd at the top of their lungs!

And then it was time for Icon For Hire. As soon as guitarist Shawn Jump and vocalist Ariel Bloomer came on stage, a wave of positive energy blew through the room. With energetic rockers ‘Make A Move’ and ‘Pulse’ that energy immediately went through the roof and got people dancing to the music. Both Ariel and Shawn sought connection with their fans, regularly interacting with them, which gave the whole show a feeling of “being with the family”. Ariel is mostly inspired in her songs by personal issues, mental health and being strong to overcome your struggles and she brought that up in between songs, often dedicating a song to everyone who has ever felt the same. It made for an emotionally charged evening, making the venue a safe zone for everyone present. You could literally see how Ariel‘s words and songs lifted the spirits of all who were there. After a couple of acoustic tracks they ended up realizing that a part of the drum kit needed repairs. So professional as they are, they decided to play an extra track to keep it going, asking the crowd what they wanted to hear. After all was well again, they continued their show with a great mix of new and old songs, sending us into the night with spirits lifted and hearts full of love. We hope to see you again soon, Icon For Hire!