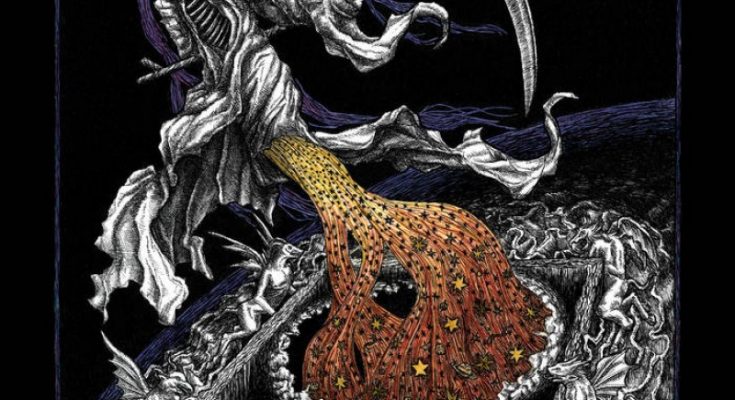 In 2020 the black metal act Inquisition returns after four years of silence, with “Black Mass for a Mass Grave”. The duo Dagon (multi-instrumentalist), and Incubus (drums) continues to expand their boundaries by taking their craft to a whole other level. Within the thirty years of defining their signature style, Inquisition reaches the zenith of their prosperity, where the eighth studio album represents a clear refinement of the band’s evolution. Since 1990 the duo has been seemingly reinventing the wheel over and over again while achieving a certain maturity. As a result of this musical growth, the latest output captures the quintessence of the aural experience which the band has offered on past albums. On “Black Mass for a Mass Grave”, Inquisition opens new musical portals with the guitars creating some kind of uncanny and palpable atmosphere. The music seems to be caught in multi-layers of emotive melodies that veer mostly at mid-tempo.

The piercing effect of the tremolo reverb on the opening track “Spirit of the black Star” echoes at a scathing tempo of the drums. As the catchy guitar melodies add texture and hooks, the second track “Luciferian Rays” tackles the Norwegian style of black metal a la Immortal. With recurring riffing and rhythmic methods, the tracks revolve around themes of Paganism, cosmology, and Satanism. Songs like “Necromancy Through a Buried Cosmos” are nothing short of how amazing the guitars boast emotional climax.

Musically, the newest album is somehow similar to what the band has offered in the past. And this is to say that Inquisition conveys remarkable dexterity, the songs sound mesmeric and catchy. At every entry, Dagon applies an unprecedented scale of high guitar techniques which provides the songs with rich opulence. “Triumphant Cosmic Death” and “My Spirit Shall Join a Constellation of Swords” are meticulously maintained at spacious mid-tempos and contain irresistible guitar chords. The guitars sound dense and heavy which provides fresh ingredients. While these qualities are in full focus from the start of the album, Dagon generates various elements from rock influences as well. One of the significant facets of the album is the lack of musical sophistication, the froggy vocal tone is no longer in use but they became anthemic. The songs sound rich and wonderfully embellished with melodies perhaps the overt use of the rhythm guitars allow the songs to shine.

However, there is a clear departure from the intricate song composition that featured on albums like “Obscure Verses for the Multiverse” and “Bloodshed Across the Empyrean Altar Beyond the Celestial Zenith”. Inquisition delivers a harmonious diversity, for example “A Glorious Shadow From Fire and Ashes” captures the epic quality of pagan/Viking black metal. The whole concentration feels divided into several aspects such as the guitar technique and ornate melodies that are instilled within the song structure, making it catchier than ever before. “Black Mass for a Mass Grave” echoes with the ritualistic and rhythmic soundscapes of streaming melodies that create beautiful textures and add a sentimental effect to the songs. Inquisition shows us a methodical approach to black metal by taking a step forward from the foundational sound.

The effect of the lofty guitar arrangement is quite impressive. There is homogeneous chemistry between the lead and rhythm guitars which gives the songs a sort of cosmic ritualistic atmosphere. By finding effectual composition and elements, Inquisition emphasizes lush landscapes. The band gives an emphasis to slower tempos, this is not to say that songs are devoid of blast beats. “Extinction of Darkness and Light” will leave you hypnotized in an endless trance the hypnotic guitar chords and the slow-paced drums are intriguing and contain harmonic song structures. Other tracks such as “Hymn to the Absolute Majesty of Darkness and Fire” and “Beast of Creation and Master of Time” have repeated patterns but they’re elaborately improvised on progressive guitar segments and sounds very organic.

“Black Mass for a Mass Grave” is a monumental work of sublime art brimmed with the grandiosity of modern black metal. Despite its long duration of over an hour, Inquisition provides dark inspiration that will captivate and make you drift across the haunting realms. This is definitely an outstanding release and absolutely a must for the fans of Immortal, Bathory, and Cult of Fire.

One thought on “Inquisition – Black Mass for a Mass Grave”