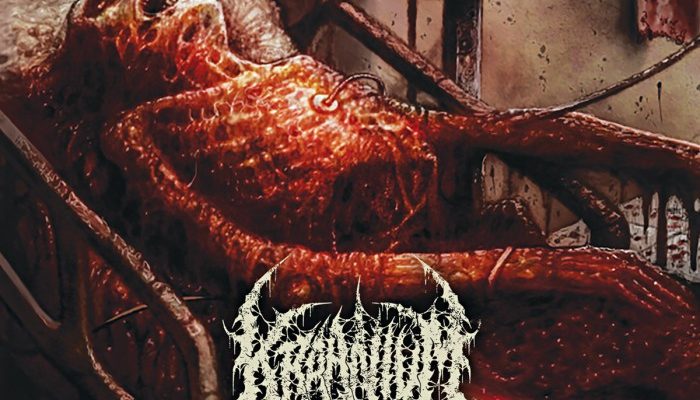 I’ve been wanting to review this album ever since it came out back in October last year, but somehow I never got around to it. Ah life’s conflicting schedules. What can you do? But here I am, catching up to the little feelings of guilt gnawing at the back of my mind. Hopefully I’ll be able to finally live with myself once I publish this.

Now, you should know ‘Slamchosis‘ is Kraanium‘s first release since the untimely death of their previous vocalist, and guitarist and founder Mats Funderund‘s twin brother, Martin Funderund a little over two years ago. It is never easy replacing the voice in a band, even in this subgenre where most vocalists sound like a city’s entire sewage system being drained at once. Indeed, one could even go as far as saying that slam death metal is the origin of the often-repeated criticism that “metal singers all sound like live pigs being slaughtered”. Anyway, Kraanium set its eye upon Danish guttural master Jack Christensen (Decay of Existence, Septic Congestion), who does a very good job at taking over the mic duties. He is impressively consistent in his squealing gutturals, and does almost nothing else. If you’re not a fan of the genre in itself, it may grow somewhat tedious but to me it’s heavenly.

Now, the lyrical contents aren’t always for me, but they’re your usual none-too-deep gory poems about maiming and killing and other serial-killer-like anecdotes, that are inherently typical to slam. We get plenty of samples throughout the album and what’s cool is that their use is consistent. They all come from the same TV show’Mindhunter‘, a good Netflix show inspired by the real-life FBI’s early psycho killer hunting unit.

The music on this record comprises of zooming end-of-the-world riffage, aggressive breakdowns that will make your face contract as if you’d just bitten the sourest lemon ever, gravity-defying blast beats and ride bells that ring louder than the chimes of the Notre-Dame’s bell tower. Well it would now, wouldn’t it? Too soon? Nah. Now, check out the full album stream below for yourself and tell me I’m wrong.

‘Slamchosis‘ si a very good slam death metal album. Perhaps I would go as far as to say it’s Kraanium‘s best. But maybe some vocal puritains or band fanboys and -girls will disagree. If you’re one of those people who watch serial killer videos on YouTube until 3 in the morning, and also happen to like death metal, you need to pick up Kraanium‘s ‘Slamchosis’.