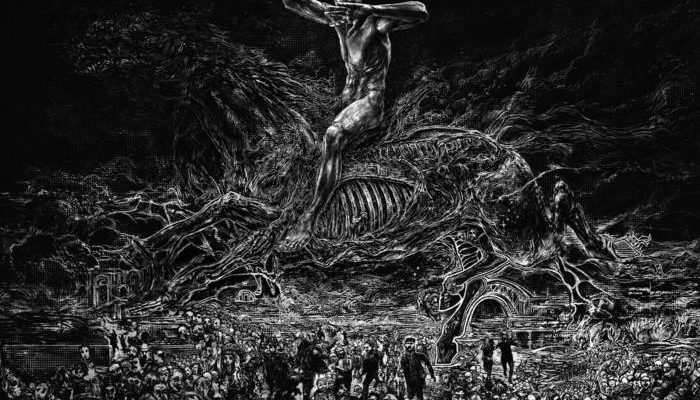 Mgła have set a high standard in the modern age of black metal. Among many bands such as Deathspell Omega who initiated at the beginning of the third phase of black metal. The Polish black metal outfit added a refined touch of modernization which manifested in the songwriting. It’s without any doubt that the return of M. and Darkside after four years of silence would bring another masterful album. The revival and the continuation of this sub-genre was also carried forth into further modifications by many bands.

At first mgła inaugurated as raw black metal before evolving into stylish and fine-tuned melodies. The gradual refinement from the debut album Gorza to With Hearts Towards None enhanced the sonic value of this superb outfit. Hence this also reflected on Kriegmaschine where both bands metamorphosed and became a contrast between melodies and technicality. And to a very great extent mgła improved and made further adjustments on the third album Exercises In Futility.

Mgła‘s musical notion depends upon creating captivating melodies where each track carries a memorable tune. Since the triumphant inception in 2005 the current lineup of the band is composed of M. (Mikolaj Zentara) vocals, bassist, guitarist and Darkside (Maciej Kowalski) drummer. The uncommon professionalism in crafting addictive qualities such as melodies became the trademark of the band.

The newest offering by mgła sees the band well established and recognized among other acts in this sub-genre. Age of Excuse is no different from its predecessors and it strongly proves the rapid ascension and the entrance to a glorious era. Even from the single which was premiered about a month ago, you could sense the musical progression. The album begins with Age Of Excuse I, where the instant melodic hooks are beautifully crafted. The focus on pedagogical tremolo pickings has always defined the essence of this superlative outfit.

Age of Excuse II initiates into a sprawling dark melodies, the elegant flair is brought by a profound amount of emotions. This particular art uncovers the chemistry between creativity and innovation. However the qualitative riffs and atmosphere are parallel to each other. There is a great balance within the tracks yet the most intelligent aspect is the musical transmutation which leads into groove and riff repetition. mgła succeeded in channeling the obscure elements and the ability to reach to dexterous level of performance by utilizing the intricate drum abilities.

Morphing into gloomy atmosphere while the drums provides an ultra-boost of energy. Age of Excuse III suddenly becomes violent with the rapid and torrential riffs which are bolstered by fast blast beats. At this crucial level mgła exploit the talents in illustrating their finest riffs to date, there is also an explicit structural approach to songwriting. There is definitely no question about the memorability and the musical consistency. These traits became recognized by their 2015 album Exercises in Futility. mgła allows the listeners to immerse in darkness, by given the melodies, lead guitar and the dissonant riffs a greater part to shine. Age of Excuse isn’t quite similar to Exercises In Futility the latest album has set its own individual paradigm.

The utter effect of dissonance that emits darker riffs and elegant combinations of post rock elements are genuinely processed. Age of Excuse V begins gently with the refined guitar notes, and once again proves that mgła are ahead of many modern black metal bands. The album is filled with musical embellishments as every musical note here is scaled to find harmony and balance. The level of instrumentation is outstanding and even in the sophisticated and emphatic beats the drums performance is mind blowing!

The creativity is mainly laid in creating a menacing atmosphere. The grim howls of M. adds the somber effect to the songs. These three compositions act as the main elements to the song texture. Age of Excuse VI finds magical ways to imbue the atmosphere into ominousness. The guitar creates vast melodies that embodies the framework of the track. mgła reinvents their black metal sound once again by reforming the patterns of second wave of black metal. Age of Excuse is a phenomenal album filled to its brim with gorgeous guitar riffs. The album is built on organic and raw principles of black metal and contains intricate melodies which are fitted to the modern age of black metal.