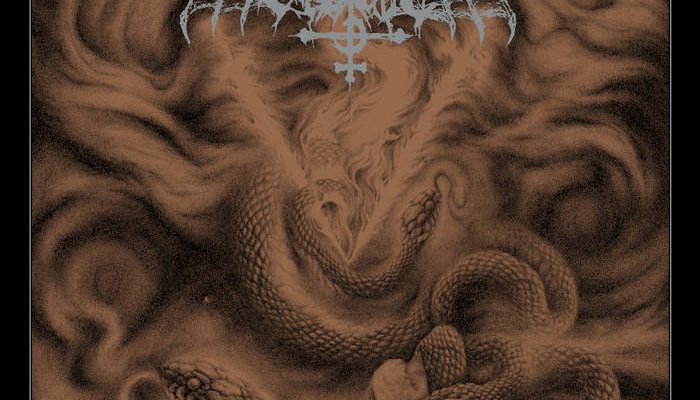 The roots of orthodox black metal go back to the pedigree of the early wave of the sub-genre. The rise of the Nidrosian movement in Nordheim, Norway, and Orthodox black metal acts in Sweden have brought new bands who embraced new ideologies connected to Satanism and occultism. Most of the orthodox black metal bands use apocalyptic themes and biblical prophecies about the end of the world. For example, bands like Watain and Ofermod present an apocalyptic vision of the antichrist ruling the world. While each band seems to have been indoctrinated in the satanic and occult belief, the Swedish black metal outfit Ondskapt exposes unearthly malice. After ten years of silence their long-awaited album “Grimoire Ordo Devus” spreads austere malevolence against humanity.

Through this fourth release, Ondskapt once again proves to be a force to be reckoned with. The new lineup includes founding guitarist and vocalist Acerbus, and talented musicians such as guitarist J. Megiddo (In Aeternum, Marduk), bassist Gefandi Ör Andlät, and drummer Daemonum Subeunt. After the year 2000 black metal entered its third phase of renewal known as the third wave, and with bands like Watain, Funeral Mist, and Ondskapt bringing fresh and innovative sound they have ultimately re-defined the genre in some regards. “Grimoire Ordo Devus” displays impressive guitar arrangements that create a mysterious chilling melody. While the album isn’t fundamentally different from its predecessors “Dödens Evangelium” and “Arisen from the Ashes” musically, the new album has more melodic elements to it. The opening moment, with the eerie prelude of voices and screams beginning its haunting spookiness of words, gives the album some kind of otherworldly feeling.

The songs are built on slow tempos before plunging the listener into an eerie darkness. With the tremolo pickings and the crushing pace of the drums, Ondskapt unleashes a hellish fury on “Semita Sinistram”. The song builds on dense instrumentation which enhances a dark and mysterious aura. The crushing pace of percussion including the double bass and blast beats gives an immense sound. Though the most powerful aspect are the high-pitched vocals and clean chantings of Acerbus. The album presents superb mid-tempo sections with great twists of lead guitars and tremolo-picked riffs adding an impenetrable texture to the songs.  “Ascension” sets up an awe-inspiring atmosphere that lasts for a moment to shift immediately to blast beats.

“Grimoire Ordo Devus” also offers some fast songs like “Devotum in Legione”, which opens to a blistering fast tempo with the guitars displaying a variation in the riff quality and rhythm. Acerbus and J. Megiddo unleash an avalanche of vicious riffing and towering leads to create memorability within the nine lengthy tracks. The production is clear and powerful but not overly polished, with a clarity of the instruments in general. Ondskapt strength lays in the transition from mid-tempo to fast sections.

With a hellish tone of tremolos adding an oppressive and gloomy atmosphere, Ondskapt shows a methodical approach to orthodox black metal. Tracks like “Animan Malum Daemonium” bring notable variations in the tempo without focusing too much on blast beats. This unique formula perfectly provides space for the instrumentation to shine, the riff structures and melodies are brought in to balance. “Opposites” proceeds towards expansive guitars solos and layered acoustic guitars, offering more textures to the song whilst the ravening percussion is measured by the swift transitions. The ominous atmosphere of hysterical laughter and the chilling effect of the clean strings on track “Paragon Belial” shows the rather new diversity in songwriting and the track is infused with thick layers of tremolo pickings and features some excellent guitar performance.

“Old and Hideous” includes much powerful riffing and an energetic drum pace but there is also a different composition of elements that gives the song a melodic quality. “Excision” draws influences from Swedish black metal with nuances to bands like Dissection and Watain.

Ten years after the Swedish quartet has returned to inflict their demonic themes of annihilation and death upon mankind. “Grimoire Ordo Devus” takes a major shift from the band’s earlier album but it certainly delivers a menacing piece of demonic black metal. Recommended for fans of Dissection, Valkyrja, and Watain.