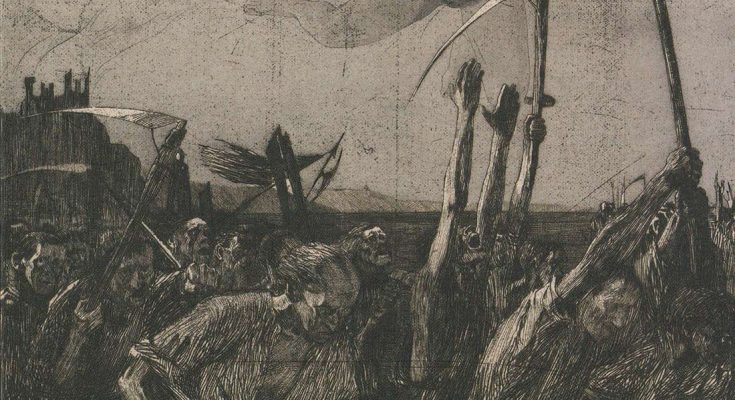 Founded in 2005, Panzerfaust is one of the most unique bands from Canada, known for their consistency and ingenious songwriting skills. ‘The Suns of Perdition – Chapter II: Render unto Eden‘ is the band’s fifth album and the second saga that depicts the powerful topics of war, darkness, and anti-god. The Canadian quartet again launch a blistering force of hateful anthems and nihilism and seemingly continue with the same approach as their previous album ‘The Suns of Perdition – Chapter I: War, Horrid War‘. There is a deep sense of conjuring the apocalyptic and terrifying visions of war and death, which are pervaded by the bleak atmosphere of the album. Musically the band shares a lot of similarities with the European black metal bands such as 1914, Funeral Mist, and Deathspell Omega, etc…

‘The Suns of Perdition – Chapter II: Render unto Eden‘ is brought by the intensity of the focused lead guitars and the thundering cannon of the drums. They’re the most destructive artillery of the band. Instead of taking a furious direction like most black metal bands, Panzerfaust conveys a slower if blistering pace. There is a powerful versatility that shows the refined quality of the instrumentation that’s somewhat parallel to Mgla. The latest effort is firmly rooted in the modern spectrum of black metal with emphasis on complex guitar arrangements which create a dark, menacing atmosphere. The opening track ‘Promethean Fire‘ is an explosively jaw-dropping song. Howling vocals give an evil sense of foreboding as voice samples echo through thundering guitars and crushing percussion. Panzerfaust focuses on high technicality to create a lush ambient atmosphere. Songs shift from a slower tempo to heavy-laden riffs at a mesmeric pace, almost like marching into a funeral procession parade through fields of death and destruction. The track also features some mind-blowing operatic female vocals by Maria Arkhipova, of the Russian pagan folk band Arkona.

Fixed at mid-tempo ‘The Faustian Pact‘ takes a different pace with its heavy pounding of war drums and visceral metallic guitars belches. It seems the band create a mesmerizing atmosphere often exploring the song’s cinematic qualities. The slow momentum of drums and atmospheric guitars reveal stylized riff-work. With enough diversity among the five tracks the band push boundaries to newer heights. By eschewing straightforward blast beats Panzerfaust takes a unique approach to black metal, giving the music a raw and wicked tone. Swaggering their artistic flair in the third track ‘Areopagica‘, drums immediately gear up for a crushing momentum while the venomous vocal delivery explodes like a powerful barbarian reverberation.

‘The Suns of Perdition – Chapter II: Render unto Eden‘ unveil the unrivaled versatility ans skill of the band. In spite of its rawness and slow crushing pace, the album sounds quite modern with its atmospheric song structures. Panzerfaust have truly developed their own sound. For example, guitar segments have a refined tone which makes melodies distinguishable and catchy. ‘The snare of the Fowler‘ veers into straightforward blast beats, carried by hypnotizing tremolo-picked riffs. Though the quality here recalls recent work by Mgla, there are also plenty of slow melodic passages that gives distinction to the band’s bleak atmosphere.

Drums and guitars are complex and technical. The chugging and the subtle melodies are comparable to Kriegsmaschine. Album closer ‘Pascal’s Wager‘ interfuses the cold guitar ambiance with the slow drum pacing, suddenly resulting in a violent eruption of blasting percussion. The final moments also include some chilling acoustic guitar.