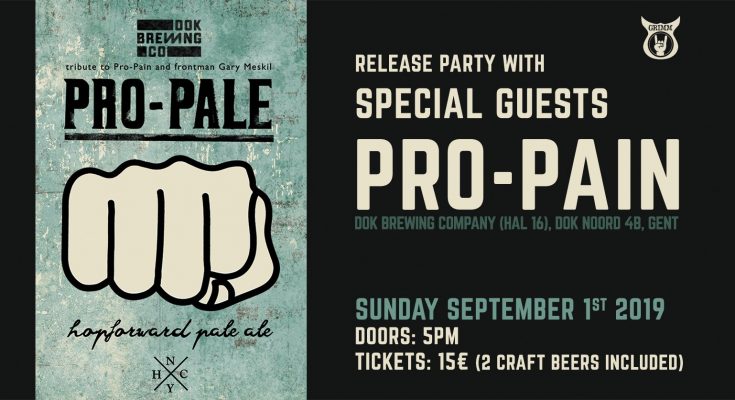 Can you believe I’d never actually seen Pro-Pain? I can hardly believe it myself since they tour Europe nearly all the time and never fail to pass Belgium on multiple occasions. This year alone I think they’re playing the country about four or five times. This time they’ve been asked to play at Ghent’s very own craftbeer brewery/taproom DOK Brewing Company. Why there? Because the brewery is dedicating its newest beer to Pro-Pain‘s vocalist, Gary Meskil. Now let’s grab ourselves a glass of that Pro-Pale we’ve been hearing about and see what’s what.

For starters I want to mention that DOK‘s Pro-Pale is a fairly good beer. I thoroughly enjoyed this bitter blonde and its hoppy taste, although I admit I was surprised at said enjoyment. The hops used for Pro-Pale are Sorachi Ace hops, which if you didn’t know, tend to remind some people of the taste of coriander (cilantro, for my US sisters and brothers). And I hate coriander. I’m one of those people for whom the herb tastes like soap. But I didn’t get that here. The hops just gave the beer the right amount of zingy bitterness I was looking for. I even treated myself to a few more while we were waiting for Pro-Pain to start their set. Expect a more detailed review in our Pick Your Poison column!

And then up came Pro-Pain. Meskil and the gang took their places on stage to thunderous welcoming applause, as they prepared to launch a solid forty-five-minute set full of old school and groovy New York hardcore. Playing one banger after the other, Pro-Pain made sure the heat quickly skyrocketed inside the brewery.

The sweaty crowd, while quiet at first, did a some point start to feel the buzz. About halfway through the set the center stage erupted into a friendly mosh pit in which the fans rocked out for the remainder of the gig. Not surprising as Meskil kept the energy up by taunting us to give it all we had and having us fist pump to the rhythm of classics the likes of ‘Death Wish‘ and ‘Voice Of Rebellion‘. Pro-Pain even went as far back as 1992 during the encore with ‘The Beast Is Back‘.

Before leaving the stage and the beer for us to drink, Meskil gave a big round of thanks to DOK Brewing Co., among plenty of others, for dedicating the beer after the band. Then came the encores and they took off for a bit of socializing.

Thus ended my first time seeing Pro-Pain. It sure as hell won’t be my last. Now let’s grab another Pro-Pale.