Home Death Metal Revel in Flesh – The Hour of the Avenger 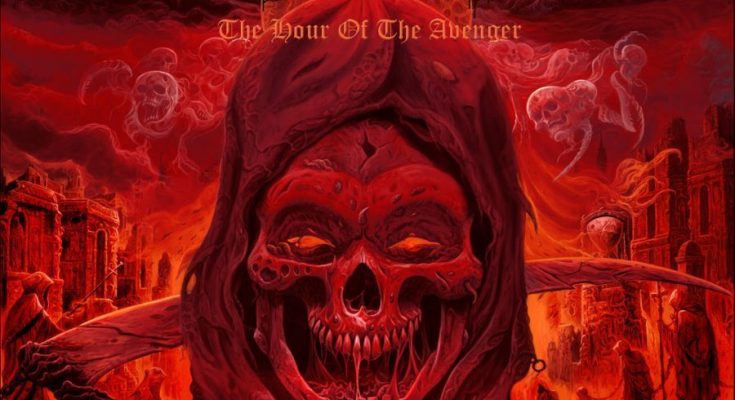 Hailing from Schwäbisch, Germany’s Revel in Flesh made a clear impact in the underground death metal scene in Europe. Since the debut album Deathevocation, Revel in Flesh began modestly carrying the passion of the traditional style of the Swedish death metal. In the last couple of years they were able to develop musically by showing improvement with their recent albums such as Emissary of All Plagues and the 2017 live album Live From the Crypts. Relatively speaking the German death metal quintet has reached to a standardized and consistent level but they are still cannot be compared to other acts such as Demonical, Puteraeon and Entrails. Since the beginning of the nineties era of death metal the German death metal bands like Fleshcrawl showed a strict faithfulness to the traditional Stockholm style. Now on their fifth album entitled The Hour of the Avenger, Revel in Flesh seems quite solid and fortified.

With such massive improvement in the guitar department handled by Maggesson and vocalist/guitarist Haubersson. Who both provide amps full of melodies and catchy rhythm guitar which recently has been the main strength of the band. The opening track The Hour of the Avenger is boasted by the fine abilities of the guitars and double bass handled by Henriksson. While the strong growls of Haubersson are indeed brutal, the drums on the new album sound quite solid. On the second track Trial the guitars carry the vibe to the old school sound with gnarly melodies matching the riffs and the tempo. The Hour of the Avenger is a mid tempo album and well-structured by the individual abilities of the members.

It’s noteworthy to say that the twin guitars on the album are impressively executed specially the rhythm section which is very sensational. And with the thudding bass guitar handled by Gotzberg, Revel in Flesh provides a strong sense of musicianship. The band saw a change in the line-up when the former drummer Vogtsson departed from the band after the release of their first live album in 2017. Now after two years of gap Revel in Flesh re-generates their musical formula as they return to cement their sound. The Hour of the Avenger is a rational continuation from the previous album only this time the German quintet decided to bring melodies into full focus.

For example, Blood Oath which begins with a multiple melodies while the booming lead guitar works in excellent conjunction. For a moment I kept thinking if Revel in Flesh are vying with Amon Amarth or Entrails. Fact is the band has never sounded so melodic before, the latest album is centralized upon the modern style of melodies. The Nihilistic Nothingness is an ideal example of the band’s latest development. Surely the melodies on the latest offering sound more refined than the past albums. The album combines aggression and melodies with influences from acts such as Entrails, and Amon Amarth.

The music generally features some catchy melodies and hooks laid by the guitar segments. However the drums here are mainly adjusted to bring the balance to the tracks without emphasizing on blast beats. Therefore the album is confined with aggression and solid drum beats. On other tracks like Deathblow, Revel in Flesh shows aggression accompanied by melodies and deep growls. The blast of energy on the seventh tracks Pervertin Speed Kill somehow lacks the brutality but nevertheless the track becomes centered on melodies, with drums providing blast beats and double bass. Yet these ethos increase on tracks like Wayfarer where the riffing style becomes more varied in terms of melodies. The focus on rhythmic creativity surely defines the quality of music on the new album.

The Hour of the Avenger is a catchy album which includes many memorable moments from the melodies and aggression. The last couple of albums have shown clear achievement in terms of quality and music. But those who demand aggression and brutality will find this album stuffed fully in melodies. This is still a good album by Revel in Flesh but the problem is that most of the tracks sound identical to each other. Despite of the solid performance the latest album is still above the mediocre records that came out this year. The Hour of the Avenger also includes many slower mid-tempo songs and one bonus tracks of Motörhead’s song Rock Out.