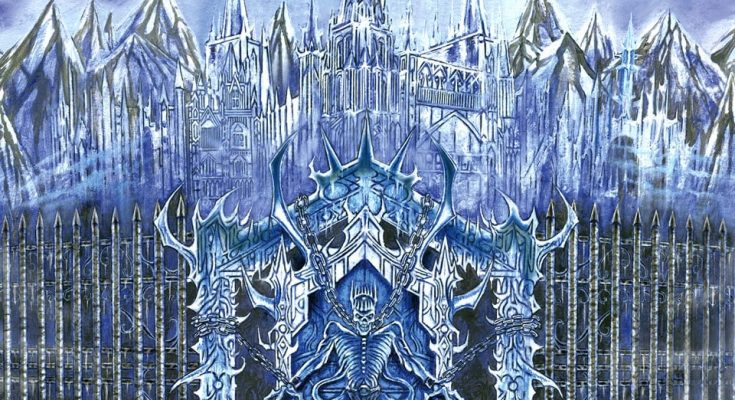 The era of the 90’s black/death metal was remarkable phase for the primary Scandinavian bands. In that period of time many bands have provided a unique style of melodies to distinguish themselves from the Norwegian black metal groups. In Sweden precisely the band Dissection played a significant role and defined the term blackened death metal. Therefore when I look at the history of the Swedish melodic black/death metal bands I see Dissection as the main root of inspiration. Other bands like Dawn, Sacramentum, The Moaning and Lord Belial fall in the similar style of blackened death metal. While other bands like Unanimated, Eucharist and Decameron were among the many extending branches to the attached root. For most of these bands have brought originality and identity to the Swedish underground metal music.

From my humble understanding and observation whenever I come across a shimmering blue and icy crystal album cover. That band has to play that blackened death metal style of music! As an example to the thematic aspect is the German black metal outfit Thulcancra and their explicit inspiration to Dissection. Other valid model is the band The Spirit whose album cover is also depicted in shimmering blue. In similar case to the related subject is the Swedish blackened death metal band Sarcasm who carry the same musical revelation from Dissection. Esoteric Tales of the Unserene is the third album that carries the melodic semblance of Storm of the Light’s Bane. The band appeared from the Swedish black metal scene in the year 1990 and released a number of demos and a few compilations. And for this reason when you listen to their newest album will hear the old school influences that elicit the early Scandinavian style of melodic black metal.

The newest album is a great accomplishment from this Swedish quintet band who has cemented their music convincingly. Esoteric Tales of the Unserene is an album that you should be listening to if you consider yourself a fan of melodic blackened death metal style. The opening track Vortex of the Vultures begins with blistering tremolo pickings and storming blast beats like a falling avalanche. The focus on aggression and chilling icy melodies are both intertwined and they’re followed by grim black metal vocals. The guitars mainly emphasize on melodies and there are plenty of blackened riffs which are akin to Dissection style of riffing.

On the following track Parochial Past Resonates the Swedish blackened outfit showcases their technical talents. And the twin guitars emit these wintry melodies profusely, it’s important to note that band has reached to an excellent level of musicianship on the new album. Concerning the melodies they are quite memorable and the riff craft is impressively demonstrates. Sarcasm musical dexterity and technical proficiency comes from the rhythm and the lead guitars. Sarcasm understands when to increase the tempo and when to slow down. Most of the tracks here build their momentum when the lead guitars adds the melodies which results in slowing down the tempos. Those who are familiar with the classic era of the Swedish black metal will embrace the dark melodies.

The use of clean guitars on Flesh Was Carved Out from Seven Faces of God creates the melodic passages. The album is thoroughly balanced between the epic melodies although the approach here isn’t considered as raw as other black metal bands. The band plays mid tempo black metal at best but there are moments when the band unleash considerable amount of blast beats. In the slower parts the melodies are sufficiently applied to add to the atmosphere. Other elements like minimal synth on Flawless Anomalies makes this track a timeless classic.

Sarcasm plays a highly sophisticated black metal style in reminiscent to classic albums such as Sacramentum’s Far Away From the Sun and Dissection’s Storm of the Light’s Bane. Even the riffs are very much influenced by Jon Nödtveidt, the third album displays a unique mastery in terms of the lead guitars. Revolution of Consciousness and Realm of Shadowless Existence are both fast paced tracks. In other words Esoteric Tales of the Unserene evokes the timeless classics of Swedish black metal. However their most melodic and dark epic track on the album is the mid paced track Celestial Nights.

A melodic riff laden of epic majesty the guitar tone in the beginning of the track and the chorus is quite catchy and inspiring. As far as the track proceeds you will hear some memorable interplay between the acoustic guitars and the flowing symphonies. It’s not only the elements which makes Esoteric Tales of the Unserene a beautiful album, Sarcasm on their newest effort have sought to enhance the performance to a greater level. The final track “The Great Calm Embraced” is yet another highlight track delivered with the authentic blackened riffs and dose of Nordic melodies that would attract the fans of Dissection. Therefore I will not be surprised if I see this album on the top of best black metal albums of 2019.