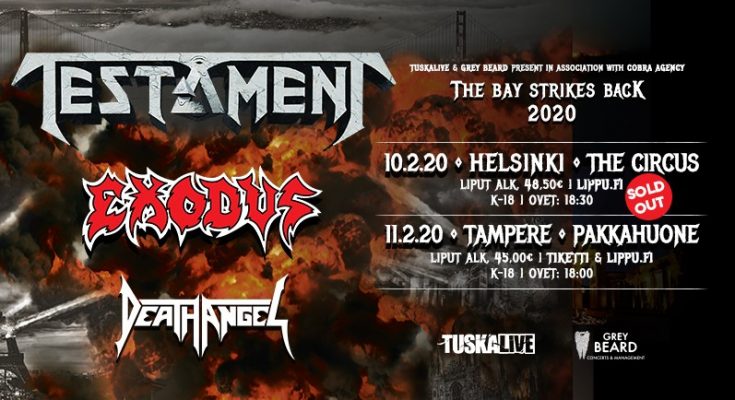 When this line-up first came in sight, I barely could believe the epicness that it promised. 3 of the most influential bands of the thrash metal genre, all from the legendary Bay Area, banding together to form one epic bill for a trek through Europe showing what a real thrashing looks and sounds like. Having seen almost all of the “Big 4” and “Big Teutonic 4” of thrash last year, it felt like I could not miss out on catching another set of important thrash bands. So there I went on a stormy day in Helsinki, to a sold out venue to get warmed up by the energy that most definitely was about to erupt in the place…

And talking about stormy… the remnants of a storm that earlier wrecked some destruction in central Europe made the trip by ferry from Sweden to Finland particularly interesting for the bands. From what I heard, gear got stuck on the wrong side of the sea and the show almost didn’t happen. Luckily this once in a lifetime evening still took place…

First up: Death Angel! These dudes came on stage and immediately set the tone for the rest of the night, kicking ass and taking no names. Rob and Ted shredding away on their guitars and vocalist Mark riling up the crowd almost constantly. It didn’t take long for a moshpit to erupt, which is pretty impressive in a country like Finland. Between songs, Mark thanked everyone there for supporting heavy metal, expressed his joy about these 3 bands finally, for the very first time, being on tour together after all those decades being friends. On top of that, this was the first time in 16 years that Death Angel came to destroy a stage in Finland! Much too long, here’s for hoping that it won’t be taking as long anymore from now on after seeing the reaction of the crowd to their show this evening…

Setlist:
Humanicide
Voracious Souls
Claws in So Deep
Aggressor
The Dream Calls for Blood
The Moth
Seemingly Endless Time
The Ultra-Violence / Thrown to the Wolves

I have the feeling that everyone was looking forward the most to see Exodus this night. Because Gary is back! After his long trek with Slayer on their goodbye tour, Gary Holt is back home where he belongs. And you could feel that the energy within the band was on new heights. The band came on stage, vocalist Steve “Zetro” Souza stormed on stage like a whirlwind and off they go. If you thought that with Death Angel you had seen a bunch of beasts on stage, Exodus took it to yet another level. Souza ran all over the stage, much like Gary, and regularly came to stand on the speakers to get closer to the fence and thus his fans. The energy felt like a pulsating, living being and I can imagine it was exactly the same back in the day in the Bay Area, just like Souza told the crowd. Gary is back, Exodus is back, can’t wait to hear the promised new music!

Setlist:
Body Harvest
Blood In, Blood Out
Deliver Us To Evil
Fabulous Disaster
Deathamphetamine
Blacklist
Bonded By Blood
The Toxic Waltz
Strike of the Beast

Finally, one of the hardest working and most beloved old school thrash bands around came to take over the stage. Testament is going to release a brand new album in a couple of months, but today it’s mostly about the old school. When they came on stage, the colors of the light show completely changed, bathing the stage in mostly deep red, setting a completely different mood from the other bands that came before them. Very noticeable despite its size, was the makeshift backdrop consisting of a Testament band shirt.

This shows how the band was taking it in stride that the truck with their gear got stuck in Sweden because of the stormy weather. At least they made it, even without gear or clothes, and with the help of their friends of Exodus and Death Angel, they actually could play the show still. Or like vocalist Chuck Billy was joking about them loaning the gear: “it’s like Exodus covering Testament, right?”.

They didn’t let it slow them down one bit and with the old school set they brought to the table, they made a lot of fans happy and showed what a good thrashing is all about. They even threw in a couple of tour firsts into the mix like for instance ‘Raging Waters‘, dedicated to the rather violent sea they had to cross to get here. More towards the end of the set, they added their first single ‘Night of the Witch‘ of the upcoming new album, giving us a bit of a sneak preview how the coming years of touring might sound like. I for one can’t wait to see them again and hope that they’ll drop by Finland again once ‘Titans of Creation‘ is out in the world.

Setlist:
Eerie Inhabitants
The New Order
Practice What You Preach
Into the Pit
Raging Waters
The Haunting
Brotherhood of the Snake
The Pale King
The Preacher
Night of the Witch
Over the Wall
Disciples of the Watch