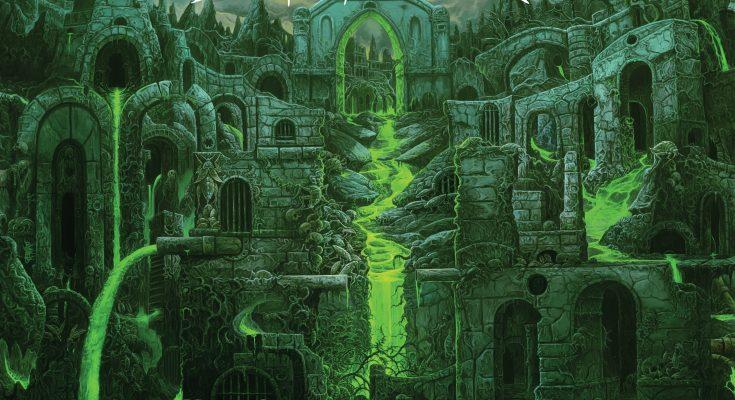 There’s this funny theory that only one in two The Black Dahlia Murder records is actually good. While I can kinda see where people are coming from with this, such a statement has to be considered utter nonsense. I must admit I only truly started to pay attention to TBDM when ‘Deflorate‘ came out, which some fellow fans will say is a terrible place to start. While I completely disagree, I do want to reassure you once I heard that gorgeous record back in 2009, I immediately started digging around in their older material. At that moment I thought ‘Unhallowed‘ was pretty good, but ‘Miasma‘ and ‘Nocturnal‘ would become some of my favourite albums ever. To this day I can’t erase them from my playlists. TBDM rules and will always be one of my very favourite bands.

My expectations after ‘Deflorate‘ were so high that some releases after that one required more than one spin for me to find the more memorable songs. It seemed I had a harder time adjusting to more recent albums. I had a issues at first with ‘Ritual‘ and its darker ambiance, but I managed to find my heartthrobs like ‘A Shrine to Madness’, ‘Malenchantments of the Necrosphere‘, or even ‘Carbonized in Cruciform‘, which has some of the best riffs TBDM has ever put out. ‘Everblack‘ was even more challenging until I was completely hooked to vocalist Trevor Strnad‘s singalong poetry. I can still bellow the lyrics to ‘Into the Everblack‘ and ‘Raped in Hatred by Vines of Thorn‘ like my life depends on it.

Then came ‘Abysmal‘, which I think is their most interesting work since ‘Nocturnal‘. Like the latter, it had everything: catchy lyrics, memorable riffs, insane drumming,… You name it. I was blown away again. After such a strong release ‘Nocturnal‘ was a bit of a letdown. Sure, it has a few memorable moments but I was done with it rather fast.

The Black Dahlia Murder now bring us their ninth full-length album ‘Verminous‘, the eponymous single of which sounded very promising. It immediately piqued my interest thanks to its memorable riffs. This is TBDM true to form: a perfect blend of American-style and Swedish-style melodic death metal, which carries on throughout the record. You can tell long-time guitarist Brian Eschbach is working hard to preserve that typical TBDM sound, despite the many line-up changes for his counterpart. ‘Removal of the Oaken Stake‘ and ‘How Very Dead‘ clearly make you feel right at home.

On the other hand, it doesn’t mean you can’t appreciate Brandon Ellis as a more than worthy addition to the band since ‘Nightbringers‘. The guy brings a very palpable energy to the music. I’m positive I’ve heard very new things on ‘Verminous‘. ‘Sunless Empire‘ and ‘The Leather Apron’s Scorn‘ contain riffs and hooks which will definitely surprise you. Drummer Alan Cassidy keeps up like no other thanks to his tremendous technical range. This is a drummer who’ll lull you into a false sense of security before performing some out-of-this-world blast beat, that’ll just knock you over. Take the closing song ‘Dawn of Rats‘, for instance.

I don’t often get the chance to talk about the bass lines of a record, simply because they often disappear in the background but, damn, does Max Lavelle shine on ‘Verminous’. Don’t believe me? Simply listen to ‘Child of Night‘ and tell me you don’t hear that ominous slapping. Speaking of ominous, or downright threatening, Papa Trev is back with full force with some of the most ferocious shrieking he’s ever done. The only thing I’m missing are those passages I can sing along to. There are hardly any present.

Indeed, for all their undeniable technical prowess I just can’t shake the feeling there’s some true originality lacking. Don’t get me wrong, ‘Verminous‘ is a great, true-to-form The Black Dahlia Murder record, but I’d really hoped for more memorable moments. Some songs do get me there: my personal favourites are ‘Verminous’, ‘Godless’, ‘Sunless Empire’ and ‘Dawn of Rats’. But in the end I’m missing the exhilaration I’ve felt on some previous, better records.