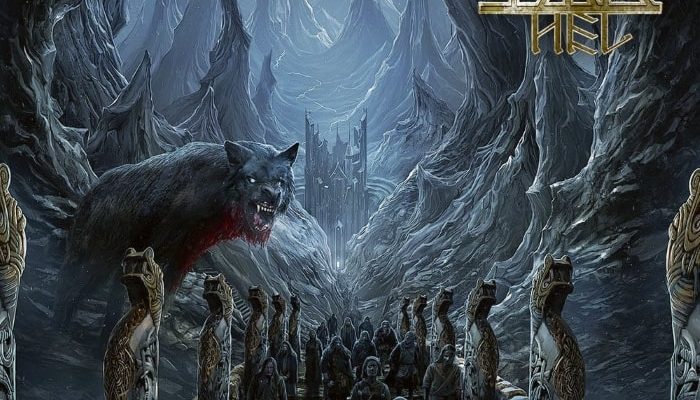 It never took Tyr so long to drop a full-length album, but 6 years after ‘Valkyrja’ it’s finally time for their eight album ‘Hel’. The band toured hard in the meantime, but that’s not the only reason it took them so long.

“We approached this one differently because I learned that if I continue ding albums in the way we had up to now, I would die from a heart attack before I’m 50! That’s one of the reasons we changed our method and took such a long time on this one.” – Heri Joensen (vocals, guitars)

‘Hel’ is a collection of ruthlessly melodic and progressive metal and conceptually, the album is informed by a combination of mythology, personal experience and observations of current international events.

“Hel is the realm of dath in Norse myhology, the underworld where those who die a natural death, not in battle, go. A bit confusingly, it is also the name of the goddess who rules over the same realm. She’s the daughter of Loki and a terrifying creature to look upon. Being so close to the album, it’s almost impossible for us in the band to have an objective opinion about it, but my impression is that it’s a more diverse collection that’s also more extreme in some ways. There are more instrumental passages than on ‘Valkyrja’, and there are a lot of guitar and bass details. I really feel we’ve realized the vision we set out to crate all those years ago, and as I listen through the album, I am satisfied with every aspect: the epicness, the intricacy, the melodies and harmonies, and the sheer heaviness of it. I love the whole atmosphere of it.” – Heri Joensen

“Musically it leans a bit towards our album ‘Ragnarok’. It’s a bit more epic and also much better worked through any of our previous albums.” – Gunnar Thomsen (vocals, bass guitar)

The album cover shows us cloaked people walking over a bridge under the supervision of a wolf covered in blood and according to the title, I believe they’re on their way to hell after being killed by the wolf. I really like the colours Tyr used here. The combination of black and blue brings the darkness in a forest by night and the golden accents just fit in. ‘Hel’ is available as a physical CD, but you can also download a digital version. Too old fashioned? You can also stream the album on Apple Music and Spotify.

Where does hell begin? Just like heaven at the gates, and Tyr knows that too. With ‘Gates Of Hel’ this album begins at the right place with a guitar-intro. It begins with an acoustic guitar and a bit later the electric guitar joins. Bit by bit the other instruments join as well and make this song a nice start without rushing the pace. There’s also a nice combination of grunts and clean vocals. Well, for as far as we can call Joensen‘s vocals clean, because we all know he has a slightly rough voice.

In general, the emphasis is on the guitar work, there are a lot of guitar solos in the bridges. Another element that is strongly present is the harmonious polyphony, which is recognizable for loyal fans of Tyr. Those loyal fans also know that Joensen‘s native language is Faroese and that he likes to stray from English. Tyr added two traditional Faroese ballads called ‘Alvur Kongur’ and ‘Ragnars Kvaedi’.

Not only those ballads bring variation, Tyr varies in tempo in their songs and also brings a calmer English song called ‘Sunset Shore’. I think this is the only English song that really stands out because the tempo is completely different from all the other songs.

‘Hel’ contains all the musical elements we are used to from Tyr, and which are also their trump cards. They remain true to themselves and to the style they have created over the past 20 years. This album was definitely worth the wait.