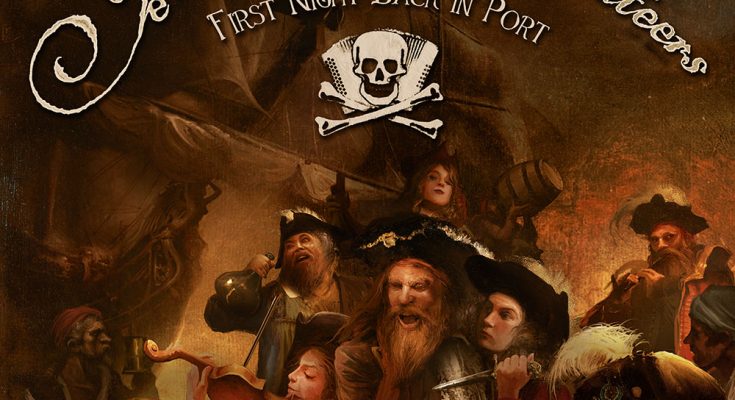 When receiving First Night Back In Port from Ye Banished Privateers, I thought I’d get another one of those “pirate metal” bands that try to copy the success that bands like Alestorm and such have reaped. But no… not at all! For those that are confused right now: this is NOT metal! Not even rock. What this is, is a pirate-themed folk release from a substantial Swedish band (near 30 members, one for one responsible for at least one of the wide range of instruments used) that just wants to take you back to the good old days when pirates ruled the seas. Now that I’ve set the record straight, put yourself into the right mindset to appreciate this music and join in on what probably is one of the coolest releases of Napalm Records this year! 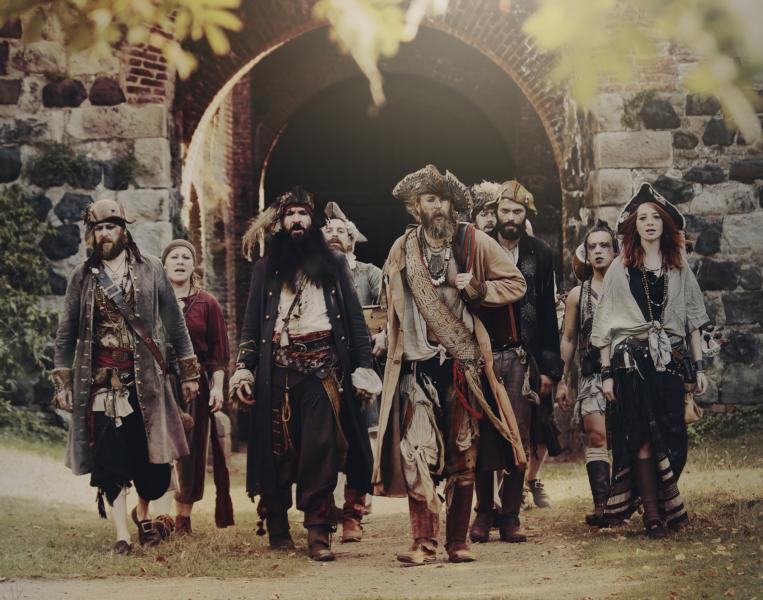 Like they say themselves, their aim is to take you on a journey 300 years back in time when life at sea was harsh and often cruel. And even though they use as their main inspiration Irish and Scandinavian folk songs, they somehow really manage to make you imagine being in the jolly yet dangerous surroundings of Blackbeard, Long John Silver and many other privateer legends. The songs range from emotional, intimate and almost sad songs like opener Annabel (with a very clear Irish touch) to bold and rambunctious chants that’ll take you to the atmosphere of alcohol loaded parties at their hideouts.

One of those pirate party songs comes early on with First Night Back in Port, telling you all you need to know with a chorus like “Let’s drink, let’s fight! Let’s fornicate by the harbour lights! Let’s fuck, let’s bite! Let’s dance away the night!”. I’m completely ready for that party so let’s buckle up and join the fray! On a side-note: definitely check out their 360 degree video for the song, it’s one of the best uses of this kind of video I’ve seen in a long time in which you can actually join the group of misfits in their festivities.

With the following songs All the Way to Galway (singing about their love for Galway) and Cooper’s Rum (singing about their love for… surprise surprise… rum) they continue down the path of festive sounding tunes, with for me personally the latter really being a highlight singing along at the top of my lungs. The female vocals with some grain to it combined with the background “choir” works so well together that I can’t help but grin and look for my bottle of “Kraken rum”… And overall, the vocals on every song are top notch and fit the total atmosphere of their music perfectly, going from clear female voices to the earlier more grainy ones to pure male voices and raw and deep male rumblings, and all combined in shouts and chants. Every single one of them I can imagine coming straight from someone born and raised in the midst of buccaneers. I Dream of You brings what you can see as their version of a love song without getting too sappy, get ready to singalong to the lyric video and have it stuck in your head for quite a while…

A Declaration of Independence starts off with a more intimate feel, somehow reminding me somewhat of the “Misty Mountains” song of the dwarves in The Hobbit. As you already could’ve guessed they’re singing about why they choose for the pirate life and their fight for independence from cruel and untrustworthy rulers. After that first calm start, they quickly pick up the pace by portraying their fighter spirit into yet another one of those huge singalong chants. But if you really want to throw yourself into shouting and dancing along to their tunes, we present you fan favorite and camaraderie feeling inducing We Are Ye Banished Privateers! For this one they made a little video themselves with parts of their live shows at Castlefest and some of their fans dressed up and singing along to the song as a thank you for all the support. Check it out, ’cause it shows you what a damn awesome group of people this is!

And their stories continue with Bosuns Verses in which they tell about Bosuns, who is a broken and ugly man that went through many misfortunes in his career but somehow always returns. Another highlight for me is the almost 10 minutes long Devil’s Bellow: the story of a pirate striking a deal with Satan to get a devilish “squeezebox” or accordion with a very infectious chorus. If there was one song though that made me laugh out loud and grin even wider than before, it would be Ringaroo at Cooper’s Inn… sounding almost like a song to sooth a baby into sleeping, but bolstering the lines “Ringaroo fuckaroo, Cocks and cunts and fuck you too!”. Oh yes, I was shouting along to that soon as well. Ending this impressive piece of pirate folk with the much calmer song Mermaid’s Kiss (including the sounds of a storm brooding in the air), I just couldn’t believe I hadn’t heard of these guys before. Thank you for backing this rowdy bunch, Napalm Records!