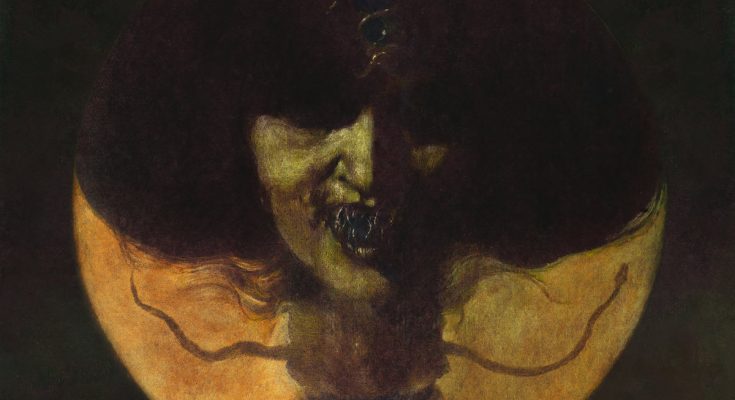 Debemur Morti Productions presents the third album of Colorado based black metal entity Akhlys. Formed in 2009 by the multi-instrumentalist Nas Alcameth (Nightbringer, Bestia Arcana, Aoratos), it gradually transformed an ambient oeuvre of lush atmospheric drones into black metal. Named after the ancient Greek goddess who was the keeper of death mist according to some ancient cosmogonies, Achlys was the personification of death and misery. With Akhlys mastermind Nas Alcameth has created a vessel to channel his frightening nightmares into an aural experience. From this sophisticated and architectural dream world the music broods into the dreadful dimensions of black metal. Extracting unspeakable nightmare visions from the mysterious realms of darkness, ‘Melinoë‘expands beyond the musical works of the sophomore ‘The Dreaming I‘ and transcends further into the spooky and otherworldly spheres of chaos.

Nas Alcameth summons the supreme forces of darkness as the songs move ostensibly into spellbinding swells and swift, droning riffs. The use of subtle synth work on the album is beautifully detailed, taking patterns from the likes of Limbonic Art. In recent years Nightbringer took the U.S. black metal to new heights and with the latest creation mastermind Nas Alcameth and Eoghan (drums) redefined their musical concept. One of the strongest elements of ‘Melinoë‘ is the use of the high pitch rasps and the implementation of tremolo-picked riffs. Despite the subtle symphonies, Akhlys‘ song dynamics are focused on ambient and hypnotic segments. Nas Alcameth unwraps an unprecedented method for his songwriting. The songs morph into fast, blistering tempos, carried by tremendous blast beats and dark sinister riffs. To a certain extent ‘The Dreaming I‘ and ‘Melinoë‘ share a lot of similarities, but the songwriting approach goes way deeper. The multi-instrumentalist employs impressive measures of aggression merging aesthetic guitar lines and abundant textures.

Just moments after the sinister silence of the opening track ‘Somniloquy‘ the scathing tremolos immediately penetrate through the veil of mystery forging an appalling opus. The massive guitar arrangements are paired with the ominous rasps of a demon’s dialect while the whirling vortex of the drums boasts great velocity. Akhlys‘ unparalleled idiosyncrasies create many theatrical qualities where the songs are empowered by an effective musical amalgamation. One of the songs that reveal the mastery of Nas Alcameth’s musical abilities is the sophistically elaborated ‘Pnigalion. Wrought by a dense and textural synth that displays multiple layers of swelling cacophonies, the spectral effect of the unique guitar qualities melds the sludgy riffs and tremolos in a dynamic way.

The songs blast out at a constant fury. There is a fine distinction between Nightbringer, Aoratos and Bestia Arcana. Within the sonic palette the duo creates a haunting world of awe and beauty. The synth patterns sound marvelous and form a bewitching backdrop to the music. Akhlys slowly drags the listener to the dark realms of misery and death. ‘Melinoë‘ consists of five lengthy tracks where each entry feels like an endless soundtrack of horror. While each track varies from the other, ‘Succubare‘ falls under the ambient atmosphere of disturbing resonance as it slowly forms a dark foreboding sense where the subterranean synth produces an uncanny effect.

Whereas the opening of the fourth track ‘Ephialtes‘ begins with a distorted symphony that sounds like a strumming violin, the song eventually turns into a blazing cauldron. The drums focus on the mid-tempo: there is some kind of balance between the mid pacing drums, blast beats, melodies and the grim ambiance that is combined with blazing riffs. For almost ten years Nas Alcameth has taken Nightbringer and Akhlys to an incredible artistic achievement and on the latest output, he has reached the pinnacle of evolution. Akhlys‘ musical style is also akin to the latest Nightbringer albums such as ‘Ego Dominus Tuus‘ and ‘Terra Demnata‘. The songs are heavily atmospheric and oriented towards furious tempos.

The grandiosity of the album closer “Incubatio” is brought by the scale of the subtle symphonies. Once the drums accelerate to lightning speed, the high-pitched rasps add reverb upon the thick layers of the tremolo. The droning atmosphere of the synth demonstrates high musical arrangements. Nas Alcameth has once again conveyed a sublime symphony of nightmares. ‘Melinö‘ is beautifully crafted by multilayered instruments. This is definitely one of my favorite releases of the year. Highly recommended for fans of Limbonic Art, Nightbringer and Aoratos.