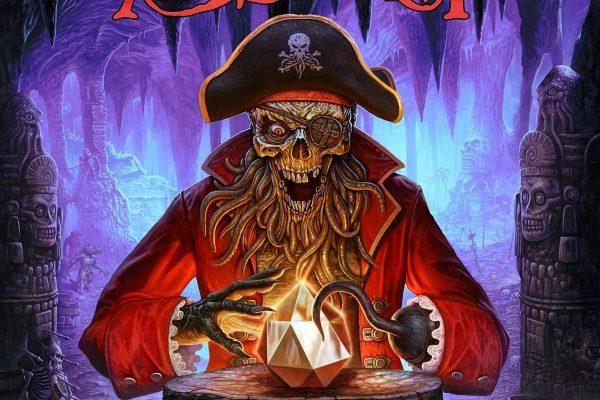 Alestorm is back with a new album. We know what to expect from them. Parties, pirates and booze. That’s exactly what the first song ‘Treasure Chest Party Quest’ is like. Although, it seems like it’s a bit too much party on that one. The sound is Alestorm, but drowned in neon lights.

‘Zombies Ate My Pirate Ship’ is a bit what I was looking for on this album. More power into the song. Not just party, but also that raw metal that Alestorm usually has. Up until this point there has been a lot of partying, but not so much music to rock out to. ‘Party Metal Drinking Crew‘ also touches this power a bit, but there’s still not that much headbanging to be done.

‘Wooden Leg’ continues after 6 years! This song was on ‘Sunset of the Golden Age’, released in 2014. ‘Wooden Leg part 2 (The Woodening)’ continues the story of the guy with a wooden leg. Part one was very fast, part two isn’t. It rocks though and it starts fast. But I’m still missing the Alestorm power from previous albums. I do adore the anime sounding, Japanese part in there, followed by a Spanish part. They turned it into a very funny sequel if you listen closely to the lyrics. I’m also getting a strong Star Wars vibe from this for some reason.

What’s cool on this album are the guest artists joining Alestorm on their treasure hunt. There’s Ally Storch from Subway to Sally, who’s doing the violin for the entire album. There’s Vreth from Finntroll, who’s doing vocals on ‘Chomp Chomp’. And then there’s Captain Yarrface from Rumahoy! joining on ‘Tortuga’.

With this album I found myself distracted. I like the songs. They definitely scream party but they lack the power of pirate metal. It is still Alestorm, but not as loud and rough as we are used to. The headbanging is gone for some reason. A good pirate metal song with that party element that they use so much on this album would do the trick, but it seems to me like they are a bit too much on the party side. Alestorm is embracing the booze and ‘yar har’, but not so much the headbanging.

I have to say that the album grows on you a little. After letting the ship sink in, you hear the dog barks in the songs and other little funny details and the album makes you dance. Like I said before, if you listen closely to the lyrics, it’s a very funny album. And even though it wasn’t what we expected, it’s still decent and I can’t wait to hear it live. We’ll probably miss out on some mosh pits, but we won’t miss out on rowing on the floor and partying with beer in our hands.

TAGalestorm christopher bowes curse of the crystal coconut Napalm Records Pirate Metal releases reviews
Previous PostCosmic Putrefaction - The Horizons Towards Which Splendors Wither Next PostInterview to live among wolves - "Give your local band a chance, try to support your local scene"

One thought on “Alestorm – Curse of the Crystal Coconut”