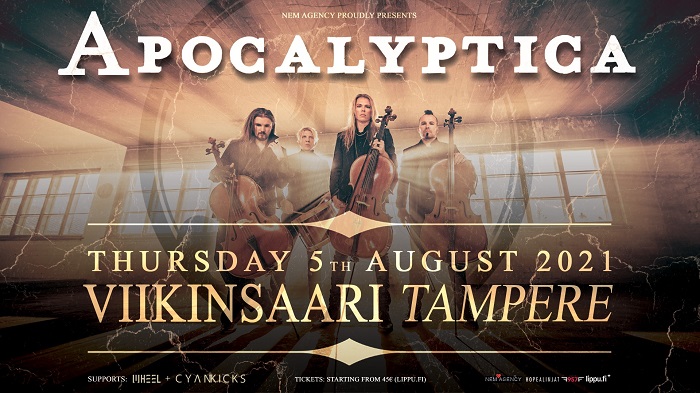 Every year the last 6 years, the Tampere island Viikinsaari has been taken over by the metal festival SaariHelvetti (or “The Island of Hell”). This year, it’ll be the 7th time the festival takes up shop on the island and the 3th time they spend a total of 2 days there with some of the best bands Finland (and beyond) have to offer. Though this year around, Nem Agency, the booking and promotion agency behind the festival, decided that having everything set up for the festival delivered the best possible opportunity to bring even more bands to the island and stages there. So, here we are: the night before the festival gates officially open, with Apocalyptica, they are hosting the iconic and innovative masters of “classical metal”. And coming along with them are Finland’s newest exciting prog outfit Wheel and the extremely catchy and energetic alternative rock band Cyan Kicks!

It’s been only 2 weeks since we last saw poppy alt-rock outfit Cyan Kicks rocking the stage, but we were really looking forward to see what they would do with a much bigger stage in broad daylight. And we have to say that they came, they saw and they conquered… if not the stage, then many hearts of those there at the show. Sadly the stage didn’t seem to be that much bigger than where we last saw them due to the drum kits of every single band already being set up. But the space they had, they filled with their seemingly endless energy with Susanna Aleksandra dancing around, bassist Leevi regularly taking some air and even guitars flying around. We heard many of our personal favorites like ‘Tidal Wave‘, ‘Satellite‘ and ‘Gasoline‘ pass by and quite a couple of tracks from their latest EP. Musically everything sounded on point and they radiated the confidence of a band that knows what they’re doing. Keep an eye on Cyan Kicks, they’ll climb high up the ranks the coming years!

Setlist:
The Flood
Tidal Wave
Beat of My Heart
Satellite
I Want You Gone
Feathers
Wish You Well
Endgame
Gasoline

Wheel has been a favorite among our editorial staff for a while now. In 2019, they caught most of us by surprise with their ‘Moving Backwards‘ debut full-length album and ever since we’ve been following them up close. Since then they’ve gone through a couple of line-up changes and have recently released their 2nd full-length with ‘Resident Human‘ and their show here was their very first with that new album under the belt AND with the latest addition of Jussi Turunen on guitars. Besides it being a pleasure to see these guys gracing a stage again, it was an absolute delight to hear the tracks of their amazing new album live. Much to our surprise, the hoods that usually hid their faces most of the time were gone and we’re curious to see if that’s a permanent change or if they just didn’t bother to put them on since the show was in the middle of a relatively warm Summer day in broad daylight. The positive side of that, is that we were able to see the full range of emotions and passion every member goes through while playing their intricate and at times trance-inducing music. As to be expected, this was an absolute stellar show from start to finish with mostly songs from the new album and they sounded amazing blasting from the stage’s speakers, seemingly flowing out of them with ease. Add to that the fact that James has become seemingly much more relaxed on stage, which meant we got to enjoy his dry British humor more than once, and this was a highly enjoyable interlude to the legendary masters of innovative metal music later that evening. Personally, I’m looking forward to see this same show in more of an intimate or indoor setting because their music just works even better when they have control over creating the atmosphere that amplifies the already amazing music. Get to it soon, boys!

When I was a teenager, I discovered Apocalyptica through their amazing collaboration with Sandra Nasić from Guano Apes. After hearing that track, I was completely hooked on the unique sound these Finns brought into the world and I immediately ordered ‘Plays Metallica by 4 cellos’ and ‘Inquisition Symphony’. Which blew my mind even more with their amazing instrumental covers and mesmerizing originals. So for me personally, it’s always an absolute pleasure to catch these cellists live. It was the first time we caught a show of theirs after last year’s release of ‘Cell-0’, which was a much applauded return to their roots of all-instrumental music. Of that album there were about 5 tracks featured in the set with intro ‘Ashes of the Modern World’, title track ‘Cell-0’, ‘En Route to Mayhem’, ‘Rise’ and ‘Scream for the Silent’. Besides those, there was a healthy and diverse selection of past releases going from their old cover classics with Metallica‘s ‘Nothing Else Matters’, Sepultura‘s ‘Inquisition Symphony‘ and Edvard Grieg‘s ‘Hall of the Mountain King’ to originals like ‘Path’ and ‘Grace’. There were a couple of albums and tracks that I was missing a little bit, but since they already have quite the extensive catalogue, there will always be tracks missing. For a handful of tracks a guest vocalist appeared under the form of Tipe Johnson, who provided the vocals for tracks like ‘I’m Not Jesus’, ‘Not Strong Enough’, ‘Shadowmaker‘ and ‘I Don’t Care’. And while it was fun to see these tracks being brought live, most of those I only truly appreciate with the original guest vocalists (like Corey Taylor, Brent Smith,…) and I would have preferred to get somewhat more of a serving of their instrumental “classics” instead. But this totally didn’t spoil the gig and after almost 3 decades of being around, these guys simply can’t bring a bad show even if they tried.

For more pics of the night by Vaim Hull Photography, go here.